(Feb. 26, 2016) — On Tuesday, The Post & Email revealed in an exclusive report that the New York State Board of Elections (NYSBOE) had sidestepped on issuing a determination as to whether or not Sen. Ted Cruz, Sen. Marco Rubio, and former Louisiana Gov. Bobby Jindal are “natural born Citizens” as required by Article II, Section 1, clause 5 of the U.S. Constitution for the office of the president.

A number of ballot objections were heard on Tuesday morning, including three from Tonawanda resident and registered voter Robert Laity.

Cruz and Rubio remain in the presidential contest, while Jindal suspended his campaign in November.

On Thursday, Laity provided The Post & Email with three letters from the NYSBOE formally conveying its findings that “the objection raises issues which are beyond the ministerial scope of the State Board to determine and such objection is made in the incorrect venue, as no direct election for President of the United States occurs via election day ballots.”

The Republican Party has not responded to numerous letters and phone calls which have raised the question as to whether or not Cruz, Rubio and Jindal are “natural born Citizens.”  One such individual wrote a hypothetical news release and letter early last year foreshadowing the nomination of a constitutionally-ineligible candidate over which the opposing political party would successfully sue to remove from the ballot and win, leaving little opportunity for an eligible candidate to mount a campaign prior to the November 2016 election.

Since 2007, when Barack Hussein Obama sought the presidency for the first time, the meaning of the term “natural born Citizen” has been vigorously debated among politicians, law professors, citizens, constitutional scholars and attorneys, political pundits and the Congressional Research Service (CRS).  Some parties maintain that a birth within the U.S. is sufficient to meet the “natural born” requirement, as with CRS, while others, citing 18th-century Swiss philosopher Emmerich de Vattel’s “The Law of Nations” and other sources, maintain that a child’s citizenship is established by that of his parents or father.

According to the National Archives’ website, between 1790 and 1922, immigrant women who married U.S. citizens automatically became citizens themselves.  It was not until 1934 that a U.S.-citizen mother, by congressional statute, could pass her American citizenship to a child in the absence of her husband’s U.S. citizenship.

All congressional statutes were passed after the ratification of the Constitution in 1789.

Cruz was born in Calgary, Alberta, Canada on December 22, 1970 to a father from Cuba and a mother from Delaware. By virtue of a Delaware statute which provides for the release of vital records 72 years of age or older, The Post & Email was able to obtain a certified copy of Eleanor Darragh Cruz’s long-form birth certificate showing that she was born, as Cruz has claimed, in Wilmington on November 23, 1934.

Cruz claims to be a strong supporter of the U.S. Constitution but has released no documentation showing that he was ever designated a U.S. citizen “at birth,” as was reported on August 18, 2013 by The Dallas Morning News.  While denying at that time that he held Canadian citizenship, he renounced it nine months later.  Last month, CNN reported that a classmate at Princeton recalled that Cruz had voiced awareness of his dual citizenship but generally identified himself as “an American.”

In Cruz’s official biography, he states that his father, Rafael Bienvenido Cruz, came to the United States in 1957 to escape the turmoil in Cuba preceding the Revolution which placed dictator Fidel Castro in power for more than five decades. In Thursday night’s debate, Cruz again related that his father allegedly arrived in the U.S. with $100 and washed dishes for $.50 an hour to put himself through college.

The New New York Times and other outlets have questioned the narrative Rafael and his son have told of Rafael’s struggles in a new land. Last May, Buzzfeed reported that while at the University of Texas, Rafael participated in protests aimed at having supporters of Castro’s opponent, Fulgencio Batista, deported and repatriated to Cuba.

Obama plans on visiting Cuba next month to discuss as-yet undisclosed subjects with communist dictator Raul Castro, who assumed rule of the island in December 2008 when brother Fidel’s health deteriorated.

Ted Cruz claims that he meets the “natural born Citizen” requirement by having been born to a U.S.-citizen parent, regardless of his birthplace. His father, who interviewed several weeks ago with Carl Gallups of “Freedom Friday,” agrees. Father and son have both cited the Naturalization Act of 1790 as the basis for their contention without revealing that the statute was repealed and replaced five years later, omitting the reference to “natural born Citizens.”

Rubio was born in Florida in 1971 to two Cuban immigrants who had not yet become U.S. citizens. In Thursday night’s debate in Texas, Rubio referred to his mother as “an American,” but it was unclear as to whether he meant before or after he was born.

At the Constitutional Convention of 1787, the Founders had originally planned to require that the president be simply “a Citizen,” as is required of U.S. representatives and senators, but a letter written by Founding Father John Jay to George Washington, who presided over the convention, appears to have influenced those in attendance to elevate the requirement to “natural born Citizen.”

The modern media often conflate the two terms without explaining the historical importance of the differentiation.

No major media outlet has challenged Rubio or Cruz on his eligibility.  Through a number of FOIA requests made over the last 11 months, The Post & Email has thus far discovered no question in Cruz’s documentation for positions held in either Texas or the federal government inquiring if he were a U.S. citizen.

Both Cruz and Obama have referred to questions about their eligibility as “silliness.”

On Thursday, Gunlaws.com owner Alan Korwin wrote in an editorial on the “natural born Citizen” subject: 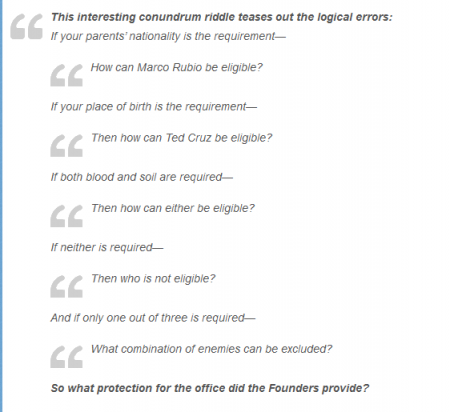 In 2012, as Obama sought re-election, ballot challenges were filed in New Jersey, Illinois, New York, Georgia and several other states asserting that he was not a natural born Citizen, some solely by virtue of his claimed birth to a British-citizen father. All of the administrative law courts and election boards which heard objections ultimately placed Obama’s name on the state ballot despite the fact that a criminal investigation conducted by the Maricopa County Cold Case Posse had found, and formally announced, that Obama’s long-form birth certificate posted on the White House website stating that he was born in Honolulu, HI is a “computer-generated forgery.”

Obama’s Selective Service registration form, sent to an unknown number of individuals placing requests through the Freedom of Information Act dating back to 2008, was also declared fraudulent.

The New York Times and other mainstream media have not questioned Obama’s life narrative.

Congress has refused to investigate the conclusions of forgery in Obama’s documentation and has not spoken as a body on the definition of “natural born Citizen.”

A webcast of the NYSBOE’s February 23 meeting can be viewed here.

The wording of the three letters sent to Laity is similar. They can be read here: