(Feb. 15, 201) — Today is February 12, 2016 and it’s the day after another attack by those quintessential Americans that are woven into the very fabric of America and without whom, George Washington would only be known for growing hemp.  You know the ones, those refugees from Muslim nations. Yeah, the ones President Obama said Thomas Jefferson, Benjamin Franklin and John Adams had such high regard for. This time it was at a restaurant in Ohio where a young Somali “refugee” went into the restaurant, asked if the owner was there (a Christian from Israel), (1) left, then came back into the restaurant with a machete and started hacking the customers with it. At least four were seriously wounded but all are expected to live. After attacking the restaurant patrons, the assailant fled and later tried to attack police with a knife and his now blood-smeared machete. The police, knowing that guns beat knives fairly often, sent him on his way to hell.

In December it was a Christmas party in San Bernardino where a husband-and-wife “team” killed 14 people and wounded another 21. The husband, Farook, was an Illinois native, while Malik had emigrated from Pakistan. Both chose death by cop. (2)

These are just two of the multitudes of attacks (3) by the very Muslims President Obama has praised on almost as many occasions as he has played golf or taken a vacation. One such occasion was in a speech in Cairo, Egypt in 2009 where he said “I also know that Islam has always been a part of America’s story.” (4) He again made that statement in 2010 to celebrate the start of Ramadan. (5) In early 2014 Obama stated “Eid also reminds us of the many achievements and contributions of Muslim Americans to building the very fabric of our nation and strengthening the core of our democracy.” (6)

“In all the reading I’ve done, thousands of books, there’s nothing there [relating to Islamic contributions in early America],” Barton said on Friday. “I mean, we know that Muslims were the folks who captured the slaves sent to America, largely out of Africa…. The Muslims did the slave hunting and the slave trading, et cetera. The first Muslims came to America as a result of the Muslims capturing them and sending them to the Dutch traders.” (7)

But as is often the case with Barack Obama, our factually-challenged President, when his lips are moving, he is generally lying. His next set of statements sent the truth-o-meter into cardiac arrest when he said “Here in America, Islam has been woven into the fabric of our country since its founding. Generations of Muslim immigrants came here and went to work as farmers and merchants and factory workers, helped to lay railroads and build up America. The first Islamic center in New York City was founded in the 1890s. America’s first mosque [founded in 1929] — this was an interesting fact — was in North Dakota.” (8)

And most recently, on February 03, 2016, Obama stated: “Islam has always been part of America. Starting in colonial times, many of the slaves brought here from Africa were Muslim.  And even in their bondage, some kept their faith alive.  A few even won their freedom and became known to many Americans.  And when enshrining the freedom of religion in our Constitution and our Bill of Rights, our Founders meant what they said when they said it applied to all religions.”

“Back then, Muslims were often called Mahometans.  And Thomas Jefferson explained that the Virginia Statute for Religious Freedom he wrote was designed to protect all faiths — and I’m quoting Thomas Jefferson now — “the Jew and the Gentile, the Christian and the Mahometan.”  (Applause.)

“Jefferson and John Adams had their own copies of the Koran. Benjamin Franklin wrote that “even if the Mufti of Constantinople were to send a missionary to preach to us, he would find a pulpit at his service.”  (Applause.)  So this is not a new thing.” (9)

The funny thing is his view of the way the Founding Fathers viewed Islam does not quite match up with the statements left behind by the Founders themselves. For instance, Benjamin Franklin stated, “Nor can the Plundering of Infidels be in that sacred Book (the Qur’an) forbidden, since it is well known from it, that God has given the World, and all that it contains, to his faithful Mussulmen, who are to enjoy it of Right as fast as they conquer it.” (10)

Thomas Jefferson asked a Barbary Muslim emissary how the Barbary pirates justified their murder, plundering and slavery of others and recorded this as the answer: “The Ambassador answered us that it was founded on the Laws of the Prophet, that it was written in their Koran, that all nations who should not have acknowledged their authority were sinners, that it was their right and duty to make war upon them wherever they could be found, and to make slaves of all they could take as prisoners.” (11)

John Adams, in a letter to Thomas Jefferson on 07/16/1814, stated Mohammed “a military fanatic” who “denies that laws were made for him; he arrogates everything to himself by force of arms.” (12) And while he did own a Koran, in the preface was written this:

“This book is a long conference of God, the angels, and Mahomet, which that false prophet very grossly invented; sometimes he introduceth God, who speaketh to him, and teacheth him his law, then an angel, among the prophets, and frequently maketh God to speak in the plural. … Thou wilt wonder that such absurdities have infected the best part of the world, and wilt avouch, that the knowledge of what is contained in this book, will render that law contemptible …” (13) 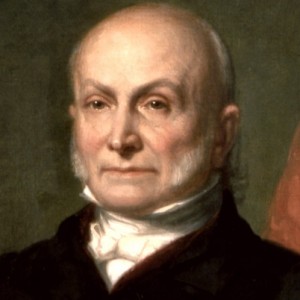 “In the seventh century of the Christian era, a wandering Arab of the lineage of Hagar, the Egyptian, combining the powers of transcendent genius, with the preternatural energy of a fanatic, and the fraudulent spirit of an impostor, proclaimed himself as a messenger from Heaven, and spread desolation and delusion over an extensive portion of the earth. Adopting from the sublime conception of the Mosaic law, the doctrine of one omnipotent God; he connected indissolubly with it, the audacious falsehood, that he was himself his prophet and apostle. Adopting from the new Revelation of Jesus, the faith and hope of immortal life, and of future retribution, he humbled it to the dust, by adapting all the rewards and sanctions of his religion to the gratification of the sexual passion. He poisoned the sources of human felicity at the fountain, by degrading the condition of the female sex, and the allowance of polygamy; and he declared undistinguishing and exterminating war, as a part of his religion, against all the rest of mankind. THE ESSENCE OF HIS DOCTRINE WAS VIOLENCE AND LUST: TO EXALT THE BRUTAL OVER THE SPIRITUAL PART OF HUMAN NATURE. [emphasis in the original]” (14)

So, as Europe collapses under the invasion of serial rapists, (15) perennial moochers (16) and chronic psychopathic (17) “refugees” from Muslim nations, Obama is busy rewriting history in order to bring more of these “peaceful” threads to be further woven into the “fabric” of the U.S. To allow this to happen is cultural suicide.

Quran (8:12) – “I will cast terror into the hearts of those who disbelieve. Therefore strike off their heads and strike off every fingertip of them.” (18)

Obama, Islam and Our Founding Fathers added on Monday, February 15, 2016