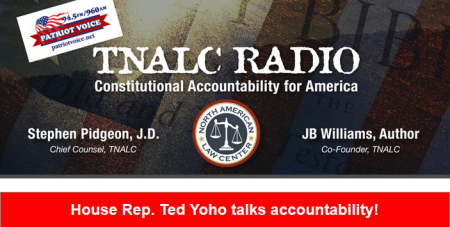 Last week’s TNALC Show is archived in podcast on demand HERE. House Representative Ted Yoho spoke about Obama Administration high crimes and misdemeanors for the full two hours….He stated that he would push forward in the House after that show and then report back this week. So Representative Yoho will be our special guest for the first hour this evening beginning at 5:00 PM ET

In the second hour, our special guest will be Veteran Defenders of America leader Colonel Jim Harding, USAF (Ret.)

You can also use the TuneIN app to listen to the show HERE.

Obama is “transforming America” at breakneck speed and only the U.S. House has the power to stop the final destruction of our Constitutional Republic.

Sadly, last week’s message resulted in one $20 donation to TNALC…. at the peak of our battle for freedom, liberty and constitutional accountability, supporters seem to have gone MIA….