WHO WILL CONFRONT “VILLAINS” AND “CROOKS?” 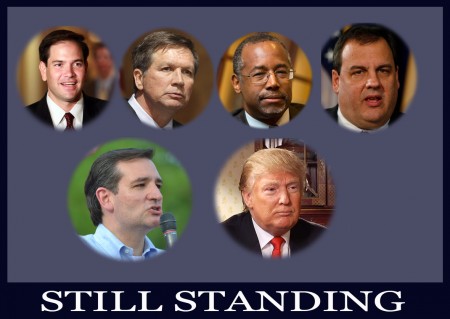 (Feb. 9, 2016) — The Republican Presidential Primary season has been in full swing now for well over eight months.  During that time we watched and evaluated each of the candidates as they lined up like dominoes in preparation for their eventual toppling by the leftist media.

The list was long, almost as large as the fantasy-driven self-conceptions of the various performers.  Lining up, typical as ever, were the same old tired establishment supported dreamers.  Many of which should have been evaluated for mental disorders as opposed to a seat in the White House.  Clones of McCain, Romney, and Dole proclaimed that this time, things would be different.  Even though the same spineless catering to the news media and the Democrats has failed to get these relics elected in the past, this time, it will work.  Psychiatrists have a word for that syndrome, it’s a very clinical term.  It’s called insane.

Meanwhile, America’s hardworking, law-abiding citizens were being terrorized by roving bands of illegal immigrants, their lives threatened by un-vetted Muslim Islamic murderers which Obama migrated, by the tens of thousands, into their neighborhoods, while doing all he could to disarm the honest people.  Plus, millions upon millions of men and women were languishing in not just unemployment, but also the knowledge that they were being abandoned by their government.  And what do they have to look forward to?  More failed tactics from the Republican Party and another four or eight years of fundamental destruction administered by the Leftist Democrats?  Well, it was beginning to look just like that.

As of this day, less than 24 hours before the first Primary where the voters will vote, as opposed to last week’s Caucus where establishment shenanigans were the order of the day, several candidates are still standing.  A few viable, but most of them, not so much.

It’s time to go down that list, evaluate them and relate why they have been proclaimed either in or out for an endorsement from TPATH.  Let’s begin.

THE BAD:
Governor John Kasich, a longtime Republican who has been a politician for decades.  He is as much establishment as any in the race.  John is in the mold of the moderate who will do nothing to change the direction of this country.  He will not support building a wall on our southern border.  He will not send unknown Islamic migrants back to where they came from.  He will go along with the Republican Party as they limp behind political correctness.  In other words, Mr. Kasich will be more of the same.

Governor JEB! Bush, is the darling of the establishment and a great disappointment to all of the pundits and geniuses entrenched therein.  They actually thought America would like to see yet another Bush in their White House.  His support for Common Core and open borders would in itself be enough to disqualify him, but that disqualification has been enhanced by the fact that he is Chelsea Clinton’s favorite Republican.  That puts him on my “no fly list.”  It’s difficult to agree with anything Jessie Jackson has ever said except for the time he declared, “Stay out da Bushes”.  Even “Hymie Town Jessie” isn’t’ wrong, all the time.

Governor Chris Christie, another longtime political hack who is favored by the establishment.  Not so much as Kasich and Bush, but he’s right up there.  Christie has governed over a “sanctuary state” while in debates acting as though he is against “sanctuary cities.”  He is dishonest and has lied during the debates on a least 4 occasions.  We here in New Jersey couldn’t believe the lies he told the rest of the country concerning life in the good ole’ Garden State.  Many here still have stomach-turning flashbacks of the Obama and Christie “bromance.”   Governor Christie is not on my “dance card.”

Senator Rubio, while not as adored by the party elites, is acceptable to them.  Why? Well, because he needs them, he needs their donations and he will do as he is told.  It was Rubio, don’t forget, who joined up with the “gang of eight” which would have given amnesty to millions of illegals.  Also, Rubio would be terrible in protecting the borders.  He has proven this by telling Spanish-speaking audiences one thing and the opposite to his English-speaking dupes.  This means two things.  The first is he was lying to one group or the other and the second thing is, he’s a liar.   These things are not the most important reasons for not voting for him.  The most important reason is at the time of his birth, both his parents were still citizens of Cuba.  That makes him ineligible to hold the office of the President of the United States.  Period!

Senator Cruz, has some very special honesty issues of his own. In the debate last Saturday he lied about CNN and the Carson issue.  He said that CNN did not correct their error about Carson leaving the campaign for 3 hours when in fact they had corrected it in less than five minutes.   Lying appears to be a common thread with these and most politicians, but that is no reason to think we have to accept it or ignore it.  There are for sure several other issues relating to financial filings and his relationships with the CFR.   You might consider asking him about that but he has proven he has a penchant for the fib.  So good luck with those questions.  As with Rubio, Mr. Cruz is also not eligible, under Article II of our Constitution to hold the office of President.  He knows it and many, many other people do, too.  Period!

Dr. Ben Carson, is a great guy.  A wonderful success story and someone any child growing up in tough places and under tremendous disadvantages could look up to and aspire to.  Ben, however, is out of his league in this world of terror and political battlegrounds.  While he is certainly a nice, pleasant man (when not wielding a claw hammer), America must have and needs someone tough and bold, aggressive and relentless.  None of those characteristics appear to be in the good doctor’s résumé.

Mr. Donald Trump, the first and most important thing about him is he is not a politician, and he is not loved nor liked by the GOP establishment, the media, or the Democratic Party.  Trump is not just disliked by these people; he is feared.  If there was no other reason than that to vote for him, he would get my vote.  But there is more, much more.

1. Trump has made many enemies over the years because of his ability to outmaneuver his adversaries.  He has been described by those competitors as aggressive and brutal.  Not one of them, however, has said that they had ever been lied to or cheated by him.

2. Some have said Donald’s word was better than a written contract with anyone else.

3. He saw the sorry pathetic group of people who declared they were entering the primary and he realized that America could not survive more of the same.

4. He decided to run for President at a great loss of personal wealth and enormous danger to both himself and his family.  He did this not for any reason except he feared where our country was being taken.

There may be, in some people’s minds, many reasons to not support Trump.  Some might say he’s arrogant, some might think he can’t do what he promises, some might not like his bluster or his tone.  If those issues are deemed valid and if in fact they are the only reasons for not supporting him and enough voters feel that way, America is destined to the cycle of perpetual cronyism, as there will never be accepted a man with the abilities needed to end it.

The reason he is hated and feared is really quite simple.  He has promised his supporters during his rallies to end corruption, find those who are doing it and put them in jail, he has promised to find and stamp out waste.  Trump looks into the camera and thereby the eyes of his followers and swears he will do this.  Some of you reading this may not be sure, but the establishment is made up of true believers.  That, my friends, is why all of them have aligned against him. He must be stopped.  Trump understands the danger he is placing himself in. Trump has nothing to gain financially and much to lose running for President.  His losses will be America’s gain. All we need to do is help him help us.

Others who do not like Trump will find themselves putting labels on him, believing what his enemies suggest he is or will do, all without any proof or reason except that it fits with their dislike of him.  That, of course, is how politics works.  And for sure it will always be so.

Some of the things I hear is that Trump is not conservative.  There is no real description of just exactly what that means. But what I do know is that every politician I have supported over the years who had called himself a conservative has gone to Washington and left his political dictionary home.

It is my belief that none, not one of the people running for the Presidency will change anything, will confront or the villains and battle the crooks.  None, that is, except Trump.  He may not be able to do what he has promised, but three things are certain.   He believes he can, he will try and not one of the others will.

TPATH is supporting Donald Trump, and I believe he is the only answer to the mess this country is in because of both parties.  God help and protect Donald Trump.  If we lose him, it’s doubtful our country will survive long enough for another to arrive.

EDITOR’S NOTE:  As result of blown gaskets please do not send me requests to be removed.  Each email has an unsubscribe button at the bottom.  So don’t waste my time or yours requesting it.   Here are the instructions to unsubscribe.