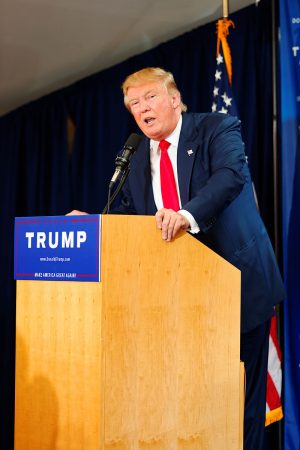 First of all, congrats and bravo to you for surviving the GOP, establishment and political labyrinth.  As you already know, assaults and hits come at you from every angle there is.  What EX wife can we get to trash Trump?  What child?  What employee?  On and on it goes.

One of my favorite evils you did….was daring to say 2 Corinthians vs.  2nd Corinthians.  Wow, you horrible Bible hypocrite and fraud…just think of it!   That certainly brought out your desperate foes in spades.  Suddenly, media ‘Wanna-be messiahs’ desperately looking for disappearing ratings and ways to cut you down referred to you as a fake Christian.  I heard Glenn Beck say many times that you had obviously never read the Bible before…then last week on his radio show, comparing your tactics in speech and working crowds to Adolph Hitler, molding his ‘brownshirts.’  Can we say “desperate” again?

You are obviously no dummy, know and see the almost comedic assaults, lies and gossip thrown around about you and your intentions. As a struggling and recovering entertainer, host, writer and personality myself, I can only imagine how many top-rated reality TV shows about you and your candidacy could be airing right now bringing in top-of-the-chart ratings.

Maybe these could be some of the show titles

“Trump, why do you degrade Women Island” starring Donald Trump and Megyn Kelly

“Just how naughty is Trump?” – No Bible Island

The desperate needs Obama and the sell-out politicians have left us with are too many to refer to, but the following are some of the largest assaults that must be undone and not talked about but really fixed.

Build Back our Military and Help our Vets

America MUST have a strong and healthy military again.  Obama has almost gleefully decimated it as he has also pulled back much-needed help and retirement benefits from tons of vets.  It is obvious that Obama hates our military.  Mr. Trump, we must have a President who will actually fix the incompetent, painfully slow and bureaucracy-poisoned Veterans Administration.  I pray that you will be the President who finally does build back our military and cleans up the Veterans Administration.  You have said that you would get our military fixed.  I am counting on it.  These are our heroes.

Thank you – thank you and thank you for stepping up immediately in your candidacy and drawing a real line in the sand, unlike most.  I believe you would really stop illegal immigration, build a wall and smash the amnesty idea being floated by both sides.   This is a national emergency leading to millions of stolen jobs, floods of Islamic terrorists and other criminals flowing across our borders. Schools, state services and medical establishments are going bankrupt, and America is being turned into an illegal ghetto, while we are all called names for not wanting that.  I am sick of being called everything in the book for years, having written about this and screamed about it on my former national radio show and would like to throw a few names back at American accusers for a change.  I believe you are the guy to do that with truth and flair.

As you know, the controlling establishment plays in the Disneyland of Tax complexity, and tax controls of the people.  We have been over-taxed for decades and it must stop.  I so appreciate your saying you will stop the obvious discrimination against married folks.  How many people like myself have had to pay tons of money in fraudulent and discriminatory taxes just because we did the right thing and got married?   We are punished…really?  I know you are looking at eradicating other unfair and unethical practices in the tax code…Thank you.  I am counting on you to follow through with this and more.

Mr. Trump, the masses also need a major overhaul and tax decrease with income tax.  Why not consider just a flat tax and eradication of all other usury taxes that make it very hard on families and businesses?  Perhaps everyone, poor and rich, could stop hiding, transferring or moving money around just to survive. How about we pay a small, point-of-purchase tax, whether the product purchased was a yacht or used sofa?

I have been a little concerned when I hear you say you want to increase the taxes for the wealthy?  I am most concerned about this part since I am one of those struggling people trying to get ahead and trying to get my crime drama – TV show funded and placed along with other hoped-for projects.  I was nearly killed 10 years ago in a well-publicized motorcycle wreck…ruining me.  I have tried to build back my life and career from nothing.  I want to create jobs, learn from my mistakes and struggles. Finally one day I want to make real money, bless my family and many others. Are you planning to take a big chunk of that because through hard work and long-term struggle, I finally made it?  Please don’t take away the American and business incentive to achieve and make money.

If everyone would be forced to pay either a small flat tax or a point-of-purchase sales tax and no other anywhere, we would still bring in many trillions of dollars each year to pay our national bills and get out of our escalating debt.

Supporting and lifting up our freedoms and Judeo-Christian values

My biggest overhaul concern and hope for you as my President at the starting gate of your service will be to restore and protect our Judeo-Christian values, our freedoms and U.S. Constitution.  All your decisions — undoing of progressive and Obama assaults, responses to radical Islam, illegal aliens, fixing national security and many other priorities — must be submitted to the above.  We must not be forced to ever again submit to the ‘new world order’ UN or other international controls of our health, gun rights or speech.

Thank you, Candidate Trump, for believing and for running for President

It is high time we are all patriotic, wave the flag and stand up for America and her values again.  Pride in America and belief in our God is where it is at.  It is not about renewing the Nazis or brownshirts as the Obama and Hillary machine preach again and again.

To the left, good Americans are to shut up and have no faith except for a neutered and meaningless version they invent and push.  We are to have no national pride, no right or wrong and no exceptionalism in the world.   Just be Government-dependent widgets and do what you are told.  They can kiss my grits.

I know in my gut that most Americans are responding to you, Mr. Trump, in droves because finally someone who has influence and a ‘mouth’ is sharing pride in America again – Thank you from my heart.   For years, Americans have been attacked, assaulted, fired and destroyed simply because they are patriotic, love America, speech and freedoms.

How many schools have expelled or punished kids simply for wearing a flag on their shirt or writing stick-figure ‘good and bad guys’ on a piece of paper in 2nd or 3rd grade?  School administrators say over and over…”We can’t wear and push flags or prayer around a flag pole in front of a sporting event because of the feelings of illegal aliens, Islamic or atheist kids.”  What about the feelings of American and Christian kids?

America is in a rage over this kind of madness and our kids being forced to swallow the Government’s unpatriotic, sexually in-your-face, anti-Christian and pro-Islam – Common Core.  Mr. Trump, this curriculum is totally liberal and anti-American indoctrination. It must be reversed before our children en masse rise up as America-hating widgets now controlled by the New World Order.  Please help us with our kids and restoring education controls to the states.

Mr. Trump, we all know you swear sometimes (I wish you would watch that a bit more), and we know you aren’t perfect, but you do have real passion and love for freedom, capitalism and our country.  You also are brilliant and really can close all kinds of deals with all kinds of people with various agendas…Bravo. You do have rage that I believe reflects our rage, black, white, young, old, male and female.  You also have a growing and real faith in Christ.  I invite you to make that about a real relationship with Jesus and not just about going to church on Easter and Christmas and striking a pose like so many trying to get elected.  Don’t go there.  Be the man of God I know in my heart you want and need to be.  Listen up as you go forward and possibly lead the greatest country on earth.

I pray and believe you will resist the temptation to sell out to the power whores and controlling groups worldwide who will attempt to control you.

Get elected President, Mr. Trump; use your brilliance, experience and talents well.  Listen to God and the people, and do what you say you will do.  America is counting on you more than you may know.  I and many others will be praying for your success and safety as you roll.

I am done now and off to read 2 Corinthians.