WHICH HAS KILLED MORE PEOPLE?

(Feb. 8, 2016) — If we were to compile a list of history’s most prolific mass murderers, who would we put on our list?  Attila the Hun ravaged the Roman Empire during the 5th Century, killing and maiming all who stood in his way.  In the 13th century, Ghengis Khan and his Mongol hordes roamed far and wide, creating a bloody empire that stretched from China and the Korean peninsula all the way to Iraq and Eastern Europe.

From 1921 to 1959, Josef Stalin ruled the Soviet Union with a cruelty unprecedented in human history, killing some 60 million of his own countrymen.  In the 1930’s and 40’s, Adolph Hitler murdered some 6 million people – mostly Jews, Gypsies, and others who were deemed ineligible for membership in the “master race.”  And from 1975 to 1979, the Khmer Rouge, under the leadership of Pol Pot, murdered nearly 4 million in a wanton political “cleansing” of the Cambodian countryside.

But who would we select as the greatest mass murderer of all time?  The leading candidate for that title would be American marine biologist Rachel Carson, the author of Silent Spring, the principal force behind the banning of the pesticide DDT and the godmother of radical today’s radical environmentalists of the political left.

DDT is an odorless chemical pesticide used to control disease-carrying and crop-eating insects.  Developed in Germany in 1874, it did not come into common usage until World War II when it was effectively used for pre-invasion spraying of jungles and marshes.  Following the war, it was widely used throughout the world as a means of combating yellow fever, typhoid fever, malaria, and other diseases carried by insects.

Not only was DDT a major boon to the life expectancy of people throughout the world, it could be purchased for just pennies a pound.  In India alone, the number of cases of malaria was reduced from 75 million to less than 5 million in just ten years.

But then, in 1962, Rachel Carson published her book, Silent Spring, and environmental activism quickly became a leading fad among American liberals.  Carson charged that, as DDT entered the food chain, certain reproductive dysfunctions, such as thin eggshells in some species of birds, might occur.

In late 1971, the Environmental Protection Agency initiated a series of hearings on the potential dangers of DDT.  After seven months of exhaustive hearings, the EPA’s Administrative Law Judge, Edmund Sweeney, ruled that, “DDT is not a carcinogenic hazard to man… The uses of DDT under the regulations involved here do not have a deleterious effect on freshwater fish, estuarine organisms, wild birds, or other wildlife… The evidence in this proceeding supports the conclusion that there is a present need for the essential uses of DDT.”

Nevertheless, in spite of all of the scientific testimony to the contrary, pressure by radical environmentalists caused EPA Administrator William Ruckelshaus, a wealthy member of the Environmental Defense Fund, to reverse Judge Sweeney’s ruling, declaring that DDT was a “potential human carcinogen” and banning its use for virtually all applications.

Although reliable statistics are hard to find, it is estimated that, in the forty-five years since the banning of DDT, more than 9 billion cases of malaria have been reported, most of them in developing countries.  At the rate of 700,000 to 800,000 malaria-related deaths per year, more than 36 million people have lost their lives to malaria in the past forty-five years… 90% of them pregnant women and children under age 5.

By comparison, the Great Indian Ocean Tsunami of December 26, 2004, killed more than 227,900 people in 14 countries, and 125,000 more were seriously injured.  But the loss of life and the injuries due to drowning and the collapse of buildings may have been exceeded by those who would die as a result of starvation and the spread of disease, such as typhoid fever, dysentery, cholera, and malaria.

Typhoid fever, dysentery, and cholera can be treated with a combination of drugs and/or oral rehydration, but malaria is another matter.  Malaria is best controlled through the application of DDT in mosquito-infested areas.  But DDT is no longer an alternative.  Its use has been banned since the early ‘70s as a result of pressure by radical environmentalists in the United States and Europe.

But now, in the early months of 2016, epidemiologists are confronted with yet another incurable disease related to mosquito infestation.  According to a February 5, 2016 report by Investor’s Business Daily, “The Zika virus is spreading and some public health officials seem to be near panic.  Whatever happens, don’t blame the mosquitoes.  This is a man-made problem.”

The report goes on to say, “Maybe the Zika outbreak will fade without having become too widespread, the way the Ebola scare never lived up to the hype.  But for now, Zika is apparently on the move and government health officials believe it will spread throughout the Americas, except for Canada and Chile.”

A January 2016 report by the World Health Organization (WHO) tells us that, “Zika virus disease outbreaks were reported for the first time from the Pacific in 2007 and 2013 (Yap and French Polynesia, respectively), and in 2015 from the Americas (Brazil and Colombia) and Africa (Cape Verde).  In addition, more than 13 countries in the Americas have reported sporadic Zika virus infections indicating rapid geographic expansion of Zika virus.”

Although generally not fatal in either adults or infants, the normal symptoms of Zika virus infection include mild headaches, skin rash, fever, malaise, pinkeye, and joint pain.  With symptoms lasting only a few days in adults, Zika fever has been a relatively mild disease of limited scope, with only one in five persons developing symptoms and with no fatalities.  As of 2016[update], no vaccine or preventative drug is available.  However, the WHO recommends that symptoms can be treated with rest, fluids, and acetaminophen. 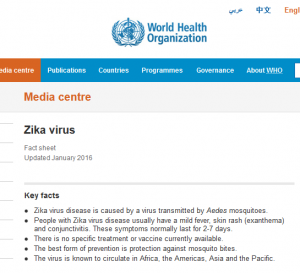 However, the WHO reports that, “During large outbreaks in French Polynesia and Brazil in 2013 and 2015, respectively, national health authorities reported potential neurological and auto-immune complications of Zika virus disease.  Recently, in Brazil, local health authorities have observed an increase in Zika virus infections in the general public as well as an increase in babies born with microcephaly in northeast Brazil.  Agencies investigating the Zika outbreaks are finding an increasing body of evidence about the link between Zika virus and microcephaly.”

Microcephaly is a birth defect in which a baby’s head is smaller than expected when compared to healthy babies of the same sex and age.  Babies with microcephaly often have smaller brains that might not have developed properly.

Zika virus is a member of the virus family Flaviviridae (genus Flavivirus), transmitted by the sting of the Aedes mosquito.  Under normal circumstances, since DDT poses no threat to humans or to the environment when properly used, the mosquito populations could be controlled through the use of DDT.  However, controlling the spread of deadly diseases through the use of DDT is not a part of the radical environmentalist agenda.  As Investor’s Business Daily correctly points out, “(T)he eco-activists would rather tolerate tens of millions of Third World deaths for the sake of a political agenda.  That’s the cruel and inhuman way of the environmentalist.  He will trade lives – and jobs, and economic liberty, and others’ wealth – in exchange for making the world… worse.”

So who wins the title of the greatest mass murderer of all time?  If we count all of the lives that would have been saved in the past forty-five years through the application of DDT, that number would exceed the total number of people murdered by Attila, Ghengis Khan, Stalin, Hitler, and Pol Pot, combined.

To allow all of those lives to be lost in the name of “environmental protection” and “animal rights,” using junk science as a basis, is not just inhumane, it is genocide on a grand scale.  The title of “Greatest Mass Murderer of all Time” goes to the late Rachel Carson and all of her radical environmentalist followers.