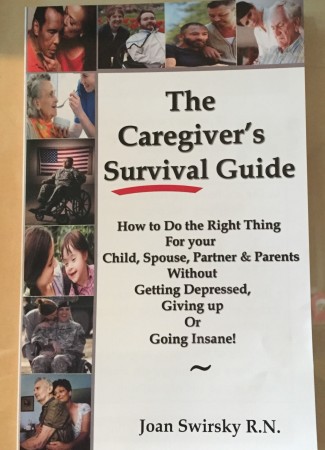 (Feb. 8, 2016) — Over the past 10 or so years, I’ve followed the writings of author Joan Swirsky. Although we’re separated by many miles, many States and have never met face to face, we’ve established an e-mail and telephone friendship.

A few months ago, Joan told me that she was completing her new book about a subject that is relevant to every human being on the planet.  I asked if she’d like me to interview her as soon as the book was published.  That day has, finally, arrived.  The book is out!  The interview below is Joan’s in-depth discussion on her book and a few other subjects that should be of interest to all.

Joan Swirsky is the the recipient of numerous Long Island Press Awards, has written health, science and feature articles for The New York Times Long Island section for over 20 years, as well as for many regional and national publications. A former obstetrical nurse, Lamaze teacher and psychotherapist, Joan is the book-and-lyric writer of four musicals, one of which, “Oh Baby!” – about three couples facing parenthood – was produced in New York City in 1983.

Joan is a clinical nurse specialist (R.N., M.S., C.S., C.E.) and NY-State-certified psychotherapist. She was awarded a Nurse of Distinction Award by the New York State Legislature in 1991, received the Master’s Faculty Leadership Award from Adelphi University, and is a member of Sigma Theta Tau Nursing Honor Society.

She was also the co-founder and Editor-in-Chief of REVOLUTION -The Journal of Nurse Empowerment from 1990 to 1995. The national quarterly magazine received First Prize for Editorial Excellence from the prestigious national media Folio Awards in 1994. In addition, for 15 years, she was the founding editor of The Caucus Current, a monthly magazine on conservative Jewish political issues.

For 15 years, Joan wrote a monthly column on pregnancy and childbirth for Newsday’s Parents & Children Magazine and for Long Island Parent. She was also a political writer for Newsmax.com and Newsmax Magazine. To this day, she writes for numerous conservative websites.

Joan and her husband Steve have three children and three grandchildren.

Sher: Joan, what is the title of your new book and what is it about?

Joan: The title, Sher, is The Caregiver’s Survival Guide – How to Do the Right Thing for your Child, Spouse, Partner & Parents Without Getting Depressed, Giving Up or Going Insane! In short, it is about taking care of the people we care about and love, which is a daunting job that few people are prepared or equipped for, but that millions of people are called upon to do, often while they’re in the middle of living their own busy and complicated lives.

Sher: I know that there are many books about this subject, but you mentioned that your book is unique to others of its type…how?

Joan: Before I wrote this book, I bought seven of the latest books about caregiving because I didn’t want to reinvent the wheel. All of those books were written (some quite brilliantly) before Obamacare radically changed American medicine, and by association, our legal system. All of a sudden, I realized, these books were irrelevant!

In addition, the books I read dealt primarily with the care of parents and/or spouses, and that’s it. My book deals with those subjects in depth, but I also deal with the following subjects:

-The care of children who are either born needing lifelong care, or require that care through illness or accident.

-The challenges of the LGBT community which, in spite of recent legislation mandating that gay marriage is legal in all 50 states, continues to face daunting legal hurdles.

-The complex and heartbreaking care of returning veterans from Iraq and Afghanistan, which number into the millions.

-An entire chapter on the legal issues that all caregivers and the ones they’re caring for need to know about as health declines and dependency sets in.

Sher: I know that people can read on your website (www.joanswirsky.com) information about your background, but nothing on your site tells the reader why you chose the Caregiving subject to write about. What was your attraction to this subject?

Joan: Good question. I married as a teenager and had my first child at 18, with two more to follow within five years. My last child and only daughter was born deaf and with neurological problems, and it took more than four years way back then to properly diagnose and treat her. Thankfully, it was not nerve deafness and surgery restored her hearing, but the early deficits left her with lifelong learning disabilities. When my children were all in school, I decided to start college––at the age of 28––and probably because of the care Karen required, I was attracted to nursing, which was the perfect choice since I loved every minute of clinical nursing in a local hospital, and, subsequently, of teaching Lamaze classes and becoming a nurse-psychotherapist. And in the more recent past, I oversaw the care of my mother during the last 10 years of her life, until she died at the age of 98. Being a caregiver kind of happened to me and, luckily, it turned out that I loved it.

Sher:  How did you gather material for this book?

Joan: Being the mother of a disabled child, working in a hospital, writing for years on health-and-science issues (including the “epidemic” of breast cancer on Long Island), meeting and treating untold numbers of people in my psychotherapy practice, and many others in the nursing home where my mother lived for over six years, not to omit the friends, colleagues, and acquaintances I’ve shared caregiving experiences with over a lifetime, I feel like I’ve accumulated a wealth of both hands-on and observational experience that equipped me to write about the challenges and heartaches and triumphs of caregiving. Throughout the book, there are many vignettes that are amalgams of the people and circumstances I’ve observed, which depict the “real life” sacrifices and hurdles and successes that caregivers experience.

Sher: Can you give me one or two examples?

Joan: There is the story of Lise, whose mother Hannelore, a native of Germany, had lived many years in Queens, NY, but when she became ill insisted that her three daughters take care of her at home, as she had taken care of her own mother in Europe. It is really a story of a clash of cultures, but the daughters managed to rise to the occasion, difficulties and obstacles notwithstanding. Then there is the story of “the good daughter” who did everything right but sacrificed her health and family harmony instead of reaching out for help in caring for her mother. Then there is the story of “the bad son,” a man of the cloth who realized when his mother got sick that his best instincts didn’t kick in because he simply couldn’t stand her. In these, and dozens of other real-life stories, I spell out coping strategies and philosophical thinking that helps ease the burden which is part and parcel of the caregiving role.

Sher: You’ve just mentioned three instances of people called upon to care for their mothers. But there are certainly other people you’ve cited in your book.

Joan: I didn’t even realize that, but yes, there are stories about the caregivers of disabled children, returning veterans, gay couples with unique challenges, and caregivers who find themselves stewing in anger or sinking into depression. In all cases, I discuss concrete and effective coping strategies.

Sher: From the eleven other books you’ve written, as well as your articles, I’m aware that it’s not only the “healing arts” that have absorbed your time and energies. You’re an oil painter, a calligrapher, the librettist and lyricist of four musicals, one of which was performed Off Broadway in 1983, and you were even a competitive ballroom dancer! Where did you fit in all this creativity?

Joan: Ha ha, Sher…you left out that I used to sew all my own clothes, and when my children were young, their clothes too! There are a lot of hours in the day. I didn’t do everything at one time, and when I decided to go to nursing school when I was 28––for my associate and then bachelor’s and then master’s degree, and even for a doctorate before I quit halfway through––I put some things on the shelf.

But through everything, I was always writing, starting with a poison-pen letter to my local newspaper when I was in my twenties. For me, writing has a life of its own, to the degree that it’s almost not a choice…you simply do it! I’m sure you “get” that better than anyone! And except for the years I worked in a hospital, everything else I’ve done was out of my home, where the clock and the calendar are all mine. It doesn’t hurt, of course, that I’m a late-night person. The wee hours are a great time to get things done.

Sher: Are there any other features of your Caregiving book that you’d like readers to know about?

Joan: Yes. There is an entire chapter on Caring for the Caregiver, which addresses the most overlooked aspect of the caregiving role. After all, if the person who is caring for you, and in many cases keeping you alive, isn’t taking care of herself––getting yearly mammograms, taking meaningful “time-outs” (meaning days off that involve genuine relaxation, fun activities, spiritual renewal, et al), and also receiving the kind of positive feedback that makes it all worth it––she will burn out and that will be the end of the good care she is giving  to the person she’s caring for, who may be her mother, father, sibling, spouse, or child.

There is also an extensive Resources section in which readers can learn of the many facilities and services and organizations that can make the caregiving journey significantly easier.

Sher: Where can people buy The Caregiver’s Survival Guide?

Joan: Right now, it’s on www.Amazon.com and www.BarnesandNoble.com. There is a Kindle edition, and it will soon be in bookstores. They can also call the publisher, Education Enterprises, at 1-800-331-6534 to get a discounted copy and immediate shipping.

Sher: Joan, thanks so much for your time and I wish you all the best with your new book!

Joan: Thank you, Sher. It’s such a privilege to be interviewed by you, one of the all-time great politically conservative writers, commentators, and patriots in America today!