BUT DOES HE OBSERVE ARTICLE II? 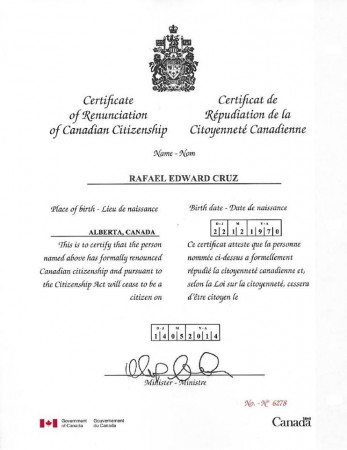 (Feb. 7, 2016) — On Sunday morning’s “Fox & Friends” at 7:06 a.m. EST, co-anchor Tucker Carlson, who is also founder and editor-in-chief of The Daily Caller, described presidential candidate Ted Cruz “a constitutionalist,” among other things such as “an attorney” and “scholar.”

Cruz, a declared 2016 presidential candidate, is known for opposing the Washington “establishment” and policy items such as Obamacare and the Common Core educational standards ushered in during the Obama regime.

However, Cruz’s constitutional eligibility to seek the presidency has been questioned by many, given his birth in Canada to a Cuban-citizen father and U.S.-citizen mother.  Article II, Section 1, clause 5 of the U.S. Constitution requires the president and commander-in-chief to be a “natural born Citizen.”  Cruz says he meets the definition, despite his foreign birth, resulting from his mother’s U.S. citizenship.

Last week, The Post & Email obtained a certified copy of Eleanor Darragh Cruz’s birth certificate indicating that she was born in Wilmington, DE on November 23, 1934.

Cruz has shown no evidence that he was registered as a U.S. citizen at birth, but he presented his Canadian birth certificate to The Dallas Morning News in August 2013, which then reported that he was born a dual citizen.

At the time, Cruz’s office said it had no knowledge of his Canadian citizenship.

On January 8, CNN reported that a Princeton acquaintance and fellow debate-team member of Cruz’s remembered Cruz having spoken of his dual citizenship in the context of whether or not he was eligible to run for U.S. president.  “I do recall specifically Ted once commenting that when he was a kid and he first learned about the natural-born citizen clause in the Constitution, like I suspect every other American child born abroad, he inquired whether or not he was eligible to be President. And he was quite pleased to discover that yes, indeed, that as a citizen born aboard [sic] he was eligible to run for the president,” CNN quoted Canadian native Michael Lubetsky as having said.

In 2008, Barack Hussein Obama reported having been born a dual citizen of Kenya and the U.S., although in 1961, when Obama was allegedly born, Kenya was still a British colony.  The media failed to question whether or not Obama was impeded from serving as president given that revelation, nor was his background probed during the his 2012 re-election campaign.  Many believe that Obama is ineligible because of his claimed foreign-citizen father, which would have been compounded if he were found to have been born in a foreign country.

Obama claimed presidential eligibility by his claimed birth in Hawaii to a U.S.-citizen mother.  However, the “long-form” birth certificate released by the White House in April 2011 containing those details has been declared a “computer-generated forgery” by a criminal investigation team, the Maricopa County Cold Case Posse, which works under the direction of Maricopa County Sheriff Joseph M. Arpaio.

In 2005, the subjects of “birthright citizenship” and “dual citizenship” were discussed by two U.S. House committees:  the Subcommittee on Immigration, Border Security, and Claims; and the Committee on the Judiciary in the context of “the effect that they have on our sovereignty as a Nation.”  One of those testifying, Hudson Institute Senior Fellow Dr. John Fonte, opined that “Dual allegiance violates a core American principle of equality of citizenship. Dual citizens are specially privileged, supra citizens who have voting power in more than one nation and special privileges like EU privileges that the majority of their fellow American citizens do not have.”

Two weeks ago, JB Williams of the North American Law Center (NALC) reported that an individual who had interviewed Cruz when he was running for the U.S. Senate in 2012 had provided the organization with a sworn affidavit stating that Cruz had described “natural born Citizen” as a person born in the United States to citizen parents.  Williams said the affidavit would be released at an unidentified time.

In May 2014, Cruz renounced his Canadian citizenship after saying he “should only be an American.”

On Thursday while campaigning in New Hampshire, Cruz refused to answer a question from a 17-year-old newly-registered voter who asked how he claimed not to have known about his Canadian citizenship from birth.  Instead, Cruz insisted on justifying his eligibility to seek the presidency. “I’ll answer your question, but I’m not going to debate you,” Cruz said, finally dismissing the query and moving on to the next questioner.

One Response to "Tucker Carlson Calls Cruz “a Constitutionalist”"