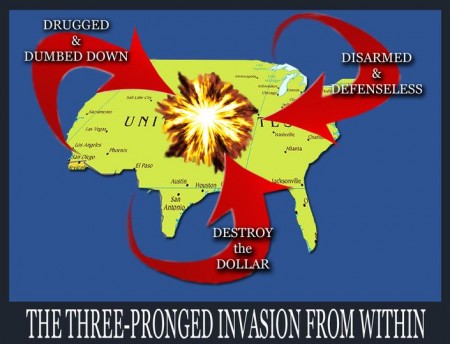 (Feb. 4, 2016) — We have been saying from the moment Obama made his hatred for this country evident, that there could only be two reasons that any American, regardless of political party, could support him.  One evident reason would be lack of paying attention.  The other, akin to the Usurper, abhorrence for America.

It had been difficult for patriots to believe, up until just these last few years, there were more than just a few nutcases who despised this great country.  Those few who, in the past, reared their malfunctioning brains, quite honestly never seemed important enough to matter or for real Americans to be concerned with them.

While that naiveté was walking us through life, working, supporting and raising our families, we were buffered from the evil which was festering in a cauldron of political correctness and socialism, while nurturing the sins of envy and selfishness.  The infection was being injected into school curriculums and every aspect of our children’s lives.

Many children survived this contagion as a result of values being consistently practiced and taught at home, but a majority of them clearly have not and there appears to be no antidote, no cure and no reversal of their malfunctioned thought processes.

These last three half-generations have grown up in a world of forced and untested vaccines, brains and bodies immersed in pharmaceuticals, God removed from their moral compasses, drug use not only legalized but encouraged, laziness rewarded and the vacuous promise of social equality bequeathed on one and all.   The obliteration of common sense and morality is just about complete.

Could there ever have been contrived a more effective plan to wipe out the best and most powerful land of freedom and economic supremacy than what we are now seeing? There are a few holdouts who have not had their brains turned into swamp sludge who will fight this coming catastrophe, but there will be not enough of them to withstand the onslaught of the emerging New World Government.

While the second pincer, delegated to the task of and with the aid of the newly brainwashed masses, clearing a safe path for the new elites by the disarming of all the citizens, the third branch of this insurgency was well under way.  That is the total collapse of America’s economy which will cascade across the planet.

The plan here is to use created and borrowed money as the ammunition to finance the operation which will ultimately demolish capitalism as well as liberty.   This malevolent endeavor has provided America’s internal enemies with limitless resources. That is, the more debt they create, the more “ammunition” they have to pay for the propaganda they need and at the same time, the closer this country moves towards the avalanche of collapsing economies.

The bigger the debt, the weaker the capitalist structure.  This structure needs to be buckled if America is to be devoured by this new world order.  This explains why they have spent years destroying morality and fogging the brains of the next generations. The dumb and the disarmed put up very little resistance.

So how does creating debt that can never be repaid help this diabolical plan?  The goal is, and you had better believe it, the default of the US Government. To create such debt that it overwhelms any ability to ever repay it.  A debt default would destroy the last remaining obstacles, the middle class and foreign investors.   World governments which hold notes from the US Treasury will not be paid and many will, as a result, suffer their own economic collapse.  The result will be a financial global reset controlled and directed by the New World Order.

How close to fruition is this scenario?  Much closer than anyone could imagine who does not understand the extent and the depth to which the US has become indebted.  To understand this, one needs to comprehend the magnitude of the number “trillion.”

To enlighten the remaining few who may still not be able to conceive of the enormousness of our National Debt, TPATH has done some research, math and created some mentally visual comparisons.  These next few facts we will present are so astounding many will fail to believe them.

It is really quite a testament to the American people that as of this date, the financial system has not already collapsed under its own weight.   But the black hole of annihilation cannot be far off.

Here are some statements which will give you some insight as to the massiveness of this number.

If the US government was to declare an end to deficits and an end to additional debt, and not considering or adding to the existing debt with interest owed, and they passed a law that would reduce the $19 Trillion debt by the amount of $1,000,000 each day (that’s one million dollars), how many years would it take to pay it off?

If that same amount was applied with the accrued interest, how long would it take?

ANSWER: Never, as in forever.

If you line up, end to end, $100 bills and started the route of money on the shoreline of New Jersey and extended it in a westerly direction until it valued $19 Trillion, where would that line end?

ANSWER: Back on the New Jersey shoreline after making 3,070 round trips.

Mount Everest is the highest mountain in the world with an elevation of 29,029 feet from sea level to its peak. If you were to stack $100 bills at the base of Mount Everest, how high would it rise when the stack equaled $19 Trillion?

ANSWER: Yes! In fact it would get there and back (round trip) 409 times.

You have now been given a visualization of where this country stands relating to the “ammunition” which has been expended in the three-pronged attack.  And not just on America, but the entire world.  Yes, Obama is truly evil, my friends, but he is just the latest “fool-tool” who believes he is in charge.

He is not and neither are we.

Research and calculations are available here, for those who might want to check these statements out.   HERE