“THE GREATEST ENEMY OF THE STATE”

(Jan. 31, 2016) — Really?  Seriously?  We now know that, out of the thousands and thousands of e-mails that Hillary (“I-am-not-a-crook”) Clinton says were kept on her personal, unsecured, “y’all-come-hackers” computer server – and which she tried, through incompetent surrogates, to erase, destroy or delete – are hundreds of ones which she knew or should have known were “confidential,” “secret,” “top secret” or, chillingly, “SAP.”

By way of preliminary footnote as to Clinton, the term “SAP” does not refer to her foolish gullibility, which would, in any event, constitute a misplaced compliment.  Pathological liars are rarely if ever properly described as “saps.”  Cunning, deceitful and treacherous, yes… but not “saps.”  Instead, the acronym refers to “special access programs” or information and intelligence regarding Pentagon and/or Central Intelligence Agency (or presumably other “black ops” entities) requiring authorization even more secret and selective than “top secret.”  In terms of national security, SAP information is treated as “really, really, I am not kidding secret.”

The continuing failure of the mainstream media – let alone the Justice Department – to indict Clinton in ink on their editorial pages upon just the facts now known merely underscores the mendacious, turbocharged hypocrisy of what once was an honorable “Fourth Estate.”  If only one-tenth of the defalcations now seen to have been committed by Clinton instead had been committed by a GOP Secretary of State under a GOP president, the media reaction would have dwarfed the Mt. St. Helens event, but without the charm.

Pravda on the Hudson, aka The New York Times, produced yet another example of its canary yellow editorial board hypocrisy last Saturday by endorsing Clinton to be the Democratic nominee for the presidency, prevaricating by calling her “one of the most deeply qualified presidential candidates in modern history.”  To the NYT, the term “deeply qualified” is apparently synonymous with Benedict Arnold’s “deep qualifications” as an American patriot.  Still, one could argue that it depends on what your definition of “qualifications”… is.

Less than 24 hours earlier, the Gray Trollop also reported that the State Department would now be refusing to disclose at all  or to anyone twenty-two (22) e-mails found on Clinton’s computer server which are apparently even above SAP classification.  According to the State Department, these e-mails contain information so damaging to national security that they cannot be released at all.  Ever.  Disingenuously, the Clinton machine claimed that the flap was based on “over-classification run amok” and demanded that all of the e-mails be released… knowing that the only person who might conceivably override the State Department refusal resides at: 1600 Pennsylvania Avenue.  And on a scale of one to ten, the likelihood of that happening before November 8, 2016 or January 17, 2017 is approximately: negative seventeen.

But wait… there’s more.  In addition to withholding the 22 “super duper” radioactive e-mails from disclosure, the State Department announced that it also would be refusing to disclose an additional eighteen (18) e-mails that the Usurper-in-Chief had sent to Clinton.  Specifically, it was announced that 18 e-mails exchanged between Mrs. Clinton and President Obama would also be withheld, citing as “justification” the purported “longstanding practice of preserving presidential communications for future release.”  John Kirby, the State Department flak tasked with delivering the news, said that the e-mail exchanges between Clinton and the Usurper did not involve “classified information.” 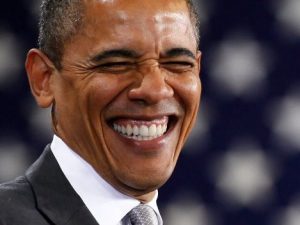 In Beltway Doublespeak, this roughly translates to: “Even though the e-mails purportedly did not contain classified information – thereby seeming to rule out the potential for any national security concerns – since they might contain disclosures which either the Usurper or Clinton would prefer remain secret and ‘just between to two of us,’ no one will be allowed to see them.” The only thing missing was “so there” and “let them eat cake.”

Correct me, but is this not close to what Nixon claimed with respect to his “issues” before the threat of impeachment caused him to resign?  Remember (or for those readers too young to remember) the famous “Rose Mary Woods 18½-minute gap?” What on earth could possibly be so problematic…, so embarrassing… or even so… criminal… in those e-mails?  Rest assured, you will not see questions like that posed, even rhetorically, by the editorial board of The New York Times, the Washington (“Watergate”) Post or, for that matter, any other mainstream regime propaganda outlet.

Could the e-mails implicate details relating to the deadly “Fast and Furious” federal gunrunning debacle?  Could they contain confirmation relating to the “stand-down” order on September 11, 2012 in Benghazi?  Or might they contain really incriminating evidence regarding the continuing rumor that the Benghazi attack was, in fact, a kidnapping plot concocted to ensure the Usurper’s re-election in 2012, but which went bad when some American patriots refused to stand down, as discussed here and  here?

Indeed, we now know from a recently released September 11, 2012 e-mail from Defense Department Chief of Staff Jeremy Bash that special operations military forces were “on the way” to Benghazi, but were intercepted – by the United States government, not by any foreign military – and instructed to not proceed with any further rescue efforts.  If this e-mail does not corroborate the “botched kidnapping” possibility, nothing does… except perhaps the cell-phone video/audio of one of the Benghazi attackers approaching the feckless Libyan guards (yes, hired by Hillary Clinton’s State Department operatives) and yelling, in Egyptian dialect Arabic, “Don’t shoot… Dr. Morsi sent us!”  Mohamed Morsi, of course, was the Egyptian president seeking the release of the Blind Sheik.

All of the foregoing aside, you folks in Iowa… and New Hampshire … and South Carolina… and everywhere, the Gray Trollop recommends that you vote for Clinton, because she is “one of the most deeply qualified presidential candidates in modern history.”  Which brings to mind the quote from Adolph Hitler’s Minister of Propaganda, Josef Goebbels: “If you tell a lie big enough and keep repeating it, people will eventually come to believe it. The lie can be maintained only for such time as the State can shield the people from the political, economic and/or military consequences of the lie. It thus becomes vitally important for the State to use all of its powers to repress dissent, for the truth is the mortal enemy of the lie, and thus by extension, the truth is the greatest enemy of the State.”

Of SAPs, Candidates and the Truth added on Sunday, January 31, 2016