WOULD THE SUPREME COURT “TAKE THE COWARDLY WAY OUT” THIS TIME?

by Don Fredrick, ©2016, author of The Obama Timeline 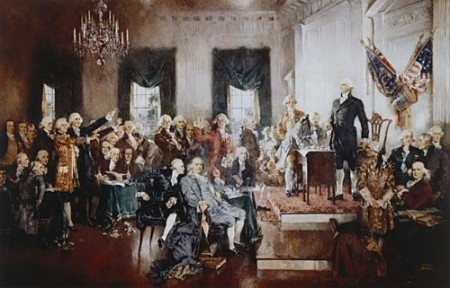 An earlier draft of the Constitution required only that the president be a “born citizen,” without regard to the citizenship of the parents. John Jay (who later became the nation’s first Chief Justice of the Supreme Court) wrote George Washington and asked that the rule be strengthened so that individuals with “divided loyalties” could not serve as president. The drafters agreed, and the “born citizen” requirement was changed to a “natural born citizen” requirement. But changing the wording to “natural born citizen” also meant that no one could legally serve as president until July 4, 1811—when children born on July 4, 1776 turned 35 and met the presidential age requirement.

Those who argue that the term natural born citizen can mean born on foreign soil to only one citizen parent or born on U.S. soil to non-citizen parents need to explain why the grandfather clause was included in the presidential eligibility requirement. Why was that clause needed? Why is the requirement not as simple as:

“No Person except a natural born Citizen, shall be eligible to the Office of President; neither shall any Person be eligible to that Office who shall not have attained to the Age of thirty five Years, and been fourteen Years a Resident within the United States.”

The grandfather clause is in the eligibility requirement for a reason. Those who argue that Obama (born in Kenya or Hawaii to a British-citizen father), Ted Cruz (born in Canada to a Cuban citizen father), Marco Rubio (born to two Cuban-citizen parents), Bobby Jindal (born to Indian-citizen parents), Rick Santorum (born to an Italian-citizen father), and Nikki Haley (born to Indian-citizen parents) can legally serve as president (or vice president) should be made to explain the purpose of the grandfather clause. They will not be able to do so. That is why the Obama eligibility challenge, Kerchner v. Obama, was refused by the Supreme Court. The Justices would have had to rule against Obama—because they understand the purpose of the grandfather clause. Fearing race riots, the Justices took the cowardly way out and refused to hear the case.

Those who argue that only one parent needs to be a U.S. citizen should be reminded that (fair or not) it has been the case historically that the father’s citizenship is passed on to the child. In addition, many pundits have referred to the text of laws and regulations that only use the term “citizen,” and do not even mention the term “natural born citizen.” If a law uses the term “citizen” but never uses the term “natural born citizen,” one cannot infer that the law pertains to both. One would flunk out of law school with such shoddy reasoning. (A law that refers to motorcycles, for example, does not also apply to truck and cars—even though all are vehicles.) Even worse, some of Obama’s attorneys have shamelessly omitted the words “of parents” when quoting legal texts and historical documents, in their attempts to argue on his behalf.

In 2008 the political pundits and the so-called “experts” declared that Obama was eligible to serve as president despite having been born a British subject. (In 1961 what is now known as Kenya was still a British Protectorate. Obama was therefore born a British subject—regardless of the place of his birth.) In addition, Obama’s supporters insisted he was not born in Kenya, because they knew most Americans would insist he could not serve then as president if he was foreign-born. In 2016 the “experts” now suddenly declare the opposite—that birth in Kenya would not have rendered Obama ineligible—because they also want to break the rules for Cruz, Rubio, Jindal, Santorum, and Haley. But, unlike Obama, Cruz made the mistake of admitting (albeit reluctantly) that he was born in Canada; he had not bothered to create a fake birth certificate “proving” he was born in the United States and had not spent years developing a phony life story. As a result, the natural born citizen issue is back in the news. The Supreme Court will likely again lack the courage to rule on the question of the meaning of the term—because if it rules against Cruz it will necessarily also be ruling against Obama.

Of course, there is another possible scenario: The Democrats and media leftists push the issue, charge that Cruz, Rubio, et al. are ineligible, and file one or more lawsuits. (Congressman Alan Grayson (D-FL) has already stated that he will do so.) After it is too late for the Republicans to change their presidential and vice presidential nominees, the issue will make its way to the Supreme Court—which will necessarily rule the GOP candidate(s) ineligible. But wouldn’t that also render Obama’s entire eight-year reign illegitimate? No, not if Obama were to conveniently announce, “I just learned from DNA tests that my real father was Frank Marshall Davis—so I most certainly did have two U.S. citizen parents.” Checkmate. Obama’s far-left “legacy” is undisturbed; Hillary Clinton gains the White House; and the GOP’s rising stars join Bob Dole, John McCain, and Mitt Romney on the loser list.

Don’t say I didn’t warn you…

One Response to "How Hillary Could Win"