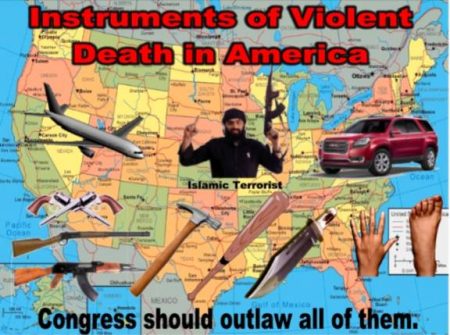 (Jan. 10, 2016) — Every time a gun is used in an accidental shooting, a crime, a murder, or terrorist attack in the United States, whether it be a handgun, rifle, AK-47, M-15, or machine pistol, the Democrats and especially President Obama immediately call for more gun control, magazine limits, or outright confiscation of guns from lawful Americans, in spite of an all-powerful constitutional amendment and U.S. Supreme Court decisions that give authority to all legal citizens to own firearms. Each single event becomes a news story that runs for days, if not weeks or months. The liberal news media gleefully promotes and champions the Democrats’ plea. It makes no difference to the Democrats that most of the crimes, lone wolf or terrorist attacks, would not have been stopped by more gun control.

Humans, by their very nature, tend to be violent in certain circumstances. So let’s put gun violence in perspective with other forms of human violence.

Just recently, a homeless black woman in her twenties, with an infant in the back seat of her car, took to the sidewalk in Las Vegas and killed one person and seriously injured over 30 other people. Apparently, she did it on purpose. So she used her car as a weapon to kill.

Not too long before the Las Vegas incident, there was another similar case at a University of Oklahoma Homecoming parade where a woman purposely drove her car into the crowds of people watching the parade. Four people were killed, including an infant, and at least 33 people were injured, some quite seriously.

Then there is the case of the drunk teenager who wiped out – no, killed – four people, and the corrupt court came up with a new legal term, “affluenza,” to get rich people off from heinous crimes. How many people are killed by cars operated by drunk drivers? According to the CDC, 10,076 people were killed in 2014 by alcohol-impaired drivers. Alcohol-related deaths with cars account for almost one-third of all traffic deaths. God knows how many are killed by the now-legalized marijuana in four states.

These are just recent cases that rapidly disappeared from the news cycle. There are many more we could relate where a car is accidentally or purposely used to kill people.

Terrorists have not only used airplanes to kill people in America and other parts of the world, but they have also used cars, knives and explosives. Just ask an Israeli.

In the United States, cars are heavily regulated in their manufacture and operation and people require licenses to drive them. Road signage and traffic controls are everywhere. Nevertheless, it is abundantly clear that cars are deadly weapons and kill people. From the Democrats’ rationale, there should be more car control and maybe there should even be a new law to confiscate cars from dangerous people, or maybe cars should be taken away from everyone because they are so deadly. But alas, the Democrats are and have been silent on the issue of deaths by car. Only deaths by guns activate their adrenaline.

According to the FBI for homicides in 2011, 8,583 people died by firearms. In 2013, 32,719 people died from car crashes and over 2,000,000 were injured. In that same year of 2013, 1,694 people died by knife stab wounds and 496 people died by blunt objects like baseball bats and hammers. 728 people died by the use of hands and feet. If deaths or injuries were the rationale to pass laws, it is obvious that government should pass laws outlawing guns, cars, baseball bats, knives, hands, feet and even swimming pools.

But there is a much larger issue here that transcends outlawing knives, guns and cars. From the observations of this author and many others who use their intellect instead of their emotions, it is clear that Democrats are the party of excessive controls, regulation and “TAKE AWAYS.” Democrats want to take away our guns. They want to take away our money for welfare, social justice, environmental protection, legal and illegal immigration and climate change to control us, regulate us and buy votes. But they don’t want to spend any money on maintaining a strong military. There are so few votes in the military industrial complex.

Democrats now control or excessively regulate our land, our food, our water, our money, our energy, our cars, our guns, our businesses, our schools, our health care and every other aspect of our lives. Except for a few instances in the last 100 years, Democrats have unilaterally controlled the American political process, along with the help of the unions, public schools, academia and the news media. Democrats have taken over America like the Communist Party tried to take over the movie industry in the mid 1940’s. But the Democrats managed to take over the movie industry instead. One man’s Democrat is another man’s Communist or Socialist. The movie industry is a powerful tool for propaganda, mind control and political money for Democrats and have been used extensively for such Democrat purposes.

Apparently, Democrats don’t think that Americans are smart enough to take care of themselves, and yet the Democrats have shown us that they aren’t even capable of managing anything they touch, including domestic and foreign policy. Under Democrat control, states and cities have or are going broke. Under Democrats, the national debt has risen exponentially to the point that it may be virtually impossible to ever pay back. Under Democrats, the economy is barely functioning, with tepid growth at best due to Democrat-sponsored massive regulations.

Under this Democrat President, the national debt has almost doubled since he took office seven years ago. Think about it. Obama, a Democrat, has doubled the national debt in seven years that it took over 200 years to build. Under Democrats and especially this Obama Democrat President, our position in the world has dropped precipitously. Our enemies don’t fear us and our friends don’t trust us.

Of course, the only reason that people would vote for a Democrat is because Democrats TAKE AWAY money from everyone else, money Democrats have no right to, and unconstitutionally hand it over to those who vote for Democrats. Those voters are now in the majority and by keeping the Democrats in power, they allow Democrats to control us, regulate us and TAKE AWAY our money and other things from us, you know, like our freedom. The hard truth is, Democrats want you to pay for their compassion so that Democrats can buy votes to stay in power.

The single answer to this Democrat-Republican control dilemma can only come from the people themselves and the people show no signs of wanting to change anything. Except for a few million of us, most of the people like it just the way it is with their hands deep in the public till. One day they will be forced to pay a horrendous price and that price might very well come in the form of mass starvation, slavery, or may be even conquered by a foreign power. The Biblical phrase that says the meek shall inherit the earth is a myth. The meek are nothing but collateral, slaves and conscripts for the powerful and always have been. Only the courageous and the strong, in mind, spirit and body, will prevail in the long run. The strong always carry the weak on their backs, either out of compassion, or out of necessity.

Outlawing knives, baseball bats and cars, as we suggested in the title of this article, will not change anything, whether the Democrats do it, or the Republicans do it. Nor will more gun controls change anything. Americans will still be heavily regulated and controlled by an Absolute Democrat Monarchy and American sovereignty and freedom are, have been and will continue to be the losers.

Tell us what you think at comment@narlo.org.

Ron Ewart, a nationally known author and speaker on freedom and property rights issues and author of this weekly column, “In Defense of Rural America”, is the president of the National Association of Rural Landowners (NARLO) (http://www.narlo.org/), a non-profit corporation headquartered in Washington State, an advocate and consultant for urban and rural landowners. He can be reached for comment at mailto:info@narlo.org.

We Must Outlaw Knives, Baseball Bats and Cars! added on Sunday, January 10, 2016