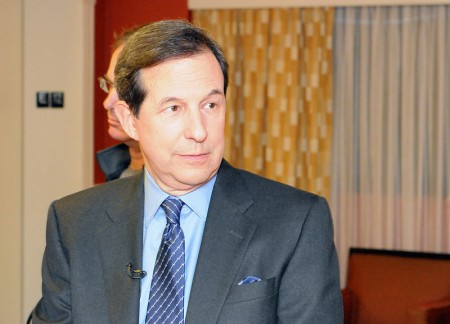 (Jan. 10, 2016) — In an interview conducted at approximately 8:18 AM ET on Fox & Friends with fellow Fox News anchor Chris Wallace, Wallace told F&F co-anchor Tucker Carlson that he “loves the way Donald Trump is handling this,” referring to Trump’s renewed questioning of Sen. Ted Cruz’s constitutional eligibility to serve as president of the United States given Cruz’s birth in Canada.

Journalists are generally not expected to render an opinion on the statements of political candidates. When Carlson asked Wallace if he believes that Trump is raising the Cruz eligibility issue because polls show that Cruz is leading Trump in Iowa, where the first caucuses of the presidential election cycle begin on February 1, Wallace responded, “Sure.”

Wallace noted that “over the weekend,” Cruz released his mother’s birth certificate which appears to indicate that Eleanor Darragh Wilson Cruz was born in Delaware in 1935, presumably rendering her a U.S. citizen.  Wallace did not cite the source of the document, Breitbart News, but suggested that Cruz released it because of the pressure Trump is exerting on him to prove his eligibility.

Cruz’s father was a Cuban citizen who assumed Canadian citizenship while living in Alberta, where his son was born; in 2005 the elder Cruz became a U.S. citizen, according to an interview conducted with NPR in 2013.  Sen. Cruz was born on December 22, 1970 in Calgary and as late as 2013, insisted he did not possess Canadian citizenship, which was inaccurate.

Cruz renounced his Canadian citizenship in May 2014, but Texas voters were unaware that he was considered a citizen of Canada when he ran for the U.S. Senate in 2012.

In 2011, as Trump deliberated a run for the presidency the following year, he challenged Barack Hussein Obama to release his detailed, “long-form” birth certificate, which eventually occurred on April 27 of that year on the White House website.

An astute citizen suggested to the RNC in November 2014 that its leadership scrutinize the presidential qualifications of each candidate to avoid the situation which has arisen with Cruz wherein an eligibility lawsuit has been threatened by a Democrat.  Alan Grayson, a Florida congressman currently running for the U.S. Senate seat being vacated by Sen. Marco Rubio, another presidential candidate whose eligibility has been questioned, told Alan Colmes on November 25 that he would file such a challenge should Cruz become the nominee.

Last week, Grayson told U.S. News & World Report that he was unsure if Cruz’s mother had ever been a U.S. citizen or if she relinquished her US citizenship while residing in Canada during the late 1960s and early 1970s, where she and her husband reportedly owned a business in the oil industry.  Cruz is claiming “natural born Citizen” status, as is required by Article II, Section 1, clause 5 of the U.S. Constitution for the presidency only, through his mother’s purported U.S. citizenship.

While the media has not yet cited the historical reason for the inclusion of the clause, it emanated from a letter which the first U.S. Supreme Court Chief Justice, Founding Father John Jay, wrote to Constitutional Convention president George Washington on the importance of precluding anyone with foreign influence from the office of the nation’s chief executive, who was then also described as the “Command in chief of the american army.”

Historical documentation shows that the citizenship of the parents was at least equal to, if not more important than, the birthplace of the child in determining citizenship, a fact also not discussed by major media.  When foreign diplomats are stationed in the United States on their country’s business, any child who might be born to them while so situated is not considered a U.S. citizen.

During the 2008 and 2012 presidential election cycles, questions over Barack Hussein Obama’s constitutional eligibility were not allowed on the public airwaves for as-yet unknown reasons. A criminal investigation into Obama’s long-form birth certificate and Selective Service registration form released to various FOIA requesters since early 2009 has declared the purported documents “computer-generated forgeries.” The same investigation revealed that a number of journalists have provided sworn affidavits stating that they were threatened and intimidated after showing interest in investigating Obama’s life narrative.

The media has also failed to report on the findings of fraud and forgery of Obama’s only publicly-available documentation.

Wallace is host of “Fox News Sunday,” which airs several times on Sunday, the first of which is at 9:00 or 10:00 a.m. on the East Coast, depending on the area.  Wallace will be interviewing Trump this morning on Cruz’s eligibility, issues pertaining to the 2016 presidential campaign and those facing the country at present.

Wallace told Carlson that he was not attempting to “help” Trump, but rather, to “help” Cruz to resolve the questions about his constitutional eligibility by discussing it on his show.  Wallace also said that “the Supreme Court has never ruled on” the eligibility of a candidate with Cruz’s background.

A second astute reader of The Post & Email has pointed out that the purported birth certificate of Eleanor Cruz does not appear to contain a raised seal or to reveal its source.

Since as early at 1991, Obama was reported to have been born in Kenya.  In December 2007, Chris Matthews said Obama was “born in Indonesia,” as did The Honolulu Advertiser’s Will Hoover in 2006.  The latter article, however, was later altered to say that Obama was “born in Hawaii,” with Hoover claiming to have performed only a cursory internet search to first determine Obama’s birthplace.