“THERE CAN BE NO DOUBT…” 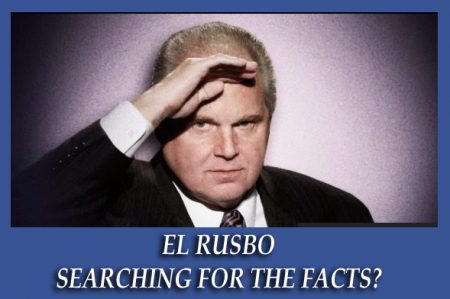 (Jan. 9, 2016) — This past week, as much in support of his buddy Mark Levin as for Ted Cruz, Rush Limbaugh spent a very long time telling his audience that they knew not what they knew.  He spoke of every aspect of the Natural-Born Citizen issue.  That is, except for the facts, the history and the intent of the founders when they prepared Article II of the Constitution.  Intentional circumvention?  You decide.

I need to preface this article by saying I am a huge Limbaugh fan. I have been faithfully listening to him for his entire time on New York radio.  He has never belittled callers who disagree with him as is the standard operating procedure of his good buddy, Mark Levin.  But…..

Rush remarked about how he had endeavored to investigate and read all he could find on the subject and was astounded that there were documents comprised of 75,000 words or more.  It is quite apparent that he did not read the right articles or information which would have better informed him in far, far fewer words.  Note to Rush:  to save time, one should not read the entire Webster Dictionary for the definition of a single word.

Before I go into the factual aspects of the NBC controversy it is important to state that my concern about Cruz lies simply in my Constitutionalism.  I rather like Cruz and think he would be an outstanding President.  My concern also lies in the fact that if he is the Republican Party nominee, he will lose many principled conservative voters and hence the election.  We need all of our Party on board to defeat the Democrats.  Cruz’s NBC problems will not go away.  They may in fact be the cause of four more years of Socialist rule.

Let’s begin….
It is imperative that all who may read this or pass it on for others to read know that there has been a concerted effort to obscure, misinterpret and, let’s be honest, lie about Article II, its intentions, its meaning and US Supreme Court rulings.  This article will address them.

Falsehoods, lies, obfuscations and other deceptions:

FIRST
There has never been a United States Supreme Court interpretation of description of what a Natural Born Citizen is.
Wrong!

The binding Supreme Court precedent Minor vs. Happersett (1875) defined a natural born citizen as a US citizen born to two US citizen parents at the time of birth.

“The Constitution does not in words say who shall be natural-born citizens. Resort must be had elsewhere to ascertain that. At common law, with the nomenclature of which the framers of the Constitution were familiar, it was never doubted that all children born in a country of parents who were its citizens became themselves, upon their birth, citizens also. These were natives or natural-born citizens, as distinguished from aliens or foreigners. Some authorities go further and include as citizens children born within the jurisdiction without reference to the citizenship of their parents.”

SECOND
The above ruling agrees that no definition of the term Natural-Born Citizen is written in the Constitution.  Therefore it is open to various interpretations.
Wrong!

The Constitution was not written with descriptions and word usages.  It was written in the terms and values of their day.  The ruling “Resort must be had elsewhere to ascertain that” does not allow for the use of whatever interpretation suits the day, but clearly directs attention to the intentions of the Founders.

THIRD
The founders used “British Common Law” as a basis for the structure of legal documents.
Wrong!

A long and bloody Revolution was just fought in order to separate America from the rules and laws of the British Empire.  There was no desire to use them or their system to forge a new society.  Instead, on many occasions, in several communications the founders referenced the work of Vattel.

The term “natural born citizen” was well-known during the time of the writing of the Constitution from Vattel’s “Law of Nations” (1758), which stated “natural-born citizens are those born in a country of citizen parents” (Volume 1, Chapter 19, Section 212).

“The citizens are the members of the civil society; bound to this society by certain duties, and subject to its authority, they equally participate in its advantages. The natives, or natural-born citizens, are those born in the country, of parents who are citizens. As the society cannot exist and perpetuate itself otherwise than by the children of the citizens, those children naturally follow the condition of their fathers, and succeed to all their rights. The society is supposed to desire this, in consequence of what it owes to its own preservation; and it is presumed, as matter of course, that each citizen, on entering into society, reserves to his children the right of becoming members of it. The country of the fathers is therefore that of the children; and these become true citizens merely by their tacit consent. We shall soon see whether, on their coming to the years of discretion, they may renounce their right, and what they owe to the society in which they were born. I say, that, in order to be of the country, it is necessary that a person be born of a father who is a citizen; for, if he is born there of a foreigner, it will be only the place of his birth, and not his country.”

FOURTH
The use of the term “Natural-Born Citizen,” as included in Article II, was arbitrary and not meant to define a President’s eligibility beyond that of being a “citizen.”
Wrong!

Following the first few drafts of Article II, as it was still being circulated and debated among the several Founders, John Jay, the future and first US Supreme Court Chief Justice, was concerned that liberty could be compromised if presidents to come had affiliations and influences from other countries.  He therefore suggested to George Washington that the eligibility standard be raised to the highest level of security as possible.  Here is an excerpt of that letter.

To George Washington,
“Permit me to hint, whether it would not be wise & seasonable to provide a strong check to the admission of Foreigners into the administration of our national Government; and to declare expresly(sic) that the Command in chief of the american army shall not be given to, nor devolve on, any but a natural born Citizen.”

FIFTH
There can be no reason to believe that to be a Natural Born Citizen the requirement should not extend beyond that of one parent.
Wrong!

If the use of the term Natural Born Citizen was in fact arbitrary and had no security intent, which we proved above that it did, it’s possible that one parent would be sufficient.  But since protection of the country was at the heart of that inclusion, clearly allowing one parent’s foreign influence could never have been deemed acceptable.

So there it is. Hate it or love it.  The facts are indisputable.  Ted Cruz, Marco Rubio and the scoundrel now occupying the White House are not eligible. Period!

Unless the information and documentation provided above can be proven to be faulty or fabricated, there can be no doubt concerning what the Founders intended when they went out of their way to amend the wording of Article II.

No state court, no political party official, no District Court Judge and not even an act of Congress can change the meaning and intent of the Constitution.  The Supreme Court of these United States cannot change the meaning of any portion of the Constitution.  They are empowered only to interpret, not alter, amend or ignore any Article or Amendment.

The US Supreme Court ruling referenced above has done just that when they interpreted what they understood to be the meaning of and the requirements of a Natural Born Citizen.

If talk show hosts, pundits and so-called scholars, while wallowing in their own perceived brilliance, endeavor to impress everyone with their ability to manipulate and ignore history, and then continue to work to get Ted Cruz elected to the Presidency, enough of the base will not be convinced nor misled.  And all those bright fellows, both individually and as a whole, will suffer the burden and culpability for electing yet another despicable Democrat.