FROM A “CONSTITUTIONAL SCHOLAR?” 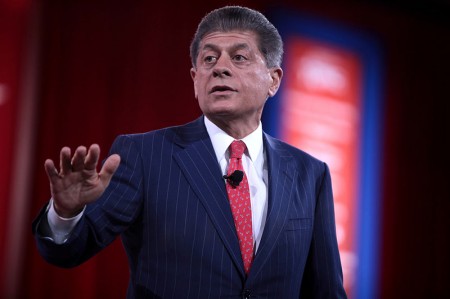 (Jan. 7, 2016) — As questions over presidential candidate Senator Ted Cruz’s constitutional eligibility have entered the mainstream over the last two days, Fox News has conducted discussions of the matter on several of its programs, including “The Five;” “Special Report,” hosted by Bret Baier; and on Thursday morning, “Fox & Friends,” with Judge Andrew Napolitano at his guest.

The topic was reignited after The Washington Post asked presidential candidate Donald Trump in an interview if he believed Cruz was a “natural born Citizen,” as Article II, Section 1, clause 5 of the U.S. Constitution requires, given Cruz’s birth in Calgary, Alberta, Canada.  Trump had initially raised the question prior to Cruz’s declaring himself a candidate last March, then more recently stated that there appeared to be no question about it.  However, on Tuesday, Trump suggested that Cruz should “do something preemptively” by perhaps asking the courts, or the U.S. Supreme Court, to issue a ruling on the matter.

On Thursday morning, when asked if he believes that Cruz is eligible, Napolitano answered in the affirmative.  Although not asked about Obama, the judge included in his response an acknowledgment that questions have existed about Barack Hussein Obama’s constitutional eligibility, although he did not mention specifics.

Napolitano then concluded his response by stating that such questions are moot “because Barack Obama is in the last year of his presidency.”

A former New Jersey Superior Court judge, Napolitano is considered a constitutional scholar and often appears as a commentator on constitutional issues on the Fox News Channel.

Of note is that Napolitano conflated the questions over Obama’s eligibility with those concerning Cruz, whose birth outside of the United States is likely the overriding potential hurdle to Cruz’s qualifying as a “natural born Citizen” in the minds of most Americans who question his eligibility.  While many Americans believe that Obama was born outside the country, perhaps in Kenya or Indonesia, as has been reported by several news sources, the U.S. media’s narrative has been that Obama was born in Hawaii.

Napolitano also did not point out the similarity in situations between Cruz and Obama wherein both men were born to fathers who were not US citizens. Cruz’s father was born in Cuba and told NPR in a 2013 interview that he became a Canadian citizen while working in the oil industry during the late 1960s and 70s. His son Ted was born on December 22, 1970 in Calgary. Cruz’s life story states that his mother, Eleanor Darragh Wilson, was born in the state of Delaware and remained a US citizen, including when her son was born.

On Wednesday evening, however, US News & World Report published an article which reported that Democrat Rep. Alan Grayson of Florida intends to challenge Cruz’s eligibility if Cruz becomes the Republican nominee. While Grayson made the announcement several weeks ago on Alan Colmes’s Fox News Radio show, a new claim attributed to Grayson by USN&WR is that Cruz’s mother may never have been a US citizen or that she became a Canadian citizen while she and her husband developed their business in Calgary.

Grayson was quoted as having said that as a matter of policy, in order to run a business in Canada, foreign citizens must take an oath of allegiance to that country and cannot operate “on a visitor’s visa for five years.”

Prior to 1934, children could not by statute inherit U.S. citizenship from their mother, but only from their father.  Titus points out that statutes passed subsequent to the ratification of the Constitution do not affect the definition of “natural born Citizen.”

CNN claims to have fully investigated Obama’s stated birth in Honolulu, HI on August 4, 1961, while Fox News’s Bill O’Reilly claimed in 2009 to have fully verified the short-form “Certification of Live Birth” which appeared on the Internet on June 12, 2008 bearing Obama’s purported information. At the time, the short-form birth certificate was reportedly the only type of birth record available to anyone born in Hawaii.  O’Reilly has additionally attempted to “explain” why Obama’s alleged Social Security number indicating it was issued by the state of Connecticut was assigned to Obama when he never lived nor worked there.

On April 27, 2011, the White House posted what it said was a scan of a certified copy of Obama’s long-form birth certificate from the Hawaii Department of Health.  However, several analysts and later, a criminal investigation, declared the image fraudulent. The mainstream media has avoided reportage on those findings.

While Napolitano did not say so, some constitutional scholars such as Atty. Herb Titus have said that the real question over Obama’s eligibility is not his birthplace, but rather, the citizenship of his parents. Titus distinguished between a person born within the geographical confines of the U.S., which he called a “citizen by birth,” to a “natural born Citizen,” who Titus said “is a citizen according to the law of nature…because of the very nature of your birth and the very nature of nations.”

Titus said that Obama does not qualify for the presidency because of his foreign-citizen father, irrespective of his birthplace.

Historically, children always inherited the citizenship of their parents, regardless of where in the world they were born.  In 1916, Atty. Breckinridge Long published a lengthy essay in the Chicago Legal News questioning the constitutional eligibility of Woodrow Wilson’s Republican opponent, Charles Evans Hughes, resulting from Hughes’s birth on U.S. soil to two British citizens.

To date, no mainstream media outlet appears to have researched the historical background of the insertion of the “natural born Citizen” clause in the Constitution, instead apparently relying on an editorial published a week prior to Cruz’s declaration of candidacy last March written by two former Solicitors General who state that anyone born to one U.S.-citizen parent anywhere in the world is a “natural born (American) citizen.”

Prior to Cruz’s entrance into the 2016 presidential race, most Americans understood “natural born Citizen” to mean “born in the United States,” an interpretation which would allow the child of Tashfeen Malik and Syed Farook, the killers of 14 Americans in San Bernardino, CA last month while injuring nearly two dozen more, could become President of the United States.

Judge Andrew Napolitano: Obama’s Eligibility Not Important Because He’s “in the Last Year of His Presidency” added on Thursday, January 7, 2016

3 Responses to "Judge Andrew Napolitano: Obama’s Eligibility Not Important Because He’s “in the Last Year of His Presidency”"