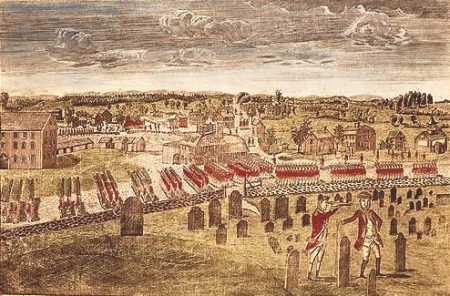 (Jan. 7, 2016) — Imagine with me if you will, it is April 19, 1775 and you are standing with 69 farmers, shopkeepers and others of your militia unit on the Green in Lexington opposing almost one thousand Redcoats who are on their way to Concord to seize the arsenal there. Riding in the lead of the Redcoats is a Royal Marine by the name of Major John Pitcairn. The major rides toward your greatly outnumbered force and commands “Disperse ye Rebels, Ye villains disperse.” In just a matter of minutes a shot rings out (a shot heard round the world) and the American Revolution and the birth of our country has begun.

The first lesson to be taken from the above is that those in power are more than willing to enforce their tyrannical will on others at the point of a bayonet, and anyone who would resist that action is a rebel and/or a villain. Here we see the assumption of the moral high ground which tyrants have used throughout history. Seizing the rights of individuals and killing those who resist must have a perceived moral underpinning or future rebels and villains would increase in numbers disproportionate to those in power, especially if they have the means to defend themselves.

The second lesson for all should be: those who have attained positions of authority over others believe their will can best be forced on others if those rebels and villains are disarmed. Of course it takes a silver tongued despot to convince individuals they are better protected by the forces of the tyrant than to assume the responsibility of providing security for themselves, their families and property. This has been recently brought to prominence by a Kenyan Socialist tyrant who this week has been successful in convincing millions of idiots that the alleged large numbers of people who have been maimed and killed in mass shootings, all of whom were in government mandated “gun free zones,” would still be alive if the whole country was a gun free zone.  This is a grand indictment of the Public Fool System and its disdain for logical thought. A person with a modicum of intelligence and the ability to reason logically would be able to see that if there exists in this country something that is placing people in harm’s way and leading to their possible death, the answer is not more of what caused the problem in the first place!

Of course this announcement was punctuated by a tear from the eye of the tyrant who has provided hundreds of thousands of assault weapons, bombs and bullets to Muslim jihadists in Libya, Iraq, Syria and other countries to fight against those who were elected to their positions of authority over others, just as he was. Our Kenyan tyrant claims the people he armed don’t agree with the current leadership in those countries and should be armed to fight their government, but insists those in this country who don’t agree with his leadership or the unconstitutional, liberty destroying path our government is on should be disarmed.

Another huge problem is: our current sitting tyrant and the evil horde we call congress, wants more and more relatives and friends of those they are either arming or killing in the Middle East to be granted access to our country and our welfare system. We have been told by those in authority these people are to be feared because they are terrorists while they are in other countries but as soon as they cross into our country they become benign “immigrants” worthy of sanctuary, housing, free medical care, free education and billions of our tax dollars.

If we are to believe the deadly scenario in San Bernardino happened the way our government and lapdog media said it did (for the record I do not), a sizable number of people were killed by Muslim terrorists—in a gun free zone, yet our government wants more of both. Only in the perverted minds of progressive socialists and mind numbed idiots does it make sense to arm those who wish to kill citizens of your country while working overtime to disarm those same citizens.

As I have pointed out on several occasions, all of our founders were not in favor of the application of the “consent of the governed” paradigm found in our Declaration of Independence. Several of them, mostly those who called themselves Federalists, worked hard to obtain a nationalist form of government, a government which was highly centralized with power over the states which created it. Regardless of their differences on how the government was to be run, not one of them was an advocate for disarming the people. To the contrary, they were all for an armed populace.

Alexander Hamilton, on one extreme, proposed a monarchical form of government with a king (national governor) and all senators appointed for life by “special electors” (the moneyed elite) with an assembly elected by the people and all state governors appointed by the king. Even so, Hamilton was an advocate for an armed public.

“… but if circumstances should at any time oblige the government to form an army of any magnitude, that army can never be formidable to the liberties of the people while there is a large body of citizens little at all inferior to them in discipline and use of arms, who stand ready to defend their rights and those of their fellow-citizens. This appears to me the only substitute that can be devised for a standing army and the best possible security against it, if it should exist.” Federalist 29

It is important to understand how our founders on both sides of the issue of government power were extremely wary of a “standing army.” Of course we have a standing army today—not only the military but also all members of law enforcement—local, state and federal. They are all there to enforce the wishes of those in power. The tyrants trick millions by referring to their unconstitutional wishes as law, but the cops will enforce those tyrannical wishes nonetheless and hold in contempt any person or groups of persons who challenge the constitutionality  of the unconstitutional governmental edicts they enforce. In the passage above by Alexander Hamilton, he states, “the best possible security against [a standing army] if it exists, is a large body of armed citizens.

Possibly the polar opposite of the powers of government advocated by Hamilton was, of course, Patrick Henry. Henry predicted so many of the problems we now have with a runaway tyrannical government and fought throughout the Virginia Ratification convention to illustrate his beliefs. The passage of over 200 years have proved how right Henry was and how many of the federalists were proved to be liars of exceptional talents. But, as you will see below, Henry agreed with Hamilton on an armed citizenry. Here are his words from the above mentioned Virginia Ratification convention on that subject.

“O sir, we should have fine times, indeed, if, to punish tyrants, it were only sufficient to assemble the people! Your arms, wherewith you could defend yourselves, are gone; and you have no longer an aristocratical, no longer a democratical spirit. Did you ever read of any revolution in a nation, brought about by the punishment of those in power, inflicted by those who had no power at all?”

Believe me, if the current immigrant nesting in the White House has his way, along with his shills in both political parties and the media, our arms, wherewith we could defend ourselves, should we be faced with the necessity of punishing a tyrant, a criminal, a rogue illegal immigrant, or a Muslim jihadist, will be gone. And Henry was perfectly correct: there was never in recorded history a revolution to punish those in power inflicted by an unarmed populace.

What our government is saying to those of us who insist on a constitutional republican form of government today are the same words Major Pitcairn spoke to the people assembled on Lexington Green in April of 1775: “Disperse ye Rebels, ye villains, disperse” and they are there for the same purpose as Major Pitcairn—to seize our arsenals.

(Author’s note: It is extremely important today that people fully understand what constitutes a “Rebel.” A rebel is sometimes defined as one who opposes authority—that is grossly incorrect— a true Rebel is one who opposes unconstitutional, tyrannical authority. A Rebel always supports lawful authority as found in our Bill of Rights—it’s what Rebels have fought for in this country for over two centuries. Rebels founded this country in 1776 and fought against tyrannical usurpation of their rights in 1861-1865. Today we face similar threats to our freedoms and Liberty just as we did in 1775 and 1861. What a great day to be a Rebel! It is also important you understand Rebel is not my name—it is who I am.)