“CONDEMNING VIOLENCE, BIGOTRY, AND HATEFUL RHETORIC TOWARDS MUSLIMS IN THE UNITED STATES” 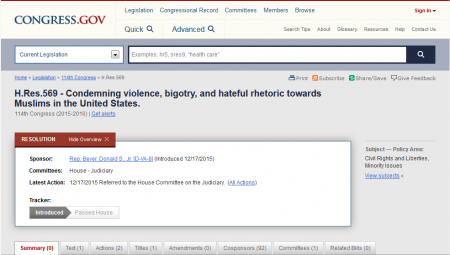 (Jan. 6, 2016) —  While family-oriented American citizens were enjoying the Christmas holidays with their loved ones, Valerie Jarrett and the occupant of the Oval Office had Obama’s Attorney General promote HR 569, which violates the 1st Amendment to the US Constitution.  HR Bill 569 is another reckless and lawless initiative by Obama.  We encourage you to contact your Congressional representatives and ask them to oppose that unconstitutional Bill.

The Republican Leadership in Congress has failed to employ the power of the purse and has failed to file legal suits in US Federal Court to restrain Obama’s violations of federal laws and the US Constitution for over 7 years.  The serious concerns of American citizens are that Congress, in 2016:

(1)   Will continue to refuse to take action to close the wide-open southern border.

(3)   Will continue to allow Obama to unilaterally disarm the US Armed Forces, when the US Congress has the Constitutional authority and power of the purse employing Article 1., Section 8, Clause 14 of the US Constitution “To make Rules for The Government and Regulations of the Land and Naval Forces.”  The Republican Leaders in Congress have always had the power to roll back Obama’s new and dangerous Rules of Engagement that are responsible for increasing the Killed In Action (KIA) by 458% and Wounded In Action by 378%.

(4)   Will continue to fund the explosive growth of DOD’s civilian work force that is over 970,000 personnel, while at the same time, it permitted Obama to purge over 250 combat-trained and tested Senior, Flag, and General Officers and reduce the strength of the US Army by hundreds of thousands of combat-trained men to a manning level below what it was prior to World War II.  Congress should have demanded, in accordance with Article 1 of the US Constitution, that Obama decrease hundreds of thousands of civilian employees in DOD, and should have employed those funds to maintain full manning of the US Army.

(5)   Will continue to allow Obama to force-feed physically “unqualified” women into tip-of-the-spear front–line combat units; that policy is degrading the “Combat Effectiveness,” morale, and unit cohesion of Special Warfare Units.

(6)   Will continue to fund the immigration and resettlement of 900.000 Middle Eastern and African refugees through 2016 at a cost of $20 billion to American taxpayers, even though the FBI informed Congress they could not do the background investigations on those refugees to determine if they had terrorist ties.  Speaker Ryan ignored the fact that 76 Islamic terrorist attacks have occurred in the US since 9/11 which have killed Americans; 82 ISIS terrorist plots designed to kill Americans have been foiled by the FBI; 250+ newly-accepted refugees from the Middle East and Africa have traveled overseas to participate with ISIS in their genocide of Christians; and the FBI has opened over 900 terrorist cases in all 50 states and is understaffed to prosecute those cases.

(7)   After suspending the debt ceiling twice this year, the Republican Congress wrote Obama a blank check and funded the 2009-page, $1.5 trillion Omnibus Spending Bill that no one in Congress read before voting for its passage.  That bill supported every one of Obama’s Socialist/Leftist programs through October 1, 2016, even though many of Obama’s programs have continued to violate the US Constitution and US laws, including immigration laws.  By driving that bill through Congress, Ryan and McConnell took the power of the purse off the table for the rest of Obama’s term in office, which was emblematic of Boehner’s modus operandi of giving Obama everything he wanted despite how it outweighed the voice of their constituents and the American people; by that action they absolutely lost the confidence and support of the American people.  Senator Chuck Schumer (D-NY) jubilantly declared about the Omnibus Spending Bill, “The bill we’re passing reflects Democratic values.” He boasted, “…even though we’re in the minority.”

(8)   Will continue to support Obama’s $9.76 trillion out-of-control spending over the 8 years of his term which is driving the federal debt to exceed $20 trillion, allowing Obama to create more debt than all the 43 previous US Presidents combined in 239 years; while at the same time, Congress did absolutely nothing to try to eliminate the annual loss of hundreds of billions of dollars in fraud, waste, abuse, and theft that goes on in the bloated and wasteful federal bureaucracy.

(9) Will prevent Obama from placing thousands of Americans on the airport terror watch list (which now exceeds 47,000 people), as another way to penalize his opponents. Thousands of those Americans should never have been placed on the airport terror watch list.  Now Obama is using his bully pulpit to justify the issuance of another of his lawless and illegal Executive Orders to prevent many innocent Americans, who were illegally placed on the terror watch list, from purchasing guns.  Obama is planning on issuing more Executive Orders to violate the 2nd Amendment and freedom, safety, and right to self-defense of American citizens.  While Obama fights  “Gun Violence,” he is releasing 130,000 convicted Mexican drug dealers from prisons into the general US population, importing radical Islamic terrorists through the immigration of 900,000 refugees from the Middle East and Africa, and allowing thousands of gangbangers to enter the US each month through the wide-open southern border.

Speaker Ryan was only able to pass the Omnibus Spending Bill last month by getting Pelosi’s Democrat conference to vote against the 95 Republican Congressmen who opposed passage of that out-of-control Omnibus Spending Bill, which is full of pork; Speaker Ryan obtained Former Speaker Boehner’s help in structuring the bill and lobbying for its passage.  It was the first time that any Speaker of the House opposed members of his “own” Republican conference and went across the aisle to seek Pelosi’s help to get the Democrat Party caucus to vote against 95 Republicans who opposed the Omnibus Spending Bill in order to pass it.

American citizens have been “ignored and betrayed” for 7 years by Obama, the Republican leadership in Congress, Pelosi’s Democratic Caucus, the Washington, DC ruling political class,  lobbyists on “K” Street, the cronies at the Chamber of Commerce, and by the left-of-center liberal media establishment, who continue to ignore and cover up the violations of the US Constitution, US federal laws, and US immigration laws by the Obama administration with Obama’s illegal Executive Orders.

Article 1 of the US Constitution gives only Congress the authority to enact laws, which Obama has continued to violate by issuing his lawless Executive Orders for over 7 years. The inept Congress never took the necessary actions to protect its position as an equal branch of government by filing law suits in federal courts to stop repeated violations of the US Constitution by Obama, or by employing the power of the purse to rein in Obama’s lawless actions.

Obama continues to tell bold-faced lies to American citizens about the Fast & Furious gun-running operation of weapons to Mexican drug cartels in violation of US federal laws, about the IRS scandal that violated the freedom to participate in elections by conservatives, the cause of the Benghazi attack, his refusal to issue cross-border authority to launch a rescue mission, the Obamacare scandal when he said they could keep their doctor and medical insurance, the gun-running operation in Libya of weapons to Al Qaeda terrorists in Syria in violation of US laws, how he obtained a Connecticut Social Security Number when he never lived in Connecticut, how Obama had the Pentagon falsify reports on the strength of ISIS and about military successes in the fight against ISIS, and he continues to tell many more bold-faced lies.

We remember members of the US Armed Forces who have gone before us through the ages, who dedicated their service to preserve the Republic, and we strive to honor their sacrifice by working to recruit Combat Veterans to run for Congress who will protect and defend the US Constitution.  We solicit your support to help us recruit, do the background investigation, campaign for, and help elect a new slate of endorsed Combat Veterans For Congress in 2016, and we encourage you to forward our op-eds to those in your address book who would support our efforts to protect and defend the US Constitution.

Obama’s Proposed Legislation With HR 569 and the Omnibus Spending Bill Violate the US Constitution added on Wednesday, January 6, 2016