THE DIMENSION OF “ETERNITY” 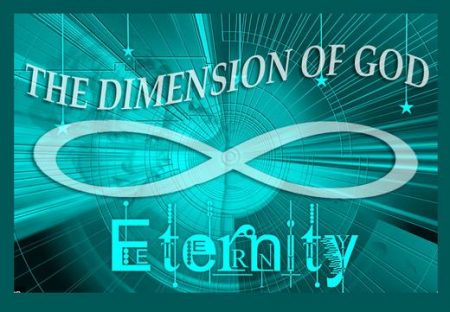 (Jan. 4, 2016) — As people of faith reflect on the miracle of the Christ child and His resurrection, churches can expect unusually high attendance on Christmas and Easter.  However, there are an increasing number of those that believe science has disproved the existence of God, and therefore believe that those that rely on His precepts and principles are intellectually deficient.  Since the increase of this atheistic belief system is directly proportional to the decrease in the quality of life we enjoy here in America, the scientific argument regarding the existence of God is as important a cultural issue as it is a faith issue.

Men of science have traditionally tried to answer the “God” question for millennia, using their understanding of current scientific phenomena as a basis for their theorems, the most recent being Dr. Stephen Hawking, one of the most acclaimed physicists in the world.  Dr. Hawking prefaces his conclusions with a simple question:  What was God doing before the creation?  He bases his atheism on what he holds to be a profound and sincere inquiry – totally unaware of the assumptive flaws in the model that he believes is scientifically testable.  Hawking has wrestled with the question of whether or not the universe required a creator to begin or is the initial state of the universe determined by a law of science.  This postulation is riddled with misunderstandings of mega-proportions right off the bat.  What Hawking has failed to understand is that at this stage of the game the laws of science were created as God spoke things into existence.  Therefore, trying to bind God into a time dimension that is ruled by the laws of science present in our creation is a flawed standard. For example, the laws of genetics came into existence when God determined that animals (including humans) would reproduce after their own kind.  When God made this determination as part of His design plan, He also created the scientific laws that would support His design.  This wasn’t magic.  It was solid science brought into existence by a Supreme Being as part of His creative design – and it is a scientific law that directly refutes Darwinian evolution.

Stick with me.  This may sound a little technical but it’s only necessary that you understand that it makes those that believe in it wise in their own eyes – which is a wisdom limited by human understanding.  In Hawking’s universe, nothing existed before time, therefore nothing (or no one) could have created time.  In technical terms: this led to him and Jim Hartle reaching the conclusion that everything developed through spontaneous quantum fluctuations giving way to inflation, which in turn produced a very large and uniform universe that also accommodated the possibilities of slight non-uniformity variations. In laymen’s terms:  we are the product of random bursts of energy that occurred in the early universe.

In Hawking’s and Hartle’s defense, chances are they would have never reached this heady conclusion if they had studied the first six days of Genesis with the same vigor and intensity that they studied quantum physics and General Relativity. If they had, they would have discovered that the biblical creation account tells us that God created time and space in Genesis 1:1.  Explanation:  “In the beginning” is a reference to the start of time; and the “heavens and the earth” is a reference to the cosmos and matter.  Interestingly, the Hebrew translation take us even further.  Genesis 1:2 A states:  “The earth was without form and void…”  It would be easy to assume that this means that the earth itself was a lump of an ever-morphing shape-changing mass.  What it actually means in Hebrew is that there was initially a primeval state of  emptiness that was filled with chaos or confusion.  As “confusing” as this may be (and it certainly should have been confusing to Moses who wrote it close to 4000 years ago), vacuum physics provided the understanding when it discovered that vacuums contain quantum fluctuations – or chaotic bursts of energy that are in constant movement.  This actually is a reference to the laws that produce the quantum fluctuations (random bursts of energy) that Hawkings and Hartle rely on in their conclusions.

Physics aside, there are many biblical references that tell us that God and His angels exist in a dimension outside of the space/time continuum that contains our universe.  The assertion of this extra-dimensional existence flies in the face of Hawking’s conclusion that nothing can or did exist before time. And without realizing it, Hawking’s conclusions also discount the possibility of time travel.  His conclusions are based on his experience or knowledge foundation, not on the whole of existence that lies outside the realm of his limited understanding. It follows scientifically as well as logically, that if God is the creator of time and space, then He would have to have existed outside of time and space.  The Bible refers to this dimension as “eternity.” Hawking failed to understand or accept this reasoning, which made his assumptions and conclusions just plain wrong.  Conversely, if we are to love the Lord our God with our mind as well as the rest of our being in this modern scientific age, we must understand that He is as much the Lord of time as He is the Lord of creation.  The two cannot be separated.

As stated previously, there are many verses that attest to the Lordship of God our Creator living in a dimension outside of our space/time continuum.  Revelation 13:8 states that Christ is the Lamb of God who was slain before the foundation of the world.  In other words, God’s plan of salvation through the crucifixion of His Son was designed before the creation of the universe. If we take that to the next step, it is reasonable to assume that if this plan was designed by God before the creation, then apparently God existed prior to the creation and creation’s time dimension.  There are many verses that refer to the foreknowledge of God, which can only exist if God has a way of knowing the end from the beginning.  This is an indication that His knowledge is not bound by the passage of time in our dimension but is available to Him outside of our time dimension.  Romans 8:29; Isaiah 46:10; Jeremiah 1:5, and Ephesians 1:4 are only the tip of the iceberg in this regard.  Additionally, there are the angels who often showed prophets things that were going to happen in the future, as in Revelation 4:1.  This implies strongly that the angelic realm did not have to tell the prophets what was going to happen but somehow, some way were able to transcend time and space and literally show them the future.

The Lordship of God over time and space may not have been important to understand in primeval times, but as men like Stephen Hawking and John Hartle make impressive and sincerely-held arguments discounting the existence of God by setting up straw men arguments, then it is imperative that the children of God understand the error of their assumptions and consequential conclusions.  You see, my dear believer, our hope does not lie in this world or the space/time continuum within which it exists.  Our hope lies in spending eternity with our God, who is Lord of time and all creation.  So, when we celebrate the times and life of Jesus, we would do well to celebrate the existence of His Father’s house – a house where we have a mansion waiting for us in a time dimension called “eternity.”…And we would do well to celebrate that no matter what happens in the future, it is not a surprise to God.  He already knows it and He has already seen it… And we would do exceedingly well to remember that science and those acclaimed to be its most ardent apologists are not the Lord of Time or Creation.  They are flawed men, making flawed conclusion, based on flawed assumptions.  If you believe God is God, worship Him and Him only.  Then and only then, will eternity hold your greatest hope and not condemnation.