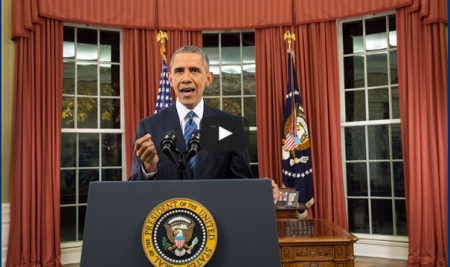 (Dec. 7, 2015) — Until January 2009, we had never seen the likes of Barack Hussein Obama from anyone in leadership positions…let alone the president of the United States.  I daresay we have likely never seen anyone in the world like him.  During his initial campaign for the presidency in 2008 he said he would “transform” the country from its very foundation.  People who had graduated high school no later than the 1960s knew full well what that meant.  After that time period the essential dumbing-down of America’s student children began in earnest.  Obama was not shy with his meaning that the USA had to be destroyed at its core and then rebuilt in what would become his and Islam’s image.  He is doing it and has almost finished his straightforward—if not perverse—mission.  The following is a short and very partial list of those things for which Obama is the proudest.

As we have yet to even truly try to stop any of Obama’s illegal actions, he has become bolder and bolder.  This is what each and every dictator in history—especially Islamic–has done.  If there is no real push-back, they take over and conquer, then kill, the dissidents.  Dissidents=those who oppose their own slavery and/or death at the hands of their oppressors.

The American people were warned repeatedly about Obama when he began his political career.  No one—including the media–bothered to vet him.  When Obama made patently anti-White racist statements in his two books, few paid any attention.  Here are some of them…

“From Dreams From My Father: ‘I ceased to advertise my mother’s race at the age of 12 or 13, when I began to suspect that by doing so I was ingratiating myself to whites’.

“From Dreams From My Father: ‘There was something about him that made me wary, a little too sure of himself, maybe. And white’.

“From Dreams From My Father: ‘It remained necessary to prove which side you were on, to show your loyalty to the black masses, to strike out and name names’.

“From Dreams From My Father: ‘I never emulate white men and brown men whose fates didn’t speak to my own. It was into my father’s image, the black man, son of Africa, that I’d packed all the attributes I sought in myself, the attributes of Martin and Malcolm, DuBois and Mandela’.

“From Audacity of Hope: “Of course, not all my conversations in immigrant communities follow this easy pattern. In the wake of 9/11, my meetings with Arab and Pakistani Americans, for example, have a more urgent quality, for the stories of detentions and FBI questioning and hard stares from neighbors have shaken their sense of security and belonging. They have been reminded that the history of immigration in this country has a dark underbelly; they need specific assurances that their citizenship really means something, that America has learned the right lessons from the Japanese internments during World War II, and that I will stand with them should the political winds shift in an ugly direction.”

At this juncture, we appear to be at the end of our country.  On a almost daily basis, more and more illegals—including more and more Islamists—are entering our country illegally.  They are replacing us.  People who refuse to call them illegals are either Obama collaborators or idiots.  And…Obama is bent upon bringing in unvetted Muslims from all corners of the world, while calling them “refugees” when they are actually invaders.  However, according to The Hill, Breitbart and other publications, few to no Christian refugees are being allowed into the USA…ONLY Muslims.

As much as I hate to say it, we’re out of time.  Make sure your preparations for survival are as good and complete as is humanly possible.  If you’re not a believer in the God of Abraham, Isaac and Jacob, you should think about becoming one…and quickly.   All is unfolding as was designed a very long time ago.  Humans refused to stop evil in the distant past…and it appears the same is true now. Warnings can only be given for so long before the chosen inevitable consequences of not heeding them explode.  May God be with us…

“Beloved, now are we the sons of God, and it doth not yet appear what we shall be: but we know that, when he shall appear, we shall be like him; for we shall see him as he is”–1 John 3:2

Loretta Lynch Says to Muslims ‘We Stand with You in This’
http://www.breitbart.com/big-government/2015/12/04/loretta-lynch-vows-doj-will-target-anti-muslim-speech/

No room in America for Christian refugees
http://thehill.com/blogs/congress-blog/foreign-policy/228670-no-room-in-america-for-christian-refugees