Thank you for publishing “Crippled America”, a no-nonsense educational and motivational dissertation on how to make America great again.

Having been born in 1935, I had the good fortune to grow up in the shadows of ‘America’s Greatest Generation’ – as a part of what many now call ‘The Luckiest Generation”. With much dismay, I have watched America deteriorate from a really great Nation to a corrupted shell of its former self. Your plans and proven abilities give me and millions of patriotic Americans much hope for its ultimate restoration.

I have just completed reading “Crippled America”, and would like to make the following comments, … and ask a few questions:

1.    Your logical approach to illegal immigration could well be entitled “ATTRITION THROUGH ENFORCEMENT”: Enforce our immigration laws, Enforce a ban on welfare for illegal aliens, and Enforce E-Verify for all employers (citizens, businesses, & government) – so that when they can’t get jobs or welfare, they will self-deport to their homelands (all 20 to 40 million of them).  NOTE: I’m sure the American taxpayer will be happy to provide free transportation for them and their children, as we would not want them to split up their families and leave their ‘subject to their jurisdiction’ children behind.

2.    You are absolutely on target when you say our so-called “Health Care System” is making us sick. It is a ‘Business of Disease’ – run by the corrupted and criminal AMA, FDA, CDC, & Big Pharma.  Their vaccine program is a hoax that must be stopped … along with their Cut, Poison, & Burn treatments for cancer.

3.    As regards fixing the broken tax system, may I suggest that you put your best people onto studying the revelations and successes of Peter Hendrickson (www.LostHorizons.com), author of ‘Cracking The Code’, ‘Upholding the Law’, and ‘Was Grandpa Really a Moron?’ (when he ratified the 16th Amendment). Then you will be able to rectify the broken tax system so that it also comports with the Constitutional limitations of ‘Excise’ and ‘Capitation’ taxes only, as Mr. Hendrickson so well explains.

4.    I am pleased to say that I, too, own guns, and fortunately I, too, have never had to use them.  And I would feel safer and more comfortable knowing that everyone around me was carrying as well.

5.    Chapter 13 of ‘Crippled America’ (VALUES), with your plans to help put Christ back in Christmas (among other great ideas), should be published for all to read on the internet.  ‘Values’ that will go a long way towards making America truly great again.

Finally, I would like to offer you full and unfettered use of my copyrighted graphic description of The Declaration of Independence and the Constitution of the United States of America. 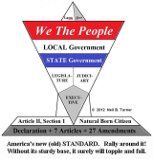 I think you will agree that this top-heavy structure can remain upright only when we strongly support and constrain it at the Executive, Legislature, and Judiciary level by the restrictions embodied in The Declaration + the 7 Articles + the 27 Amendments. You may recall my Executive Summary (attached) concerning the requirements for a Natural Born Citizen that was presented to you in your New York office by Jeff Lichter and other members of the Tea Party Patriots of Surprise, AZ, back in 2011.  I look forward to your applying its principles as you progress in your much needed and much appreciated campaign for the Office of President and Commander in Chief.