MEDIA HAVE FALLEN SILENT SINCE RELEASE OF RECORDINGS, INVESTIGATOR’S TESTIMONY 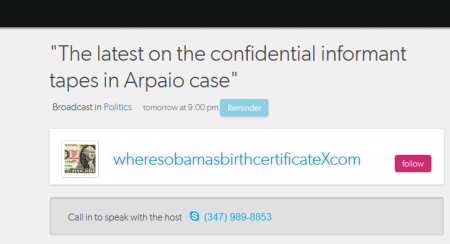 (Nov. 18, 2015) — WheresObamasBirthCertificate (WOBC) will host a radio show on Thursday evening captioned “The latest on the confidential informant tapes in Arpaio case,” referring to recordings in which Maricopa County Sheriff Joseph M. Arpaio and others discussed the investigation into Obama’s long-form birth certificate and a billionaire’s report that the CIA had ordered the collection of voter registration records and breaches of tens of thousands of bank accounts in Arizona and nationwide.

Melendres claimed that Arpaio’s deputies had employed racial profiling during traffic stops and immigration searches.  Snow has largely ruled in favor of the plaintiffs over the years and imposed an injunction suspending the immigration patrols in December 2011.

A charge of civil contempt against Arpaio for failing to uphold Snow’s injunction resulted in the plaintiffs’ insistence that recordings stemming from an investigation Arpaio commissioned with confidential informant Dennis Montgomery in November 2013 be released, regardless of whether or not they were germane to the Melendres case.  The catalyst was an article in the Phoenix New Times titled “Joe Arpaio’s Investigating Federal Judge G. Murray Snow, DOJ, Sources Say, and Using a Seattle Scammer To Do It.”

The New Times is sympathetic to “undocumented students” and other illegal aliens.  Its main source of information in Melendres is plaintiffs’ ACLU attorney Cecillia Wang.

Last week, Mike Zullo, leader of Arpaio’s Cold Case Posse, which in 2012 determined that Obama’s long-form birth certificate and Selective Service registration form are “computer-generated forgeries,” testified as to his knowledge of the “Seattle operation” conducted by Montgomery. His testimony supported that of Arpaio and his staff which stated that, contrary to Snow’s apparent belief, Montgomery was not hired to investigate Snow or anyone in his family.

On the second recording, Arpaio and Zullo are heard speculating as to how billionaire Tim Blixseth’s report, if ultimately proven accurate, might have tied in to their investigation of Obama’s long-form birth certificate, including a hypothetical breach of the Hawaii Department of Health’s database.

On Tuesday, Zullo informed The Post & Email that the recordings played in court last week are “snippets of information” from longer recordings and that some recordings and other evidence were not made public.  “There’s a lot of other information out there,” Zullo said.

Although media coverage of Melendres and the civil contempt hearings was heavy through last Thursday, through which time Zullo had invoked his Fifth Amendment right not to answer questions, the press has been all but silent after the playing of the recordings and Zullo’s decision to answer questions beginning on Thursday afternoon.

No member of the Arizona media has interviewed Zullo following the completion of his testimony on Friday.