DOES IT OPPOSE THEIR AGENDA?

(Nov. 17, 2015) — Other than the Phoenix New Times and this publication, the media appears to have completely avoided reporting on the contents of several audio-recordings subpoenaed by U.S. District Court Judge G. Murray Snow in the civil contempt trial of Maricopa County Sheriff Joseph M. Arpaio and other defendants.

There was significant media reportage of the case, Melendres, et al v. Arpaio, et al, including by the Associated Press, leading up to last week’s testimony of Mike Zullo, who Arpaio commissioned to oversee the work of a confidential informant for approximately a year.

In April hearings in the civil contempt trial, Snow unexpectedly held up an article by Stephen Lemons in the Phoenix New Times dated June 4, 2014 titled “Joe Arpaio’s Investigating Federal Judge G. Murray Snow, DOJ, Sources Say, and Using a Seattle Scammer To Do It” and asked if it were accurate.

On different days, Arpaio and Sheridan testified that Snow was never investigated and that Montgomery’s work centered on the claim that tens of thousands of Maricopa County residents’ bank account information had been breached, that the CIA had wiretapped Arpaio’s and others’ phones, and that a government entity had hacked into the email accounts of federal judges, including Snow.

Plaintiffs’ attorney Cecillia Wang included the PNT article in her motion asking Snow to compel the production of all materials from Montgomery’s probe.  Wang is also Lemons’ primary source of information on the case.

The plaintiffs then subpoenaed all of the documentation produced from Montgomery’s probe.  When Zullo attempted to withhold 87 exhibits, Snow refused.

After Zullo was informed by Arpaio’s defense counsel that they were not providing him legal representation, he filed a motion for an extension of 30 days to retain an attorney which Snow denied.  Zullo asked Maricopa County to provide him with counsel, a request which was also refused without a reason.  “It’s pretty clear to me that if you want counsel, you’ll have to pay for it yourself,” Snow said during a status hearing.

During two depositions in October and November, respectively, as well as on Tuesday and Thursday morning, Zullo invoked his Fifth Amendment right not to self-incriminate. However, on Thursday afternoon, Zullo began responding to questions first posed by Arpaio’s defense counsel and later by plaintiffs’ attorney Stanley Young.

While on the stand on Thursday, Zullo, who was said to have raised his voice with emotion at times in response to questions, corroborated Arpaio’s and others’ testimony that Snow was never an object of Montgomery’s work.  Several recordings collected by the court from the Seattle operation were played, but local and national media have not reported on their contents other than those stated above.

The first recording reveals the initial meeting held in 2012 among Arpaio; wealthy businessman Tim Blixseth; his attorney, Michael Flynn, who had also represented Montgomery at one time; Det. Brian Mackiewicz, and Zullo.  Blixseth approached Arpaio to relate that Montgomery described to him his own alleged computer hacking, reportedly at the direction of the CIA, of more than 150,000 Maricopa County bank accounts for an undisclosed reason, along with the collection of 900 million phone calls of Americans.

According to Blixseth, Montgomery scoffed at the revelations of former NSA contractor Edward Snowden, who in June 2013 fled the United States for Hong Kong to speak with The Guardian’s Glenn Greenwald about the government’s collection of data from Americans without their knowledge.  Montgomery reportedly claimed to have much more compelling information.

In the second recording, the men discussed Blixseth’s claim that Montgomery had alleged that a young man hired by CIA Director John Brennan when he was CEO of The Analysis Group was about to testify to Congress about Obama’s “birth certificate” but received “a bullet between the eyes.”

Arpaio is heard saying that “the government” was involved in creating a forgery for Obama.  Arpaio specifically mentioned that Congress had refused to investigate the findings of his Cold Case Posse, led by Zullo in a probe Arpaio commissioned, that Obama’s long-form birth certificate posted on the White House website is a “computer-generated forgery.”  Arpaio speculated that Congress might focus on the “birth certificate” matter if Montgomery’s claim to a nexus between government spying and the creation of one or more forgeries was borne out.

Zullo is also heard opining that Blixseth’s allegation of Mongtomery’s hacking into the “mainframe” at the Hawaii Department of Health” might explain why Obama’s alleged birth certificate number is “all screwed up.”

The Phoenix New Times and numerous other publications have ridiculed anyone who has doubted Obama’s life story and claimed birthplace of Honolulu, HI on August 4, 1961.  Following two 2012 press conferences by Arpaio and Zullo, who explained how the posse had arrived at its conclusions about Obama’s long-form birth certificate and Selective Service registration form, the media went silent.

Arpaio told a radio host last year that the behavior of the media regarding the posse’s findings of forgery was unprecedented in his experience.

In a search on Tuesday for “Zullo Arpaio tapes Snow,” no current articles are found: 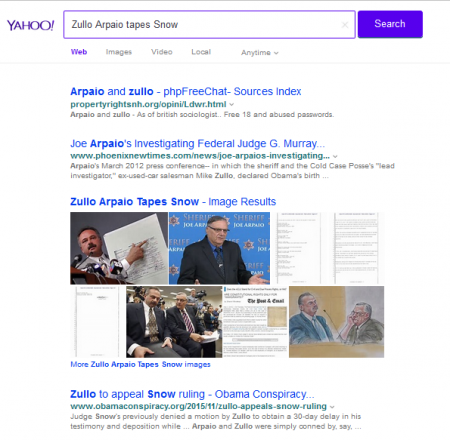 A search for the terms “Zullo Arpaio recordings Snow civil contempt” yielded only articles written prior to Zullo’s testimony, including one from The Post & Email published on November 7. 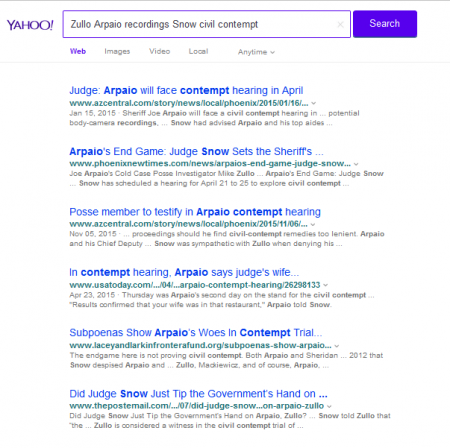 Blixseth told Arpaio that foreign embassies’ computer systems and the personal information belonging to Donald Trump, among many others, were also hacked, according to Montgomery.

Snow was not a topic of conversation on the recordings which were made public.  The third and fourth recordings are each less than two minutes and involve conversations between Zullo and Montgomery.

Lemons often reminds his readers that the Phoenix New Times broke the story of the “Seattle operation.”

In a statement on Tuesday, Zullo told The Post & Email, referring to the released recordings:

This is snippets of information as to what the plaintiffs (the ACLU and Covington & Burling) did against Arpaio to weave a tapestry of deceit.  You’re getting pieces of recordings.  There’s a lot of other information out there.