COMPLAINTS OF ABSENCE OF “COLLEGE TRANSCRIPT” AFTER “7 YEARS,” BUT WHAT ABOUT HIM?

(Nov. 10, 2015) — Late Tuesday morning, The Post & Email noted a tweet from presidential candidate Sen. Ted Cruz, who posted a link to an article claiming that The New York Times has dispatched investigators to Cuba to check into his father’s background.

“After 7 years, the NYT can’t unearth a college transcript, but they’re sending reporters to Cuba to attack my dad?” Cruz wrote, providing a link to an article at The Right Scoop.

Cruz’s tweet appears to refer to Obama’s failure to release his college transcripts, which fellow 2015 presidential contender Donald Trump believes may hold the key to Obama’s citizenship and presidential eligibility. Last year during a press conference, Trump said that he believes that Obama either falsified his applications to say that he was a foreign national or correctly stated that he was a foreign national in order to obtain financial aid designated for such students attending universities in the United States.

Dr. Benjamin Carson, another Republican presidential candidate, called for Obama to release “all” of his records in May of last year on Alan Colmes’s radio show.

It is well-known that Cruz’s father, Rafael Bienvenido Cruz, fled Cuba during the chaos accompanying the Cuban revolution for Texas, where he worked at menial jobs and reportedly put himself through college.

Rafael is said to have advocated for Fidel Castro, who ousted former dictator Fulgencio Batista in a military coup which has blanketed the tiny nation in communism since 1959.

The Right Scoop’s piece quotes from a New York Times article dated November 9, 2015 in which The Times claims to have obtained Rafael Cruz’s school records from 1954 from Matanzas, Cuba.

The newspaper takes issue with some of the statements Rafael has made while campaigning for his son, citing interviews with residents of communist Cuba who might have been acquainted with the elder Cruz during the revolution nearly 60 years ago.

Cuba does not allow freedom of speech.

Neither The New York Times nor any other mainstream media outlet has investigated Obama’s claim to have been born in Hawaii on August 4, 1961, even following the results of a criminal investigation which show that his long-form birth certificate and Selective Service registration form are “computer-generated forgeries.”

The Times acknowledges that Rafael Cruz has “questioned Mr. Obama’s citizenship” during rallies for his son.

The media did not investigate why members of the Kenyan Parliament referred to Obama as having been born in their country, nor why the Associated Press was said to have reported Obama as “Kenyan-born” in 2004.  NPR also first reported that Obama’s birthplace was Kenya, then changed it to say that he was born in Hawaii, as did his literary agent in 2007 after its “fact checking error” of 16 years.

MSNBC commentator Chris Matthews and The Honolulu Advertiser’s Will Hoover reported Obama as “born in Indonesia” in 2007 and 2006, respectively.  Hoover soon altered his article to say that Obama was “born in Hawaii,” blaming his reported error on a hasty internet search in attempt to meet a deadline before making a trip to the mainland.

Article II, Section 1, clause 5 of the US Constitution requires that the president be a “natural born Citizen,” the meaning of which in modern times is unclear. Historical evidence appears to indicate that during the days of the Founders, the citizenship of the parents, or father, was paramount to the birthplace of the child.  Today, however, most Americans understand the term to mean “born in the United States.”

The media often does not distinguish between “citizen,” which is required of U.S. representatives and U.S. senators, and “natural born Citizen,” which was designated in the Constitution only for the office of president. 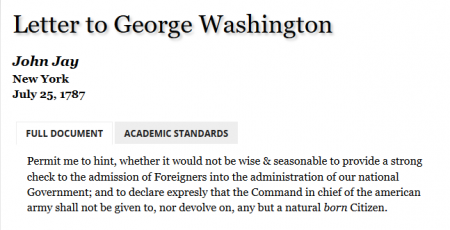 In March of this year, Cruz declared himself a presidential candidate amid questions as to whether or not a foreign-born person can serve as President of the United States and Commander-in-chief of the US military.  One week prior, two former solicitors general working under Democrat and Republican presidents, respectively, issued an opinion piece in the Harvard Law Review stating that although born in another country, Cruz is eligible for the presidency by virtue of his birth to a U.S.-citizen mother.

When Cruz was born in Calgary, Alberta, Canada on December 22, 1970, his father was either a Cuban citizen or Canadian citizen, as Rafael has stated that he became a Canadian citizen while working in the oil industry in that country in the years surrounding his son’s birth there.

Cruz’s mother was a U.S. citizen who some believe, although no proof has been presented, also obtained Canadian citizenship during the family’s business endeavors.

After Cruz announced his candidacy, The Post & Email sought, through a number of FOIA requests, his financial aid applications, Selective Service registration form, any documentation on file with the U.S. State Department and U.S. Citizenship and Immigration Services (USCIS), and records from the Federal Trade Commission (FTC) and American Bar Association.

In April, we sent his campaign a letter by certified mail asking that he release all personal documentation or sign a release authorizing The Post & Email to obtain it.  We received proof of delivery of the letter but no response.

In response to our FOIA requests, the Selective Service System released a form with an accompanying letter indicating that Cruz was registered with the agency through his financial aid application. However, the Department of Education (DOE) refused to release Cruz’s financial aid applications unless we could prove, under penalty of perjury, that we were a relative or someone with a tangible interest in the record.

Cruz had worked at the FTC before his nomination to become Texas Solicitor General.  The state of Texas released his application forms from that position, which did not ask the applicant to state his citizenship status.

The American Bar Association did not respond to our request, which was sent through their web portal. The State Department and USCIS advised that unless we had a direct interest, we could not obtain any documentation which might exist.  The Federal Trade Commission responded that all publicly-available documents had been posted on its website.

In August 2013, The Dallas Morning News released what it said was a scan of Ted Cruz’s birth certificate from Canada in an article raising the issue of his “dual citizenship” in any hypothetical presidential run.

Whether or not Cruz was registered as a U.S. citizen born abroad at the time of his birth is as yet unproven, as Cruz apparently has not authorized the release of his records for public scrutiny.

2 Responses to "Will Sen. Ted Cruz Release His Documentation?"