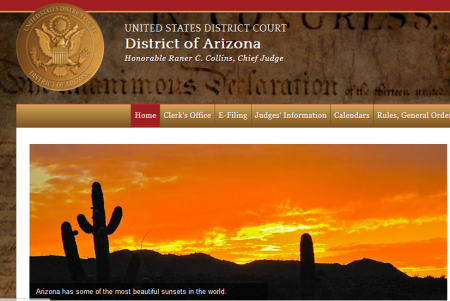 Melendres is a long-running civil lawsuit filed against Maricopa County Sheriff Joseph M. Arpaio, Maricopa County, and unnamed other defendants to include Arpaio’s deputies.  Snow, who has presided over the case since July 2009, has agreed with the plaintiffs that Arpaio and his deputies racially profiled the subjects of traffic stops and immigration sweeps conducted in conjunction with the Immigration and Customs Enforcement’s (ICE) 287(g) program which deputizes county sheriffs and local police departments to enforce federal immigration law.

As a result of the lawsuit, Maricopa County lost its 287(g) contract with ICE.  In December 2011, Snow issued a temporary injunction barring immigration controls pending the outcome of the civil litigation.

In December 2013, Snow issued an opinion stating that the plaintiffs’ civil and constitutional rights had been violated by Arpaio’s policies and ordered corrective measures, including a court-appointed monitor to ensure that the Maricopa County Sheriff’s Office (MCSO) came into compliance.

After accusations surfaced that Arpaio had not carried out Snow’s orders, Arpaio admitted last March to failing to order his deputies to cease carrying out immigration patrols for 18 months following Snow’s injunction, after which Snow scheduled a trial on a charge of civil contempt.

On October 6, Conrad signed the “Motion to Seal Pleading” on Brnovich’s behalf.  Its brief text reads:

The remaining four pages of the filing contain the names of the attorneys to whom copies of the motion were sent.  The document is numbered “1443” in the Melendres case.

On the same day, as document #1442, Brnovich filed a Notice of Special Appearance for State of Arizona, which began: 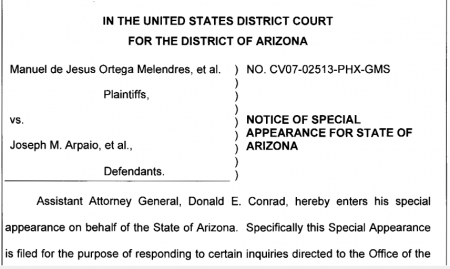 and referred to the “status of a criminal investigation.”

It has been reported that a confidential informant to the Maricopa County Sheriff’s Office, Dennis Montgomery, met with then-Arizona Attorney General Tom Horne on December 11, 2013.

During a hearing on April 23, Snow unexpectedly questioned Arpaio about a June 4, 2014 article in the Phoenix New Times which alleged that Montgomery was “investigating” Snow and the U.S. Department of Justice on Arpaio’s behalf.  Arpaio testified that Montgomery had been developing information relative to what he reported was the breaching of approximately 150,000 bank accounts of Maricopa County residents by a government entity. Under questioning, Arpaio responded that Montgomery indicated that “someone” had also breached the email accounts and telephone lines of various parties, to include Snow himself.

The following day, however, Arpaio’s chief deputy, Gerard Sheridan, testified that wiretap codes Montgomery provided were confirmed accurate by U.S. District Court Judge Royce C. Lamberth, who from 1995 to 2002 presided over the FISA court, which decides whether or not warrantless wiretapping can go forward.

On Monday morning Arizona time, an individual who assisted in overseeing Montgomery’s project work, Mike Zullo, was scheduled for a second deposition by Melendres plaintiffs’ attorneys.  During the first deposition on October 23, Zullo declined to answer questions for lack of counsel.

Montgomery’s work product was reportedly turned over to Zullo and Arpaio, who in late April relinquished it to Arpaio’s attorneys at the firm Jones, Skelton & Hochuli.  At the time and until very recently, Zullo was led to believe that the same attorneys represented him. When the attorneys several weeks ago denied that Zullo was their client, Zullo requested the court to allow him 30 days to find an attorney, which Snow denied.

Zullo desired representation as a result of his request to JSH to withhold a reported 87 exhibits from the court and plaintiffs’ attorneys, invoking his Fourth, Fifth, Sixth Amendment and due process rights.

Snow denied Zullo’s requests, stating that between October 21, when he claimed Zullo knew that JSH did not represent him, and October 23, the day of the first deposition, Zullo had adequate time to retain representation.

Maricopa County officials have not responded to The Post & Email’s inquiries as to whether or not the county will provide Zullo counsel at taxpayer expense.  Zullo is the only individual tasked with involvement in Montgomery’s research who does not have the benefit of legal representation.

Snow’s Monday order is one paragraph, and his response is filed under seal. 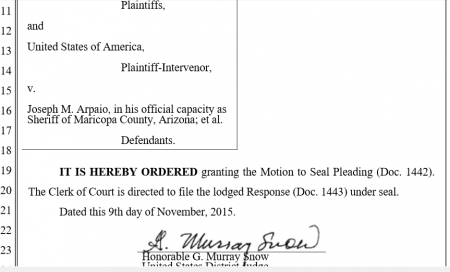 An entry for the “SEALED RESPONSE” appears on the docket:

When clicking the link associated with the filing, it leads the user to the message: