“THE FIFTH AMENDMENT DOES NOT APPLY”

In the motion filed October 28, Zullo originally asked for 30 days to find an attorney to represent him after discovering that attorneys for Maricopa County Sheriff Joseph M. Arpaio told the court that they do not represented him, contrary to their earlier statements.  Snow denied the motion and issued an order that instead, Zullo’s filing would be interpreted as a Motion for Protective Order.

That order was denied today, along with a later motion Zullo filed to “Stay Court Orders Requiring Testimony and Notice of Intent to Appeal.” 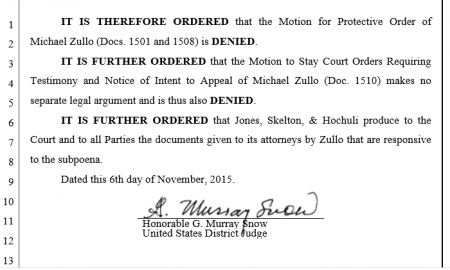 Zullo was tasked by Arpaio with overseeing the work of a confidential informant for approximately 18 months beginning in the fall of 2013 and ending this past spring. The work product of the informant, Dennis Montgomery, became a subject of civil contempt hearings against Arpaio in late April, with Snow demanding production of all documentation from Montgomery which had been placed into Zullo’s and Arpaio’s custody.  Reacting to an article in the Phoenix New Times dated June 4, 2014, Snow is seeking to discover if Montgomery was attempting to produce evidence of collusion between Snow and the U.S. Department of Justice under Arpaio’s direction, as alleged in the article.

In May, Snow denied Montgomery’s motion to intervene in the case to protect his work product but granted an intervenor’s motion from the United States of America, which is represented by Justice Department attorneys.

Attorneys for the plaintiffs had issued several subpoenas for Zullo to produce the last 87 exhibits which he asked Arpaio’s attorneys to withhold from the court after discovering that they did not represent him. Zullo had previously understood, from statements made publicly by the attorneys, that they represented him because he had performed work at Arpaio’s request and under the auspices of the Maricopa County Sheriff’s Office.

Zullo is the only individual whose testimony has been requested by the plaintiffs who was not appointed a county-funded attorney.

Zullo wrote in both motions that his due process, Fourth, Fifth and Sixth Amendment rights were violated when he handed over all of the work product provided by Montgomery to Arpaio’s attorneys, believing that they were providing him with legal representation.

In his order on Friday, Snow stated that Zullo cannot invoke a Fifth Amendment right to avoid self-incrimination because he “voluntarily prepared the documents and voluntarily gave them to the attorneys.”  Snow said that Zullo was “under no compulsion” and that “as such, the Fifth Amendment does not apply. Moreover, even if he were in sole possession of the documents and the subpoena required him to produce them, he could not invoke the Fifth Amendment to resist the subpoena because he would hold the documents in a representative capacity for a collective entity, and the act of production would be that of the organization, not his own.”

Snow also claimed that “Documents that would be responsive to the Court’s subpoena are not Mr. Zullo’s personal documents but rather are documents created for the MCSO. Thus, even if Zullo himself were compelled to produce the documents, he ‘may not interpose a Fifth Amendment objection to the compelled production of [collective entity] records, even though the act of production may prove personally incriminating.’”

Zullo was deposed on October 23 but would not answer questions without an attorney present. To this writer’s knowledge, Zullo remains without representation and is scheduled to be deposed on Monday morning.

Snow has not denied the allegation made by an Arpaio constituent that he made disparaging remarks about Arpaio which were repeated by his wife to the constituent and indicated that Snow wished to see Arpaio replaced as Sheriff. While Arpaio’s attorneys requested Snow to recuse himself after the comments came to light and were not denied, Snow has remained on the case.

Arpaio and several deputies have testified that Montgomery was not investigating Snow or any of his family members, contrary to reports in the mainstream press.  Following Arpaio’s testimony on April 23 responsive to Snow’s questions about Montgomery’s work relative to himself, KTAR reported that “Sheriff Joe Arpaio admits to secretly investigating federal contempt judge’s family” when no such words appear in the court transcript.

Maricopa County representatives have not answered The Post & Email’s queries as to whether or not the county will pay for an attorney for Zullo.