ACCUSES ACLU OF “BLATANT HYPOCRISY” IN REGARD TO HIS CIVIL, CONSTITUTIONAL RIGHTS 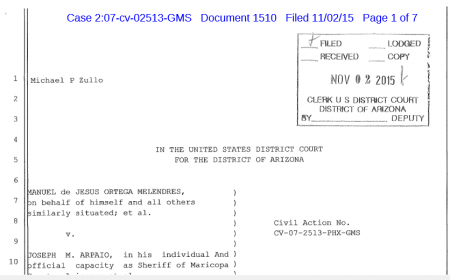 (Nov. 2, 2015) — Mike Zullo, who has become embroiled in a court-ordered investigation of a probe conducted by a confidential informant to the Maricopa County, AZ Sheriff’s Office, has filed a document pro se indicating that he is appealing the court’s order to provide “testimony and production of documents” relative to his interaction with the informant.

Zullo was assigned by Maricopa County Sheriff Joseph M. Arpaio to assist in the oversight of work performed for approximately 18 months by Dennis Montgomery, a former NSA and CIA contractor.

On Wednesday, Zullo filed a motion asking for more time to find his own counsel after attorneys representing Arpaio in a civil case who had appeared to also represent Zullo denied that they represent him.  Zullo had already turned over evidence subpoenaed by the court related to Montgomery’s work, which Zullo had assisted in supervising.

He also invoked his Fifth Amendment right to avoid self-incrimination and the concomitant right to withhold certain documentation resulting from Montgomery’s work.

The plaintiffs are represented by several attorneys from the large law firm Covington & Burling and the American Civil Liberties Union (ACLU), both of whom filed motions asking the judge to deny Zullo’s request for more time and contending that he should not expect Maricopa County to pay for any counsel he might choose to retain.

The ACLU states that it “works tirelessly in courts, legislatures, and communities to defend and preserve the Constitution’s promise of liberty for everyone in our country.”  The organization prominently features the Bill of Rights, which contains the first ten amendments to the U.S. Constitution, on its website.

In April 2014, the ABA Journal described a “revolving door” between C&B and the U.S. Department of Justice, whose former employees often migrate or return to to C&B after leaving public service.

Some, such as former Assistant Attorney General under Attorney General Eric H. Holder, Jr., as well as Holder himself, resumed employment at C&B after their time in government. A January 2012 Reuters report stated that Holder and Breuer “were partners for years at a Washington law firm [Covington & Burling] that represented a Who’s Who of big banks and other companies at the center of alleged foreclosure fraud” and that evidence existed of unprosecuted bank fraud while Holder and Breuer held their positions at the Justice Department.

Earlier this year, Snow allowed the U.S. Department of Justice to intervene in Melendres but denied a similar request from Montgomery on two occasions after Snow ordered Montgomery’s work product turned over to not only the court and plaintiffs’ attorneys, but also to the monitor Snow appointed to see that Arpaio’s office came into compliance with his orders aimed at upholding the constitutional rights of all Maricopa County residents.

The monitor was also the choice of the plaintiffs’ attorneys.

In March of this year, Arpaio admitted that he had allowed the searches identified in Melendres to continue in violation of Snow’s order, after which a civil contempt case arose, with hearings commencing the following month.

On April 23, Snow initiated an unexpected line of questioning regarding whether or not Montgomery’s work involved an investigation of his family members or him as alleged in a Phoenix New Times article published June 4, 2014 which Snow exhibited for all to see.

Arpaio’s testimony on April 23 indicated that Montgomery’s work did not involve an investigation of Snow, but rather, of Montgomery’s report that tens of thousands of bank accounts belonging to Maricopa County residents had been breached by a federal government entity.  Arpaio answered in the affirmative when Snow asked if his email account was one of a number reported to also have been breached.

In late September, Zullo was subpoenaed by the plaintiffs’ attorneys to give depositions beginning on October 7; however, he asked for an extension of time which was granted by Snow to October 23.

In a response to his filing last week, plaintiffs’ attorneys from Covington & Burling and the American Civil Liberties Union (ACLU) filed numerous documents stating that Zullo should not be permitted more time nor funding from the county to pay for representation.

In the seven-page document filed on Monday, Zullo accused the plaintiffs’ attorneys of denying him the right to counsel which has been provided to others in the MCSO and for which the ACLU has claimed to support in other cases.

The Phoenix New Times opposes Arpaio’s stance on illegal immigration and has characterized him as a criminal “focused on getting damaging intelligence on Snow.”  However, Det. Brian Mackiewicz testified last week that Snow was not a subject of Montgomery’s probe.

Zullo also cited reported comments of Judge G. Murray Snow’s wife indicating that her husband disliked Arpaio and wished to see that he lost the next election, which at the time was in 2012.  In early May, Arpaio’s attorneys filed a motion asking Snow to recuse himself from the case for conflict of interest, but Snow has remained on the case.  He has neither denied nor admitted that his wife made the comments to another restaurant patron in 2011.

On page 2 of Monday’s filing, Zullo indicated that he perceives that Arpaio’s defense attorneys misled him into believing that they represented him in his capacity as having performed requested work for the sheriff’s office.

On October 23, Zullo was deposed but told Covington & Burling attorney Stanley Young that he would not answer questions without counsel.  During the video-taped testimony, Young said that he also had been under the impression that Arpaio’s attorneys represented Zullo, who turned over approximately 3,500 emails and other pieces of evidence requested by the plaintiffs’ attorneys and ordered by Snow.

“One would think that the court, in the interests of justice in simple fairness, would be concerned that these lawyers have acted unethically and illegally, but this does not appear to be the case,” Zullo wrote on page 3.  He further contended that “in an active blatant hypocrisy, the ACLU of Utah celebrated the Sixth Amendment Center’s recent report which stated that ‘in Utah’s misdemeanor courts, defendants are often actually denied counsel when they are entitled to it, and in Utah’s felony courts, systemic deficiencies often lead to constructive denial of counsel.'”

In their objections to Zullo’s motion filed on Wednesday, Young and several ACLU attorneys appeared to accuse the MCSO, and Zullo, by extension, of criminal conduct in their claim that “the evidence indicates that Dennis Montgomery informed MCSO personnel–with Chief Deputy Sheridan’s knowledge–that he was using a database of information ‘harvested by the CIA and confiscated by him’ in his investigation, and also purported to be tracking telephone calls between the Court, the Attorney General, the Assistant Attorney General, and the U.S. Attorney for the District of Arizona.”

Plaintiffs’ attorneys additionally filed several memoranda issued by the MCSO authorizing Zullo’s travel expenses to oversee Montgomery’s progress to show that Zullo was working under the authority of the sheriff’s office. 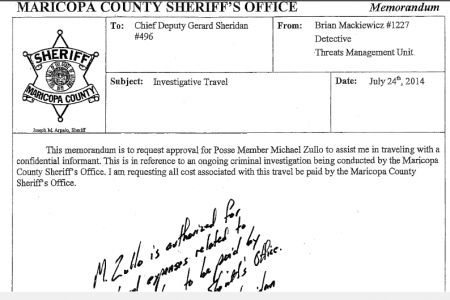 Another memo reflected Zullo’s response to a request by the plaintiffs’ attorneys for “financial documents” and other evidence that funds donated to the Maricopa County Cold Case Posse, of which Zullo has served as lead investigator in a particular investigation for more than four years, became “associated with the Seattle Investigation.” 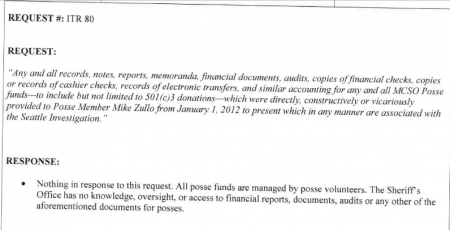 However, The Post & Email has learned from a source that the plaintiffs’ attorneys did not file with the court a memo which allegedly refutes that any investigation of Snow or his family members was ever requested or conducted during the duration of the Seattle project.