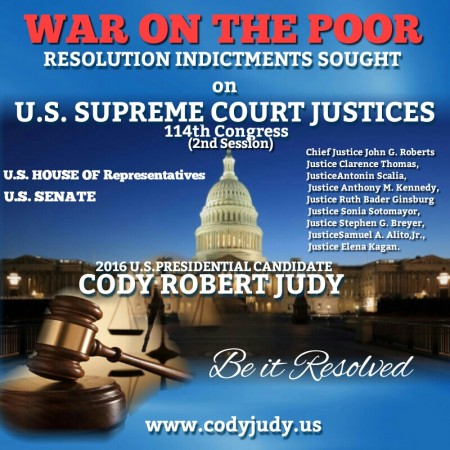 2016 U.S. Presidential Candidate Cody Robert Judy is asking both the U.S. House of Representatives and the U.S. Senate to pass RESOLUTIONS in their respective bodies that would indict all of the U.S. Supreme Court Justices in effect for what he pleads is effectively the worst case scenario on Justice For All – A WAR ON THE POOR.

The following RESOLUTION is being asked to be circulated by every Citizen upon his/her Representative and Senator as the General Public of CITIZENS OF THE UNITED STATES to every U.S. Senator and U.S. Representative in Congress for the Individual States.

It is the Duty of the Individual Citizens of every Particular State to Forward this to their ELECTED LEADERS as that is Who they were elected to Serve and more often then not the Elected Officials in your State will not take a Resolution Proposition from someone of a different State. It’s usually very easy E-Mailed if you Google your State U.S Representative and U.S. Senator.

CRJ WAR ON THE POOR RESOLUTION

WHEREAS : It is the U.S. Federal Law that [Justice For All] shall not be Prohibited from any United States Citizen on account of forma pauperis standing or condition of Poverty

WHEREAS: The Petitioner in the Case was not sanctioned OR dismissed by U.S. SUPREME COURT RULES 39.8

WHEREAS: TWO LOWER Court’s of Law in the Federal District Court (Utah Division) and Federal Tenth Circuit Court of Appeals have undertaken Proceedings GRANTING Cody Robert Judy (CRJ) a 2008,’12, and 2016 Candidate for the Office of President Forma Pauperis Standing in the Calendar Year JULY 2014-15

WHEREAS: Federal Statute honors a GRANTED Forma Pauperis Standing for a Calendar YEAR

WHEREAS: U.S.C. ARTICLE III Sect.I provides Judicial Powers vested in the U.S. Supreme Court and in inferior Courts as the Congress may from time to time ordain and establish.

WHEREAS: U.S.C ARTICLE III Sect. 1 states: The Judges, both of the supreme and inferior Courts, shall hold their Offices during [good Behaviour] and Sect 2 states: Law and Equity, arising under this Constitution, the Laws of the United States to all cases affecting [Citizens] thereof.

WHEREAS: Denial of ACCESS to any Federal Court established under the U.S. Constitution solely on the basis of Poverty can only be contrived as the WORST POSSIBLE CASE of JUSTICE in the United States of America under the banner and [Pledge of Allegiance] in JUSTICE For All constituting BAD BEHAVIOUR

War on the Poor Explodes in Congress added on Monday, October 19, 2015