PRESIDENTIAL CANDIDATE CALLS RULING “DARK DAY” FOR “JUSTICE FOR ALL” 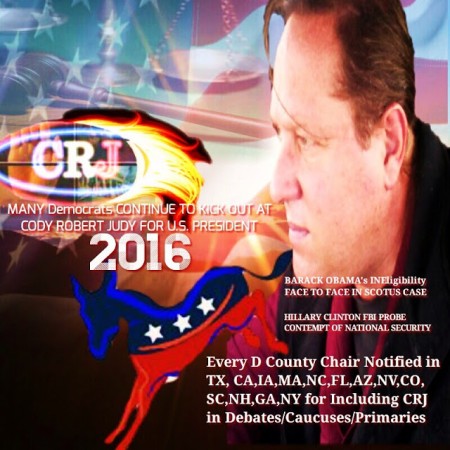 The decision was published in an “Orders List” containing a number of cases.  Last week in an interview, Judy told The Post & Email that a clerk at the U.S. Supreme Court informed him that a sizable number of decisions was expected to be issued on October 5.

The status of in forma pauperis concerns a person’s ability to pay the customary filing and mailing fees, which can run into the thousands of dollars.

In response to the ruling, Judy wrote on Facebook, “U.S. SUPREME COURT refuses to grant forma pauperis status in Judy v. Obama14-9396 in spite of verified bank statements. Dark Day in “Justice for All”.

Judy had filed suit against Barack Obama, Rep. Nancy Pelosi and the Democratic National Committee (DNC) for having run Obama as an ineligible candidate for president in both 2008 and 2012, when Judy was a also a declared presidential candidate.  Judy maintains that Obama is ineligible to serve as president in accordance with the “natural born Citizen” clause in Article II, Section 1, clause 5 of the U.S. Constitution by virtue of his foreign-citizen father and questionable birth on U.S. soil.

The case claims that the DNC and Obama violated the Sherman Act, which was intended to prevent monopolies from preventing “free trade or services,” according to Judy, who was seeking financial compensation for the alleged damage to his presidential campaign.

Obama claims a birth in Honolulu, HI on August 4, 1961, but the long-form birth certificate image posted on the White House as purported proof has been declared a “computer-generated forgery” by a law enforcement investigation, as has his Selective Service registration form.

The Supreme Court held a conference on Judy’s case on June 18, subsequently denying his petition for in forma pauperis status despite a ruling by the Tenth Circuit Court of Appeals, from which the case had been appealed, approving.

A second conference to reconsider Judy’s petition was scheduled for September 28, resulting in today’s ruling.

In 2008, Judy challenged the constitutional eligibility of both Sen. John McCain, who was born in Panama to two U.S.-citizen parents as well as Obama.

Neither Congress nor the courts have been willing to investigate Obama’s background to determine whether or not he is eligible to hold the office he currently occupies.  In 2011, the Ninth Circuit Court of Appeals ruled that a person seeking the same office could challenge the eligibility of another candidate during the campaign period.