My Trip to Birmingham pb

“UNITY MARCH” BRINGS TOGETHER 30,000 FROM AROUND THE WORLD 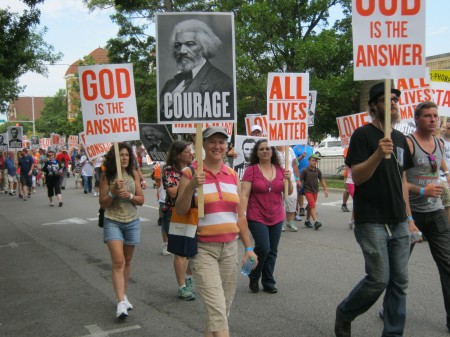 (Sep. 13, 2015) — I was only an infant when Martin Luther King, Jr., marched in Birmingham, AL.  Many times over the years I have said, “If I were older, I would have marched with MLK.”  From the moment I learned there would be a Restoring Unity/All Lives Matter march in Birmingham, I wanted to go.

On August 29, 2015, my wife and I joined 30,000 people from around the world.  Among the leaders were Alveda King, MLK’s niece; Clarence Henderson, one of the young men who participated in the sit-in at Woolworth’s lunch counter; and Jim Lowe, who was eleven and present at the 16th Street Baptist Church when the bomb exploded.  Bishop Lowe, now pastor of the Guiding Light Church, hosted the event.

I gained a greater appreciation for our civil rights history while touring Birmingham.  I visited the 16th Street Baptist Church where a bomb killed four young girls.  I saw images of a brick-shattered window and a burning cross.  I walked where guard dogs terrorized peaceful citizens and stood where high-pressure water cannons soaked innocent schoolchildren.

Martin Luther King, Jr. arrived in Birmingham during the spring of 1963.  In the midst of these violent acts of injustice, the driving force behind MLK’s message, however, was not revenge.  “Was not Jesus an extremist for love: ‘Love your enemies, bless them that curse you, do good to them that hate you, and pray for them which despitefully use you, and persecute you.'”   Martin Luther King, Jr., Letter from Birmingham Jail, April 16, 1963

With a message of love and non-violence, MLK marched for all Americans, not just Blacks.  “… I am in Birmingham because injustice is here…  I cannot sit idly in Atlanta and not be concerned about what happens in Birmingham.  Injustice anywhere is a threat to justice everywhere…  Whatever affects one directly, affects all indirectly.”   Martin Luther King, Jr., Letter from Birmingham Jail, April 16, 1963

In addition, MLK did not consider this a new movement.  MLK, and thousands of Black Americans, were another courageous echo in America’s struggle for Freedom. “We will reach the goal of freedom in Birmingham and all over the nation, because the goal of America is freedom…  We will win our freedom because the sacred heritage of our nation and the eternal will of God are embodied in our echoing demands…”  Martin Luther King, Jr., Letter from Birmingham Jail, April 16, 1963

I did not get much sleep in Birmingham.  I returned to the hotel room each evening and laid there in awe.  A few days after returning home, I spoke by phone to a member of the Guiding Light Church.  She said the participants were very kind and the Spirit of the Lord was everywhere.  She said now that everyone had left, there was a void in the city.  I could not agree more.  For me, the residents of Birmingham were also very kind.  Their love and gratitude were unmistakable and I miss them, too. 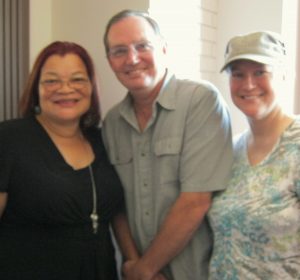 ——————————————-
“But as it has been a kind of destiny, that has thrown me upon this service, I shall hope that my undertaking it is designed to answer some good purpose.”  George Washington, Letter to Martha Washington, June 18, 1775

“Should we wander from [The Founding Principles]… let us hasten to retrace our steps and to regain the road which alone leads to peace, liberty, and safety.”  Thomas Jefferson, First Inaugural Address, March 4, 1801

My Trip to Birmingham pb added on Sunday, September 13, 2015