WHY ARE INMATES FORCED TO TAKE CLASSES? 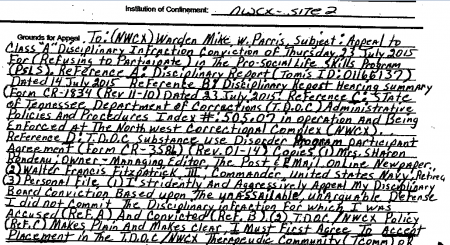 (Sep. 12, 2015) — On September 3, The Post & Email received documentation from TDOC inmate Jerome L. Johnson indicating that he was appealing a grievance against NWCX Warden Mike Parris and several staff members for issuing him a disciplinary “write-up” for his refusal to participate in the Pro-Social Life Skills (PSLS) course.

Johnson sent his appeal to TDOC Commissioner Derrick Schofield, who has been criticized for changing corrections officers’ work schedules to save money, “lying,” and allegedly threatening prison wardens with termination should they approach their state legislators about problems within the system.  Schofield has headed the TDOC since 2011 and is rumored to be considering resigning.

Prison literature states that inmates are “encouraged” to participate in courses which will be of benefit but not that they will be forced against their will.

In June, Johnson’s fellow inmate, Walter Francis Fitzpatrick, III, also refused to take part in the PSLS class and was threatened with physical injury and a similar write-up.  Ultimately, the write-up was not pursued, and Fitzpatrick was released from the class after reporting that instructor Terry Hopper had backed him into a corner and threatened to “beat you to the middle of next week” if he did not participate.

According to a form included in Johnson’s appeal, an inmate may decline to take part in the Pro Social Life Skills course, which is designed to assist individuals with drug and alcohol addiction to reject the patterns of behavior which led to their incarceration.

Both Fitzpatrick and Johnson believed that by taking the class and answering the PSLS workbook questions, they would incriminate themselves, thereby jeopardizing their respective appeals.

Both men maintain their innocence.  Johnson is expecting a post-conviction hearing in the near future and has filed an appeal through his attorney, Gregory David Allen.

The Post & Email is in possession of a complete set of PSLS workbooks which state on every page that the material is copyrighted and cannot be reproduced without written permission.

The books are published by “The Change Companies” whose mission it is to “to inspire and guide individuals to make choices each day that lead to healthier and happier lives.”

The first page of the workbook entitled “Peer Relationships” begins:

This Interactive Journal is designed to help you in your self-change. It is not intended to entrap you in any way or to be used against you.

On page 14, under the heading “Making Daily Choices,” the second question of three in a bulleted list asks, “Can you go to the old neighborhood and say “no” to your old running buddies?”

The third question reads, “Can you be around old acquaintances who still use drugs?”

Another book, entitled “Criminal Lifestyles,” contains the heading on page 2 of “Looking at the payoffs of your criminal behavior.” The third paragraph under the heading reads, “In order to move your life forward in a rational way, it is important to understand which payoffs were motivators in your past criminal lifestyle and which payoffs are still keeping you interested in criminal activities.” The participant is then asked to fill in blank ovals with past “motivators” grouped with ovals containing items including “financial security,” “social status,” and “money for drugs,” among others.

On page 4 of the same workbook, a vertical list appears with bulleted items including “Luxury cars,” “Feeling of power,” “Financial security,” and other entries totaling 11. The instructions at the top of the page read:

Look at the payoffs below. In the first column, put a [checkmark] by those that motivated you to lead a criminal lifestyle…

The fourth workbook is titled “Rational Thinking” and totals 64 pages.

The fifth and final book in the series, “Skills for Successful Living,” contains the same paragraph on the first page as the “Peer Relationships” workbook. “Successful Living” covers such topics as “employment barriers,” “Managing your finances,” “Goal-setting” and “Your physical health.”

A paragraph on the back of the book states:

Last month, The Post & Email offered this exclusive information to a Tennessee mainstream media outlet in the context of the “prisoners-for-profit” operation of which Fitzpatrick informed us in late May. Two reporters at the outlet initially indicated interest, submitted to us a list of follow-up questions and request for documentation, to which we responded fully, after which the two went dark.

Fitzpatrick reported that for every participant enrolled in the PSLS course, the federal government is billed up to $3,000. Some participants have taken the course previously, while others may not be suitable for it.

Tennessee media have additionally refused to investigate the many claims of judicial misconduct and violations of law reported by defendants and their family members throughout the state. Six years ago, Fitzpatrick discovered that Tennessee’s county grand juries are led by judicially-appointed foremen which do not come from the jury pool, a practice sanctioned by the state legislature in 1919.

While the law was repealed in 1979, criminal court judges continue to hand-pick the grand jury foreman and retain him or her for as long as they wish, sometimes for decades.

In some counties, the foreman votes with the 12 grand jurors, while in others, he or she reportedly carries out only administrative duties. The state of Tennessee has said that the foreman is both a juror and not a juror, depending on the situation.

The legitimacy of each grand jury indictment issued by such assemblies is therefore in question in every instance.

Last month, Johnson first appealed his write-up to Parris, who upheld the punishment of ten days in “the Hole,” which is solitary confinement; a $5.00 fine; loss of some privileges and his job working in the prison kitchen. Johnson maintains that he is the victim of racial discrimination since Fitzpatrick, who is white, had his disciplinary write-up for the same alleged infraction dismissed, while Johnson, who is black, has had his charge upheld. In late July, he filed a Title VI civil rights complaint with the U.S. Department of Justice.

In the wake of two hearings conducted by two legislative subcommittees last month at which both former and current Tennessee correctional institution personnel attested to unsafe working conditions, failure to file proper assault reports, and a serious shortage of corrections officers, The Post & Email contacted the four legislators who chaired the August 27 hearing, on August 31:

Hello, I am contacting you with information I believe is pertinent to the TDOC audit to be conducted next month by the ACA.

Over the last year, I have been in touch with a number of inmates at various Tennessee prisons who have attested in detail to staffing shortages, violence within their respective facilities, and another item of which you may not be aware.

That item is a prisoners-for-profit operation being conducted within the Northwest Correctional Complex (NWCX), and perhaps other locations, which uses inmates as sources of revenue by forcing them to participate in classes they have already had, are exempt from taking as per the Administrative Policies and Procedures manual, or which they are unable to complete due to disability.

I have complete documentation of such claims from at least three inmates at NWCX, one of whom was threatened by a course instructor with physical harm if he continued to refuse to participate in the class. Moreover, the inmate was told during his intake process that he did not qualify for any educational component offered by the TDOC. I informed Communications Director Neysa Taylor of the threat report but received no response from her. However, it is published on my news website.

The prison receives up to $3,000 per class participant for the Pro-Social Life Skills course, hence the motivation to enroll as many inmates as possible, whether or not they would benefit from it. I have a report that one inmate was taking it this past spring for the fourth time.

In one case, a man who has repeatedly asked for an exemption from Adult Basic Education because of his age (62 or over), in accordance with the policy manual, has been stonewalled and forced to participate anyway. Additionally, he possesses a Bachelor’s degree, Master’s degree and is a graduate of the United States Naval Academy; thus it makes no sense for him to be enrolled in ABE. He was told over two months ago that the prison would verify proof of his high school graduation, but since he was prevented from signing the Release of Information form, it has most likely gone nowhere.

In another case, a man with a learning disability has been forced to sit in the ABE class for the last two years, despite his inability to pass the TABE in order to obtain a GED. While this man has a background in building and maintenance and possesses several vocational certificates, NWCX staff will not allow him to take part in a vocational program within the prison.

I have also followed the case of a seriously ill inmate who may die in custody if he does not receive outside medical care soon. Another has related that he was beaten by gang members last year.

I have written to both Warden Mike Parris and Commissioner Derrick Schofield on some of these matters but have received no response from either one. I sent a letter to Gov. Haslam about it, including pertinent documentation, this morning.

I would be happy to speak with you by telephone, conference call, or by email regarding the evidence I have of the aforementioned scheme which is bilking the federal treasury to which we all contribute.

We received no response from any of the legislators.