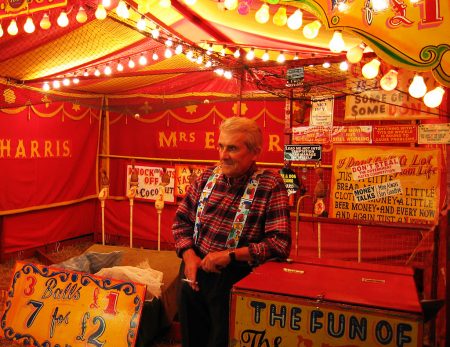 (Jul. 31, 2015) — “Good evening, ladies and gentlemen. As you can see, tonight’s episode is taking place in ‘Madam Shylock’s’ fortune-teller tent, right here on the midway of the carnival that came to town yesterday.”

“It’s why you’re here, isn’t it? To find out who’s going to win the election. Well, I just told you. Now, if the Americans were smart – they’re not, but if they were – they’d vote for Carly Fiorina because she’s, by far, the smartest of the whole lot of them put together. But Trump will do. Ben Carson would be in charge of getting rid of Obamacare.

“Doesn’t anyone read history anymore? Quiet: it was a rhetorical question. This has all happened before, in 1930’s Germany. You think Obama is going to just step down and go off into the sunset? Think ‘Hitler.’ Think ‘Gestapo.’ Think Department of Homeland Security allowing millions of Muslims in. Think Death Camps. Think. (Madam reaches under the table and slams a cane down on top of it.) THINK!”

“Gee, lady, hold your horses. This is a family show and we’re on live television. Little kiddies are watching and you’re talking Concentration Camps? Ovens?”

“‘Honor killings’ (premeditated murder!); beheadings; pushed off tall buildings and hung from street and traffic lights. Open your eyes, sonny boy. Put some blackface on and Hillary is just Obama in drag. With the same bureaucrats in power; same unions (who followed the de facto president Obama into the ‘Land of Socialism’), nothing will improve, only get worse. Freedoms eroding while Creeping Sharia ever so inexorably smothers the Constitution until every copy of it has been hunted down and burned to a crisp.

“Lady! How about lightening up a little bit.”

“When? Before we’re ordered to the cattle cars, or before we’re marched into the showers? Your pick. Choose. Now. What, cat got your tongue?”

“Okay, so we go along with what you say. Why does Trump take the cake?”

“Simple: he’s not one of them. It’s the ‘them’ that got us where we are: $18+ trillion in debt, for goodness sake. Millions of illegal immigrants and Muslims in our country collecting freebies while they go around raping, killing and stealing. Not all, but ONE is one too many. Ft. Hood (‘Allahu Akbar!’) and we still allow Muslims in our military?

“Want the truth? You men, even you, Mr. Roving Reporter, aren’t doing your fair share of protecting the women of our country. Obama and Hillary don’t give a damn, but you men of America can’t run away from this one. That girl that was gunned down in San Francisco the other week, remember her? You killed her, Mr. High-and-Mighty Roving Reporter, and all you Big-Brave men watching the show. Where were you while this young lady was being murdered?

“Oh, you were in New York, or Chicago, or St. Louis, or El Cajon, Downers Grove, Lake Worth? So you’re not responsible? Let me make it as simple and plain as possible: you all, all of you, let that poor girl down. You government employees supporting a president who hasn’t even ever been vetted let that poor girl down, and every girl who has been punched, raped and murdered by someone who shouldn’t be in our country. This sorry Administration has refused to kick out illegal immigrants and Muslims who have been killing our women and military people. A vote for Hillary: you not only get more of the same, but you’ll get a lot more of the same.

“A vote for Hillary is just the same as murdering a woman and someone, anyone, in our military, and a pedophile destroying a life, because she’ll just prolong Obama’s agony on the US. And I’m not even going to talk about the Federal Reserve stealing your money and the United Nations stealing your freedoms.

“Trump is the hope. Why, he reminds me of OPOVV and his running mate, Larry Meyer, two guys who ran for president and VP, respectively. They said, back in 2012, that they would take no money; no vacations; no perks: just elect them and let them do the job which must be done. And now Trump has come along and picked up their banner, and I hope you people have enough brains to know that you don’t really have a choice in this matter.

“I see your sound lady signaling that we’ve only a minute left, so let me give you a financial tip: for this Halloween, invest in little chalk boards, because my psyche tells me that Karl Rove will be the joke of the season.

“Here’s some advice: don’t procrastinate: support Trump by actually voting for him. But don’t turn your back on Fiorina. Thank you for visiting.”

“And thank you, Madam Shylock, for being so forthright with us this evening.

“Well, that’s our show for tonight. I’m glad you saw it and I guess we all learned something: us menfolk are responsible for the women in our country. If memory serves me well, that presidential candidate for 2012, OPOVV, one of his campaign promises was to require every woman in America to be armed with a lightweight .357 Magnum revolver; now there’s a thought to contemplate. This is your Roving Reporter saying goodnight. Goodnight.”

One Response to "The Procrastinators (RR)"