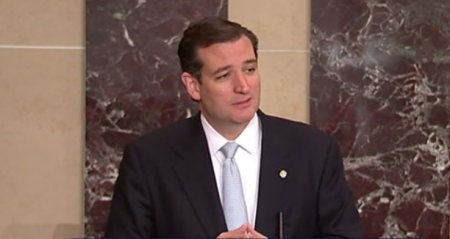 (Jul. 20, 2015) — In March 24, 2015, The Post & Email submitted a FOIA request to the Selective Service System for the registration forms presumably completed by Sen. Rafael Edward “Ted” Cruz,, who declared himself a 2016 presidential candidate one day prior to our request.

Article II, Section 1, clause 5 of the U.S. Constitution stipulates that the president and commander-in-chief be a “natural born Citizen.”  While disagreement remains as to the exact meaning of the term as intended by the Founders, a letter written by John Jay on July 25, 1787 to George Washington, a key figure in advocating for the replacement of the Articles of Confederation, indicated that undivided allegiance was of paramount importance in the nation’s chief executive.

No historical evidence exists that there was any debate about the inclusion of the term as suggested by Jay.

Some constitutional scholars believe that “natural born Citizen” encompasses a person’s birth on U.S. soil to parents who were U.S. citizens at the time of the birth. Others have opined that having been born to one U.S.-citizen parent anywhere in the world is sufficient to qualify, while still others insist that a simple birth on U.S. soil, regardless of the citizenship of the parents, fulfills the requirement.

Until just before Cruz declared himself a candidate, it was generally accepted that a foreign-born person could not be president, including by Fox News.

Cruz was born in Calgary, Alberta, Canada on December 22, 1970, reportedly to a U.S.-citizen mother and Cuban-citizen father.  Cruz’s parents were in Canada pursuing business in the oil industry, during which his father, Rafael Bienvenido Cruz, obtained Canadian citizenship.

It has been suggested, but not proved, that Cruz’s mother also obtained Canadian citizenship while there, raising questions as to whether or not Cruz possesses any type of U.S. citizenship.  He renounced his Canadian citizenship, which his spokeswoman originally said he did not have, in May 2014.

In 2008, on his “FighttheSmears” website, Obama claimed dual citizenship with the U.S. and Kenya, which raised no such media speculation.

Because the mainstream media would not, thousands of citizens asked if Obama were eligible for the presidency among reports in both African and U.S. media that Obama was born in Kenya or Indonesia.

Attorney Leo Donofrio contended that Obama was ineligible for the office based solely on his claimed foreign-citizen father, who reportedly attended the University of Hawaii as a foreign student and never became a U.S. citizen.

The U.S. Supreme Court refused to schedule oral argument on any of the numerous cases which challenged Obama’s constitutional eligibility to serve beginning in 2008.

In the same 2013 report, The Dallas Morning News showed an image of Cruz’s birth certificate which it said it obtained from him exclusively.

The Post & Email attempted to obtain a certified copy of Cruz’s birth record from the Province of Alberta’s Vital Statistics division but was refused on the basis that we did not have a direct interest in the record.

However, we were more successful in obtaining documents from the Selective Service System, which included a letter signed by Richard Flavahan, the same agent who vouched for Barack Hussein Obama’s purported Selective Service registration form which has since been declared fraudulent by a law enforcement investigation launched in September 2011.

On national television, Obama had claimed in September 2008 that “I had to sign up for Selective Service (SS) when I graduated from high school … And I actually always thought of the military as an ennobling and, you know, honorable option. But keep in mind that I graduated in 1979. The Vietnam War had come to an end. We weren’t engaged in active military conflict at that point. And so, it’s not an option that I ever decided to pursue.”

On March 3, 2010, Linda Bentley of The Sonoran News expounded on early findings of blogger and attorney Debbie Schlussel, who reported that a FOIA request submitted by Stephen Coffman for Obama’s Selective Service forms was backdated to September 9, 2008, approximately five weeks before he made his request.  Subsequently, other FOIA requesters received a printout sheet which differed from Coffman’s and contained a more recent “last action date.”

On March 1, 2012, Maricopa County Cold Case Posse lead investigator Mike Zullo and Sheriff Joseph M. Arpaio gave a press conference in which they declared Obama’s Selective Service registration form, along with the long-form birth certificate image posted on the White House website on April 27, 2011, to be “computer-generated forgeries.”  In an interview with radio host and Pastor Carl Gallups on July 10, Zullo, who has granted few interviews since late 2013 but has continued the investigation, indicated that an immense amount of fraud was perpetrated to maintain Obama in the White House.

When clicking on a link on Monday afternoon to a Selective Service System web page which had contained Flavahan’s official title and contact information, the following message appears:

“The resource you are looking for has been removed, had its name changed, or is temporarily unavailable.”

At 1:36 p.m. EDT, The Post & Email telephoned the Selective Service System at 703-605-4100 to inquire as to whether or not Flavahan is still employed there.  We received a greeting stating that all agents were “busy with other callers” but which instructed us to leave a message.  However, another greeting then stated that the voice message box was full.

Today, male dual citizens of the U.S. and another country are required to register with the Selective Service.

“Because Mr. Cruz was born after 1960, his record is in our possession; a copy of his automated record is enclosed,” Flavahan wrote in his cover letter to us dated April 13, 2015. “Firstly, there is no registration form because Mr. Cruz was registered from a Pell Grant Application Form provided by the U.S. Department of Education.  Secondly, he is registered with us effective April 18, 1989, and was assigned Selective Service Number 70-16668881-9. Thirdly, Mr. Cruz has satisfied the Federal registration requirement as mandated under the Military Selective Service Act. And finally, he was never subject to induction into military service because the draft ended in 1973 and was not since reinstated.”

On April 29, The Post & Email subsequently submitted a FOIA request to the U.S. Department of Education for documents containing the search terms “Rafael Edward ‘Ted’ Cruz” or any variant thereof.  We requested and were granted a fee waiver based on our status as a media outlet.

We then received the following “FOIA Request Information Sheet” and “FOIA Report:”

which contained nothing signed by Cruz.

On June 25, we submitted a second request to the DOE to clarify:

Good morning, I am contacting you here at the suggestion of Elizabeth Hunziker, who was handling a previous FOIA request made to the Department of Education.

My FOIA request is as follows:

Any and all applications for financial aid submitted to the U.S. Department of Education between 1987 and 1995 signed by Rafael Edward Cruz or variants thereof, which may include “Rafael ‘Ted’ Cruz,” “Ted Cruz,” or “Rafael E. Cruz.”

The applicant is now a declared presidential candidate and was born on December 22, 1970, in Calgary, Alberta, Canada.

Ms. Hunziker previously waived customary FOIA fees because the documentation, if it exists, will be published to inform the American electorate further about a 2016 presidential candidate.

Later the same day, we received a letter titled by the DOE as “Rondeau Perjury Cert Req Letter” along with a form we were asked to sign.

We declined to sign the form because a signature indicates that “I declare under penalty of perjury under the laws of the United States of America that the foregoing is true and correct, and that I am the subject named above or the parent or guardian of the minor subject named above. I understand that any falsification of this statement is punishable under the provisions of 18 U.S.C. Section 1001 by a fine under that title or by imprisonment of not more than five years or both, and that requesting or obtaining any record(s) under false pretenses is punishable under the provisions of 5 U.S.C. Section 552a(i)(3) by a fine of not more than $5,000.”

On July 16, we received a final response from the Department of Education stating, in part:

On June 22, 2015, the Department provided 2 pages of fully releasable documents responsive to you request.

Provisions of the FOIA allow us to recover the costs pertaining to your request. The Department has concluded that you fall within the category of “news media/an educational/scientific use requester.” However, the Department has provided you with this information at no charge. The Department’s release of this information at no cost does not constitute the grant of a fee waiver, and does not infer or imply that you will be granted a fee waiver for future requests made under FOIA to the Department. Because we were able to locate and process these documents at minimal costs, they are provided to you at no cost…

Obama has also not released his financial aid applications despite a $50 million offer to go to a charity of Obama’s choice from now-presidential candidate Donald Trump made just before the 2012 election.

One Response to "U.S. Department of Education Will Not Release Ted Cruz’s Financial Aid Applications"