“AUTHENTICITY AND TRUTH AND PRINCIPLE” 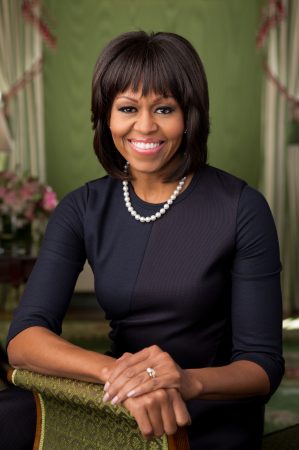 (Jul. 17, 2015) — In late 2007, Peter Slevin, then of The Washington Post, quoted Michelle Obama as having said at a campaign event in Iowa that “an initial skepticism is natural” in reference to her husband’s presidential candidacy announced in February of that year.

Slevin described Barack Obama as a “brainy black man” who could become the 44th President of the United States.  The article appeared in the Rockford (IL) Register Star on December 2, 2007 under the title, “Obama’s Her Man, But She’s Own Woman.” On November 27, The Washington Post published it under the headline, “Her Heart’s in the Race.”

Earlier this year, Slevin authored a book about the current First Lady titled, “Michelle Obama:  A Life,” reportedly without interviewing her for the project.  Amazon’s book introduction states that Slevin employed “disciplined reporting and a storyteller’s eye for revealing detail” in writing the work. “The journey winds from the intricacies of her upbringing as the highly focused daughter of a gregarious city water-plant worker afflicted with multiple sclerosis to the tribulations she faces at Princeton University and Harvard Law School during the racially charged 1980s. And then returning to Chicago, where she works in an elite law firm and meets a law student from Hawaii named Barack Obama. Unsatisfied by corporate law, Michelle embarks on a search for meaningful work that takes her back to the community of her South Side youth, even as she struggles to find balance as a mother and a professional—while married to a man who wants to be president,” the second paragraph of the intro reads.

Slevin believes that Michelle has been the object of particular “vitriol” while serving as First Lady.  In an interview with NBC News, he remarked, “I think part of the vitriol is about what a polarized country we are now.  It’s not just about Michelle Obama but I also think that part of it is that a lot of people in this country don’t know, as Gwen Ifill has pointed out, how to or what to think about an outspoken, accomplished African American woman. And I think that it is unquestionable that some of it is about race and I say race but of course I mean racism.”

Gwen Ifill is a long-time reporter for PBS.

According to Barack Obama, he is equally white and black, reportedly having been born to a white American mother and Kenyan father.  His life narrative does not identify him as having descended from slaves.

In his 1995 book, Dreams From My Father, Obama self-identifies with the black community and wrote that he was mentored as a child by both his white grandparents and black communist writer Frank Marshall Davis.

During her campaign appearance, Michelle is quoted as having said of her husband after their first meeting at her Chicago law firm, “He grew up in Hawaii!  Who grows up in Hawaii?”

Slevin reported that while performing community work and seeing Barack “one summer afternoon in a sweltering church basement in one of Chicago’s poorest neighborhoods,” Michelle said of her future husband, “What I saw in him on that day was authenticity and truth and principle.  That’s who I fell in love with, that man.”

On June 12, 2008, The Daily KOS released an image purported to be Barack Obama’s birth certificate from the Hawaii Department of Health (HDOH) in response to speculation that he did not meet the eligibility criteria to serve as president of the United States.  Article II, Section 1, clause 5 of  the U.S. Constitution contains three requirements for the chief executive: that he be 35 years of age or older; that he have resided in the country at least 14 years; and that he be a “natural born Citizen.”

While the term “natural born Citizen” is not defined in our founding documents, many believe it to have signified that the person must have undivided loyalty to the United States.  While some scholars believe a person may be born on foreign soil to U.S.-citizen parents and qualify, others contend that the parents must have been U.S. citizens and the child’s birth have occurred within the United States.  Yet others have argued that a simple birth on U.S. soil, regardless of the citizenship of the parents, is sufficient to qualify.

Article I of the Constitution states that U.S. Senators and Representatives be “a Citizen” with a seven-year or nine-year respective residency requirement.   U.S. Representatives must be at least 25 years old and U.S. Senators at least 30 years old.  Therefore, the Founders differentiated between the citizenship, residency and age requirements of members of Congress and the president.

The birth certificate image posted by KOS contained a blacked-out number with a disclaimer at the bottom which reads, “ANY ALTERATIONS INVALIDATE THIS CERTIFICATE.”  The White House later released what appears to be the same image in a different color scheme.

In May 2009, then-White House Press Secretary Robert Gibbs claimed that the “birth certificate” released “on the internet” was an official document from the HDOH obtained by the 2008 Obama campaign and that it was the only document available proving Obama’s claimed birth in Hawaii.

In early 2011, businessman Donald Trump, now a presidential candidate, had been considering a run for the presidency and vocally challenged Obama’s eligibility to serve by questioning his birthplace.  Trump stridently called for the release of Obama’s “long-form” birth certificate which would have contained the name of the doctor who delivered him, the hospital where he was born, the mother’s signature, and other details not found on the short-form, or composite, released by KOS.  On April 27, 2011, the White House appeared to respond by releasing an image purported to be the “long-form birth certificate” obtained by Obama’s personal attorney on a special trip to Hawaii just days before.

The only reporter who claimed to have been provided a paper copy of the long-form birth certificate was NBC’s Savannah Guthrie, who claimed on air that the document contained a raised seal.  Guthrie’s counterpart at the time, Ron Allen, held a paper in his hand purported to be a copy of the document as he attempted to gauge Trump’s reaction just after the White House released it online.

After its publication, Trump held a press conference during which he stated that his team would examine the image to determine whether or not it was authentic.  Just before the 2012 election, Trump subsequently challenged Obama to release his passport and college applications in exchange for a $50 million donation to a charity of Obama’s choice.

Obama never responded to the challenge.  At an event at the National Press Club in May 2014, Trump stated that he did not regret challenging Obama’s credentials and offered a dual-pronged theory that Obama either held foreign citizenship when applying for college financial aid or that he is U.S.-born but falsely stated that he held foreign citizenship for the same purpose.

After Breitbart revealed the discovery in May 2012, the agent explained by stating that the company’s misstatement stemmed from a “fact checking error.”

No hospital in Hawaii, including Kapiolani Medical Center, which Obama has identified as “the place of my birth,” has confirmed Obama’s claim.  He was termed “an immigrant” by former New Mexico Governor Bill Richardson in 2008.

Former governor of Hawaii Neil Abercrombie has stated publicly that he knew Obama’s parents when they were attending the University of Hawaii together during the early 1960s and that he met Obama with the proud couple as an infant.  Just after his 2010 election, Abercrombie resolved to locate Obama’s detailed birth certificate at the HDOH but several days later abandoned the search.

In October 2009, in contrast to Abercrombie’s claims, Michelle Obama stated publicly that Obama’s mother was “very young and very single” when Barack was born. Michelle also described Kenya as her husband’s “home country” during a 2008 campaign speech.

In September 2011, the Maricopa County, AZ Cold Case Posse launched an investigation into the long-form birth certificate image at the request of the county sheriff, Joseph M. Arpaio.  Following six months of analysis, Arpaio and lead investigator Mike Zullo stated at a formal press conference that the posse had found that both the long-form birth certificate and Obama’s purported Selective Service registration form are “computer-generated forgeries.”

A document expert utilized by law firm Perkins Coie, a defender of Obama’s claimed eligibility in response to numerous lawsuits, prepared a report for the posse which affirmed that in his professional opinion, the long-form image is “a complete fabrication and a 100% forgery.”   In June 2013, Zullo identified document analyst Reed Hayes as possessing “impressive credentials.”

Radio host and pastor Carl Gallups, who has followed the posse’s work closely and interviewed Zullo as recently as last Friday, has predicted that Obama will be revealed as constitutionally ineligible to serve when the truth about his background emerges.  In last week’s interview, Zullo said that he has continued the now-four-year-old investigation from the resolve that the level of deception used to elevate Obama to the White House never again be employed against the American people.

“…authenticity and truth and principle…”

Is Michelle Obama Married to a Phantom? added on Friday, July 17, 2015

3 Responses to "Is Michelle Obama Married to a Phantom?"