WHY HAS OBAMA FAILED TO FILE A RESPONSE IN THREE INSTANCES? 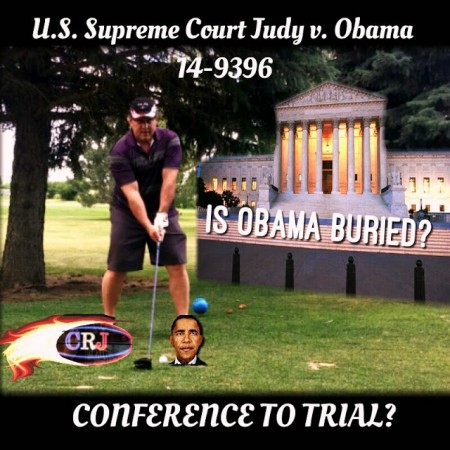 (Jun. 13, 2015) — It is probably the most [a]cidic and [o]dd circumstances used as tactics upon the United States Supreme Court ever devised by the Respondents, to completely fail to respond, but that is what is being done by Barack Hussein Obama in the highly controversial case Judy v. Obama 14-9396 set for Conference in the U.S. Supreme Court just six days from now. What remains to be seen is if the ‘Triple Bogie’ for Obama is seen as Par for the U.S. Supreme Court, and that Par is good enough.

The Rules are verily simple that after a Cert is filed, a response is due 30 days afterwards. A brief in opposition, sometimes colloquially referred to as a “cert opp,” must be filed within 30 days, Sup. Ct. R. 15.2., and Obama failed to do so, hooking his T shot far to the left and landing in another fairway entirely.

If a respondent decides to forgo its right to file a brief in opposition, the Court’s waiver form, which also serves as an entry of appearance for the respondent’s counsel of record, should be submitted within the time allowed for filing a brief in opposition. Although filing a waiver is not mandatory, a respondent who does not plan to submit a cert opp should file the waiver form, which is available on the Court’s website. See Waiver, Supreme Court of the United States, http://www.supremecourt.gov/casehand/waiver.pdf . This is Obama’s second shot on a Par 5 that lands him in the sand trap.

While filing a Waiver is not Mandatory, even that does require a signature, and the Court in Judy v. Obama 14-9396 does not have one. This is the ball hit out of the sand trap hitting the opposing wall of the sand trap and rolling back to the feet of Obama now three strokes behind and headed for that triple bogie.

HOW TO APPOSE A CERT POSITION
[The alternative—waiting to see whether, based on review of the petition and any supporting amicus briefs, one or more Justices are interested enough to require a response—may place a respondent at a disadvantage. See id. at 256.

By opposing a petition at the outset, a respondent eliminates the risk that one or more members of the Court may form a subjective opinion leaning toward granting certiorari before considering the respondent’s point of view. Chief Justice Rehnquist once said that:

“[w]hether or not to vote to grant certiorari strikes me as a rather subjective decision, made up in part of intuition and in part of legal judgment.” — William H. Rehnquist, The Supreme Court, How It Was, How It Is, 265 (1987). It is clearly better to have an early influence on that decision. Needless to say, most lawyers would prefer to avoid having to advise their client that the Supreme Court has just agreed to hear a case after you voluntarily waived the right to file a brief in opposition to the cert petition.]

The Court normally will not grant review without first issuing a “CFR,” a for “call for response,” which the Clerk will issue upon the request of even a single Justice. See David C. Thompson & Melanie F. Wachtell, “An Empirical Analysis of Supreme Court Certiorari Petition Procedures: The Call for Response and the Call for the Views of the Solicitor General,” Geo. Mason. L. Rev. 237, 242, 247–48, Vol. 16:2 (2009).

The history of the Court not only giving Obama latitude most pro se litigants are not afforded is legendary. In fact, as the Petitioner Noticed to the U.S. Supreme Court, in a highly unusual Motion for DEFAULT JUDGEMENT UPON RESPONDENT FOR FAILING TO RESPOND TO THE COURT’S ORDER OF A MAY 20TH RESPONSE, the Petitioner hailed Obama’s as being coddled by the Courts to the point of injustice.

While in the process of exhausting State Remedies, Mr. Judy, as a Presidential Candidate in the Democratic Party, was challenging Obama’s ineligibility at the first T which was an executive court ballot challenge in 2012. This was not even in the Judicial Branch’s authority as yet but was an executive branch court. The Judge in the case, Judge Malihi, ORDERED Obama to make an appearance or respond by Counsel, and Obama’s attorney instead high-tailed it to the Secretary of State in Georgia stating they would do no such thing. The Secretary of State told Obama if he didn’t respond he did so at his own peril. Accordingly, Obama set precedent that if charged, the best defense was just to not show up to Court. Both he and his lawyer failed to show up for court in violation of a subpoena to do so. At the hearing Obama sat mulling over the defense contracts that had just been arranged with the State of Georgia to widen the ports and build defense equipment. Not surprisingly, Malihi made a turn- about and not only personally excused Obama but slammed the Petitioner’s witnesses and evidence to the wall.