TO RESPOND IN JUDY V. OBAMA 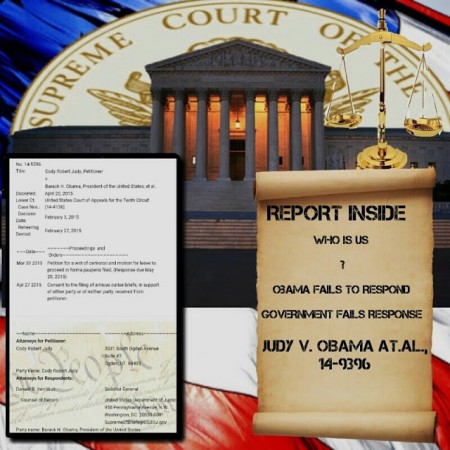 (May 28, 2015) — ’08, ’12, and 2016 Presidential Candidate Cody Robert Judy told supporters Wednesday listening to Michael Medved’s commercial that called Birthers “Attackers” and queried the listener that there was no good reason not to let foreigners into the Commander-In-Chief’s position that handles keys to America’s nuclear option as well like Obama has gutted the military commanders chiefly in charge of the leadership responsible for defending America, that there has come another sign or appearance upon the stage that indicates the United States Supreme Court has at least five Justices that would like to hear the case hurdling the Rule of Four that is necessary.

“Chief among four things that points us in that direction,” Judy said, “transpiring since my latest May 22nd Breaking News Report that has become this Blogs’ Second Most Viewed Post eight days ago now on Case Judy v. Obama 14-9396 which you might find interesting as well:

“1st Point-The Internet Site Certpool.com that manages to keep track of all the cases from every Circuit Court that has filed a Writ of Certiorari in the United States Supreme Court has begin posting CONFERENCE CASES listed for June 11th, 2015, which misses the June 8th date we had projected as in-sync function of normal procedures for the Court dismissing cases.

“Elaborating on the details of this site’s report, we see that just one of the cases ‘set for Conference’ had a due date of May 20th for the Respondent to Respond coordinating with mine. The greater number of cases that also contained the May 20th deadline were indeed set from the 10th Circuit for “the June 4th Conference” and the latest date of response I found on the June 4th Conference itinerary was ‘Response Due June 8th,’ overlapping my Case’s Response due date of May 20th by some 17 days.

“Indeed, of the 10 cases set for the Conference just from the 10th Circuit, 7 have dates extended out beyond mine as “due dates for Response” set by the Court upon the filing of the Writ of Cert.”

Not everything is recorded on the Docket Reports that are presented to the public view. Cody continued, “I remember from my experience when I filed an Emergency Motion for the U.S. Supreme Court to hear my Case in 2012 based on the term of the Court expiring before the coming election, and it was listed as a Supplemental Brief by the Clerk of the Court, which hardly gives a clue to the Public Eye of what is before the Court. That was filed July 16th, 2012 in Judy v. Obama 12-5276, which would have, if heeded, given the Court and the political arena plenty of time to adapt for the November Presidential Election. The result, of course, was not in the public interest or favor of fair elections in 2012 and represented an excruciatingly painful wound for all of us to bear.

“What this suggests is my case is not on the fast track to be dismissed as might otherwise be the case if it was or had been distributed for Conference on June 4th. On that website, you’ll see “BIO,” and that stands for “Brief in Opposition” requested. You see that on this particular case listed on the Docket Report of the site here. This of course tells us that the Court is wanting a response by the Respondent that was not otherwise filed or where the Waiver was filed first. On the other case listed on the BIO Reported cases thus far seen here, you don’t see that same Report on the Docket, which exemplifies or emphasizes my point that not all that is happening in a case is seen on the Docket Report.

“2nd Point, and that LITTLE something that doesn’t seem to bode all that well for me is that the U.S. Supreme Court Clerk has listed the Caption of my case as (CODY ROBERT JUDY vs. BARACK H. OBAMA, President of the United States et. al.,) and that is, of course, not how it was filed. Ask yourself how often you see the Clerk changing the caption of a case from how it appears on the papers they receive from attorneys? The public can see the Writ of Certiorari that was filed here on SCRIBD. 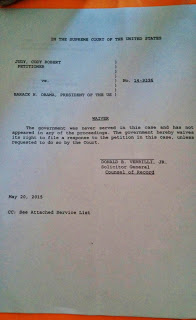 “3rd Point- This would indeed be the actual Response that I received from Donald B. Verrilli Jr., the current Solicitor General just yesterday, which was quite interesting in the way it was written. A. It was NOT signed! Now if I filed a Record to the Court that was not signed, it would not be counted as ‘valid’. This of course would indeed be considered a HUGE error and represent a formal LACK OF RESPONSE to the U.S. Supreme Court Order. The Court in my case has gone to great lengths in the past to, shall we say, ‘pull my hair out’ with trivial points of crossing t’s and dotting i’s and has not been very lenient to me as a pro se litigator, causing me great pain at times. This has also been recorded as when they sent my Writ back to me, needlessly costing me additional paperwork that is expensive with mailing expenses over years as well as providing ‘time’ for the Respondent and successfully delaying the Case.

“B. It also listed the Case differently than is presented by me in the Court, listing the official position of Barack Obama in the Government as President of the US. The last I checked, the abbreviation written by most juveniles for the United States of America is the U.S.A; therefore the wording of “US” pertains directly to, perhaps a small group of people that is not elaborated upon? Your guess is as good as mine. Who is “US”?

“One of the biggest points of my Case is if Obama was elected with fabricated identifications, forged long-form birth certificate, fabricated Selective Service record, fake Social Security number that couldn’t even pass E-verify, as was the example when they tried to show how easy Obamacare was to register for, as well as not even being a qualified Candidate that, should he be elected, is able to lawfully qualify for the Office and operate the powers of the President by the vested power WE THE PEOPLE have directed for the OFFICE after being both qualified and elected, then how is it possible to even admit Obama in the Court as “President of the US” unless it certainly doesn’t mean U.S.A?

Given the most equitably and lenient discernment possible, we come to the body of of the Solicitor General’s argument on the Waiver, which states, “The Government was never served in this case and has not appeared in any of the proceedings. The Government hereby waives its right to file a response to the petition in this case, unless requested to do so by the Court” and then.. it’s unsigned. (?)