(May 14, 2015) — There are not many Presidential Candidates who actually have their name as a Plaintiff in the United States Supreme Court with the Respondent being Barack Hussein Obama et. al., but that is exactly what we see happening with Cody Robert Judy.

Now, Sean Hannity is one talk show host Conservatives and Republicans love. He’s a family man, a defender of ‘conservative issues’ with a show on FOX News Obama was recently quoted in a news report as ‘wanting to muzzle‘. That tells you, Sean isn’t the talk show host you’d really think Obama would pick out for a News Special featuring his recent push for the Pacific Trade Deal blocked by U.S. Senate Democrats.

This might be all smoke and mirrors because today on Sean’s radio show we heard him back away from Republicans in Congress who were in support of it with Obama, based on Obama’s Executive Order capabilities while Democrats on the left feared a Republican President could also run away with the hen house pulling down wages and jobs in America on a fast track.

God Bless those who died or were injured in that horrible speeding Amtrak Train crash that was on a very fast track said to be going twice as fast as it was supposed to be going. This was very sad news today.

Here at the 2016 Presidential Campaign of Cody Robert Judy for U.S. President we have been getting some email like this, and take special notice and care of appreciation to the Semper Fi motto that is used by our United States Marine Corps: 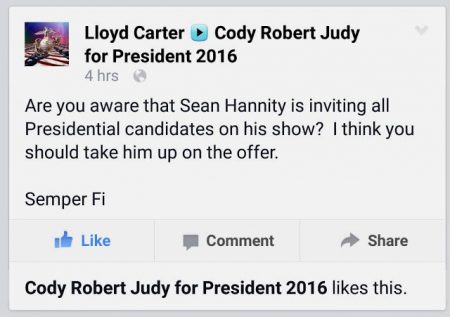 So we wanted to make an effort that our best hand is/has been extended in accepting that offer of Sean Hannity’s Show on Fox. We also owe thanks to all of those who are and have supported us in this effort to defend the “conservative principle” of the United States Constitution’s demand, as the qualification states that the Office of President and Vice President devolve only upon a ‘natural born Citizen‘, or a ‘Citizen‘ at the time of the Adoption of the Constitution.

The action now Judy v. Obama 14-9396 is a completely different legal and jurisdictional animal and the Respondents have until May 20th, 2015 to respond. Just to be completely open about this, Cody Robert Judy has opened by invitation the scholarly arguments for those who wish to merge the two terms ‘Citizen’ and ‘natural born Citizen’ in front of the U.S. Supreme Court by filing the appropriate document and letter to the Court that informs the Court that he is open for all opinions to be sent to the Court by those qualified to practice in the form of an Amicus Curiae, or friend of the Court. What that means, is those wishing to protect or incorporate Obama’s version as well as presidential Candidates Ted Cruz and Marco Rubio are welcomed into the case and able to direct the Court in favor of their candidacies. “It’s open season, and if no one shows what they believe for Obama, Cruz, and Rubio I guess Cody Robert Judy’s interpretation is correct and the Court may take that into consideration,” said a supporter for Cody.

With 13 Case numbers in Court, a blog of near 210,000 views noticed all over the world, a YouTube Channel with over 85,000 Views filled with commentary and political commercials over the last six years, a Facebook Page with the limit of 5,000 friends and a new 2016 FB Page created filling up fast with over over 300 people now from all over the United States, its getting harder to say Cody Robert Judy is a fringe candidate with no support from America. To simply dismiss the issue that has really never been heard by the U.S. Supreme Court between two Presidential Candidates of the same Party in the history of the United States really does affect every single American Voter. Yes, Cody ran as a Democrat in 2012 and intends to push ahead into a primary with former Sec. Hillary Clinton. At the heart of a case being heard, or at least one of the criteria for hearing a case in the United States Supreme Court,is the question: “How many people are directly affected by this issue?”

Cody recently did a national interview on the Radio USA Network on the show Chuck Morse Speaks that is available on podcast here as well as WOBC you can listen to here.

Read the rest at CodyJudy.