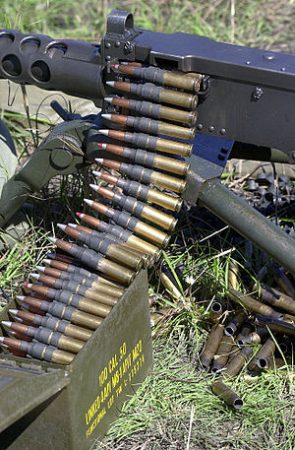 (May 10, 2015) — “Good evening, ladies and gentlemen, Roving Reporter here. Tonight we’re in for a special treat. We’ve been given the green light to interview OPOVV, a former presidential candidate during the 2012 elections. I might add that this is the first interview that OPOVV has ever granted.

“And here he comes now. Welcome to the show. How’s it going?”

“Hi. Thanks for having me on. To your question: Downhill. Straight to hell. We’re playing the ‘End-Game’ while most Americans haven’t yet figured out that we’re even in a game. They think that it’s not happening here, as if the Twin Towers were in Kuwait. The just don’t understand that they better arm themselves to the teeth while they still can.”

“I heard that you gave very few speeches in your run to the Oval Office; what was that all about?”

“Right, a few. More like question-and-answer sessions, really. I mean, everyone read what I wrote in the political blog, The Post & Email, so they knew what my platform was. But the reason why there were so few speeches was that I was adamant to remain true to my philosophy, which was the requirement that anyone coming to hear me had to show a loaded gun to get in.”

“Right here, on my belt inside my sport coat, see?”

“Tell me about your ‘Deportation Plan’?”

“Easy. One year. All Muslims and illegal immigrants, one year to leave, and if we catch them still in our country after one year, we confiscate all of their wealth and kick them out with nothing. Also, any so-called ‘Anchor Baby’ 18 years old or younger gets sent out of here along with his parents and all the rest. No more ‘Anchor Babies’. Is that clear?”

“Clear. You mentioned bringing back the Draft. What was that all about?”

“I’m glad you asked. The Draft is tied in with solving our social problems. I believe that everyone should invest in his country something besides cash. I’m talking about a ‘time’ investment. And no Welfare and Food Stamps, except as a ‘safety-net’. That was the original idea in the first place, not to live off of it for generations.

“Look, the public education system in our country is worthless, and for proof just look at all the idiots who voted for Obama.

“Here’s another thing: government employees shall be held to the exact same laws and standards as private employment. You cheat, lie, steal, you go to jail.”

“So Lois Lerner is in jail?”

“She and a few thousand others, for sure. Some sent to Gitmo.”

“You seem to have a very poor opinion of the Department of State.”

“Well, they earned it, now, didn’t they? Trying to buy people off when all they’ve been doing is giving money to dictators and crooks. Hate to bust their bubble, but a good idea is better than a bad idea, and people can see through hype pretty easily, usually, that is.

“All the countries south of the border hate us because we’re the reason why they grow drugs instead of food. Real cash crops. It’s because of our insatiable appetite for drugs. They blame us for darn good reason. It’s our fault, and throwing more and more money at it is the same as throwing more gasoline on a fire.

“Giving money to our enemies is insane. We’re the ‘Death Merchants’ of the world, did you know that? We sell more weapons and bullets than anybody. War makes money for us, especially land mines. One thing Princess Diana did in her short life was to bring attention to the horrors of landmines, and it’s too bad she didn’t live and keep on the anti-mine bandwagon. The good ’ole USA makes its fair share of mines and sells them worldwide.

“Hold it, I’m not finished. I know the argument about ‘we need those mines in Korea.’ No, we don’t. There are ways to deal with problems without always being so damn defensive, understand me here?”

“No, I didn’t say ‘Attack North Korea’. What I said was our foreign policy is so convoluted as to confuse friend and foe alike. There can be no areas that are not clearly understood.

“Look, we seem to lack people with dignity these days, as if America isn’t worth it or something. Well, I’m here to tell you America IS worth the effort to put her on top and, furthermore, to keep her there. There’s a lot of good men who got out of Obama’s military that we need back in. We need people who are willing to go the extra mile.

“As to my ‘lack of foreign policy experience’, here’s a story and I don’t care whether you believe me or not. When I was around 20 I was attacked by a couple of guys and had a knife pushing against my throat by one and my head held back by the other. Of course I was fighting back, and all I got to say about that is that I’m here, get my point? I count that as ‘foreign policy experience’. 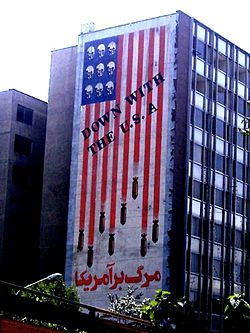 “These so-called ‘talks’ with Iran would be a joke if they weren’t so serious. I’ve said it before and I’m not going to go into it here, but Obama is a patsy for Iran, okay? Obama got ‘elected’ on the platform to wipe out Israel and weaken America to the point of accepting Sharia Law. The fact that he’s been importing MILLIONS of Muslims doesn’t seem to phase anyone except me. I mean, I was the only candidate advocating the complete removal of ALL Muslims; remember that when things start going South.

“The simple fact is that Muslims’ Sharia Law and our Constitution cannot coincide. It’s impossible. You can’t have a ‘religious law’ and a ‘secular’ law occupying the same place at the same time, it’s impossible. Just ask India, and speaking of India, de-nuke Pakistan.

“Look. Bottom line is that no way can Iran be allowed to get nuclear weapons. It would be like giving a spoiled two-year-old a book of matches, that’s how irresponsible it would be.

“Had I been elected there’s a few guys I would’ve reeled back in and I’m not going to name them all, but Col. Ralph Peters would’ve been my liaison with the Chairman of the Joint Chiefs of Staff, who would’ve been General Jack Keane. It would have been like Roosevelt telling Marshall ‘nothing short of unconditional surrender.’ I’d tell Keane to go after the bad guys and I’ll give you whatever you want whenever you want it. And I didn’t say ‘need’; I said ‘want’. End of story.”

“Yes, it is, unfortunately, since we’re out of time. Well, thank you. What’s that? One more thing to say? Sure, go ahead.”

“Goodbye to the DHS, The Fed, the UN, and the IRS, for starters. And go after the crooks of the Iraqi ‘Oil for Food’ program and our own ‘Stimulus’ rip-offs of the American taxpayer. Thanks.”

“Now we’re out of time. Thank you for watching and have a good evening. This is Roving Reporter, goodnight.”

Interview with a Former Presidential Candidate added on Sunday, May 10, 2015