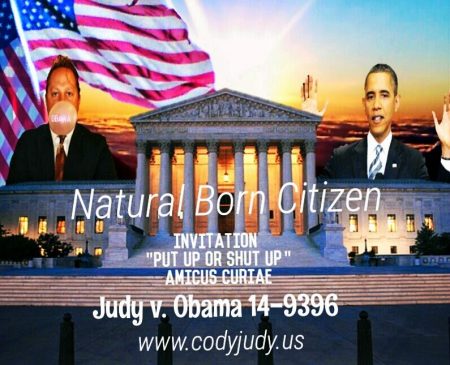 In the most critical and controversial court, which is that of the court of public opinion, the vital artery of national defense understood as the ‘natural born Citizen’ qualification requirement for the Office of President and Vice President is being cut into by both Republicans and Democrats. In 2007 “Birthers” were a yet unknown group upon the American Pyche but the incubation was about to burst as in 2008 with Sen. John McCain and Sen. Barack Obama.

The Supreme Court of the United States has never had a case involving two Presidential Candidates squared off with one citing the other is ineligible based on one not being a ‘natural born Citizen’ and causing harm to the other’s campaign in American History, but that is exactly what has happened and is happening in the newly docketed Case in the Supreme Court, Judy v. Obama 14-9396.

Many would say the issue is over with Obama in the White House, but scholarly reviews differ in points of view. A consensus is building at least with the political ground shifting with Sen. Ted Cruz, Sen. Marco Rubio and even the former Governor of California weighing in on the circumstances of the civil battle which offsets the turf Obama has already infringed upon. If it stopped Arnold Schwarzenegger, who emphasized so much appreciation for the opportunity America has given, shouldn’t it stop Sen. Ted Cruz? Indeed, a few of America’s Presidents were not born here, or didn’t have parents who were Citizens at the time of the adoption of the Constitution, and the exemption was tied into the Constitution as part of the requirement recognizing the jurisdictional importance of the ratification of the Constitution as Supreme Law.

Three such reviews, all being used as weapons at the bully pulpit, have come in the reviews published by scholastic establishments but are notably missing actual legal case numbers we associate with the interpretation of law and the United States Constitution.

1-The Harvard Law Review published a Commentary by two former Solicitors General by Neal Katyal and Paul Clement as “On the Meaning of “Natural Born Citizen” March 11,2015.

2-Professor Sarah Duggin stated: “No, I don’t think it’s an open-and-shut case. I think the better argument is that Senator Cruz is eligible to run for president and to serve as president of the United States. But absent a Supreme Court ruling or a constitutional amendment, it is not open-and-shut.”

‘The potential controversy attached to Cruz’s legal standing to run for president has precedent in recent times. The late Sen. Barry Goldwater was born in Arizona while it was still a territory and not technically part of the United States. More recently, some people argued that his birth in the Panama Canal Zone should have disqualified Sen. John McCain from running.’

She wrote, ” Is Ted Cruz a natural born citizen eligible to serve as president?” acknowledging the very difficult standards for the Supreme Court to even be able to weigh in on the subject because of the laws conducting ‘standing’ really requiring another Presidential Candidate to bring it to the Court, and then hurdling the ‘political doctrine question’ which disfavors the Court interfering with elections for one party or the other.

While scholarly reports and commentaries are valuable, they indeed do not have the impact of being law, and when the laws are especially uncomfortable to politicians every effort may be used to bully the law or jar it out of place for the convenience of politicians, in this case, wanting to take advantage and pursue ulterior political ambition.

HOW DOES THE NATURAL BORN CITIZEN REQUIREMENT EFFECT EVERYONE

A recent natural born Citizen documentary video was featured winning a prestigious Telly Award. This video is very informative and highlights in seven minutes the origins and real founding of the natural born Citizen clause as a requirement for the Office of the President.