“NOT FOR PRESS PURPOSES” 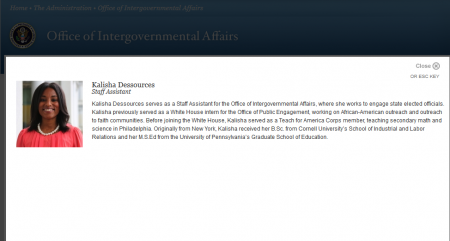 On November 20, 2014, Obama gave a speech in which he outlined “executive actions” he planned to implement to “fix our broken immigration system” in the absence of congressional legislation. His executive actions were not entered into the Federal Register, but rather, took the form of two presidential memoranda which were only tangentially related to his announced actions.

In January, the state of Texas led a 26-state coalition which filed suit against the federal government, claiming that they would bear considerable financial injury if Obama’s executive actions were implemented.  An Amicus Curiae brief was filed in support of the lawsuit.

In response to a Freedom of Information Act request made last Thursday to the governor of Vermont, Peter Shumlin, on Tuesday The Post & Email received four pages of responsive documents indicating that a White House conference call held with governors’ staffers on February 17, 2015 was “off the record and not for press purposes.”

On February 16, Judge Andrew Hanen had placed a temporary injunction against the implementation of Obama’s executive actions.  Hanen’s ruling contended that the Administrative Procedure Act had been violated by the federal government for its failure to allow the customary 30-day public comment prior to a major policy change.

The Post & Email sent identical requests to the offices of Connecticut Gov. Dannel P. Malloy and his Atty. Gen. George Jepsen.  New Mexico Gov. Susana Martinez and her Atty. Gen., Hector Balderas, responded that they would require more time to search for any responsive documents.

Jepsen’s office responded within several days that it possessed no documents responsive to our request.  The Post & Email has received an acknowledgement but no final response from Malloy’s office.  Our initial FOIA request to Connecticut officials, of whom this writer is a constituent, was submitted on March 18 and has received the slowest response.

A total of 14 states plus the District of Columbia joined an Amicus Curiae petition filed with the U.S. District Court for the Southern District of Texas on March 12 in response to Hanen’s injunction.   In their brief, led by the state of Washington, the states contended that “The amici States have a strong interest in the outcome of this stay request because of the millions of residents in our States who would be eligible to participate in the programs the district court erroneously enjoined and the economic, humanitarian, and public safety benefits that our States will receive through these programs. We also add a helpful perspective by rebutting the distorted picture Plaintiffs have offered of the impacts of the federal government’s recent immigration directives on States” (pp. 1-2).

The governors of three of the 14 states – Connecticut, Washington, and New York – inserted themselves into the debate over a recently-signed Religious Freedom Restoration Act (RFRA) enacted by the Indiana legislature and signed by Gov. Mike Pence. Of the three, Malloy was the most vocal against the bill, going so far as to call Pence “a bigot” on national television because it did not specify that “discrimination” against any class of individual would not be permitted.

On Tuesday Hanen refused to lift his temporary injunction against Obama’s proposed actions for the second time and contended that the Obama regime had misled the court regarding whether or not any components of the executive actions had been implemented.  The U.S. Justice Department appealed Hanen’s ruling to the Fifth Circuit Court of Appeals in New Orleans, Louisiana following the February 16 ruling, which granted a request for an expedited hearing to take place on April 17.

In late February, a research assistant to a member of the Maryland House of Delegates reported that she and a colleague, Ted Hayes, had listened to three White House-sponsored conference calls in which the transformation of urban communities to “receiving communities” for illegal aliens was discussed. Susan Payne, who works in the office of House of Delegates Rep. Pat McDonough, gave an interview to radio host Mark Levin which revealed the plan to import between 13 and 15 million more illegal aliens into the country and award them with benefits paid for by U.S. taxpayers.

In one of his two presidential memoranda dated November 21, Obama had expressed a plan to create “welcoming communities” for immigrants and refugees which would entail the creation of a “White House Task Force on New Americans” and cooperation from the states.

Under current federal law, illegal aliens are not “new Americans.”

The emails received from Vermont Gov. Peter Shumlin’s office were accompanied by the following email and are shown below:

Attached please find records in response to your public records act request of Governor Shumlin’s Office.  We have redacted personal contact information pursuant to 1 VSA 317(c)(7).  If you feel any information has been withheld in error, you may appeal to the Governor’s Chief of Staff, Liz Miller.

If you have any questions about the attached, just let me know.

Counsel to the Governor Kalisha Dessources appears to be a White House intern from the University of Pennsylvania.

A search for “Gabe Amo” at the White House reveals the following results:

However, when searching the White House Intergovernmental Affairs page, neither Amo’s name nor his photo appears. 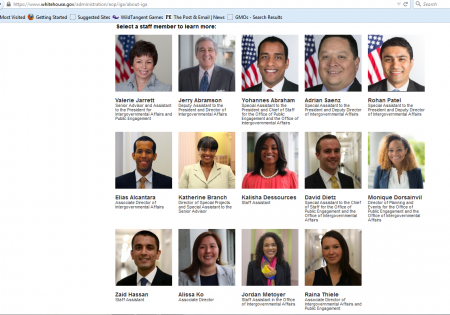 A “Gabe Amo” sent several emails to the office of Missouri Gov. Jay Nixon which The Post & Email received through a FOIA request in January.  Despite the claim by White House Deputy Press Secretary Eric Schultz that senior adviser Valerie Jarrett had been “keeping in touch with Gov. Nixon during Ferguson fiasco,” which referred to the time leading up to the announcement of the St. Louis grand jury that it would not indict Officer Darren Wilson for killing an unarmed black teen last August, Valerie Jarrett’s name does not appear in any White House communications with Nixon’s office receive by this publication.

Wanted to make sure there [sic] a way to get ahold [sic] of the Governor in case a senior-level call needs to be placed this afternoon.