HOW WOULD THEY DO IN A “STRESSFUL SITUATION?” 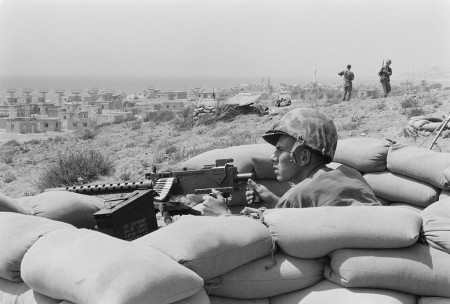 (Apr. 7, 2015) — They say never volunteer, so I didn’t. The Gunny did it for me. It wasn’t until after it was all over and done with that I learned that the man who volunteered me was some sort of spook, because I saw him at the Officers’ Club in Subic Bay a couple of months later and again on the USS Liberty tied up to a pier in Valletta’s harbor two years after. In Malta he was dressed as a civilian but he acted like a General. I really wanted to wring his neck, but you don’t disrespect a General and expect to get away with it.

But then if it wasn’t for him I never would’ve seen, up close and personal, Southeast Asia’s beautiful fauna, choked on smokeless powder, tasted buffalo dung, heard the whiz of bullets passing by, played Dr. Kildare, and smelled rice paddies that will forever occupy a crevice in my left nostril, reminding me of an invincible youth in a land far away and green as emeralds.

I wasn’t the only one the “General” volunteered. Some of us were killed, some wounded, and some came out of the adventure without a scratch, I kid you not. Nothing, but nothing, brings a person’s character out more than being in a stressful situation, and  I would venture to suggest that people shooting at you qualifies as a high-stress environment. But the interesting part about being up against the wall is how you yourself react and others around you react to a non-foretold stimulus (Surprise! Rat-a-tat-tat!). I was actually surprised at myself: time seemed to almost come to a stop and I remember thinking that if I relaxed any more I’d fall asleep, all the while blasting away at the enemy with a machine gun.

So I learned a little bit about life that fateful day, and it has served me well in life: trust your gut rather than the stripes, rank, the Hershey bars (medals), and the glitter/ink/boasting. If you asked me if I ever served in the military, I’d tell you never a day, don’t remember, and/or (my most common response), “That was another life,” meaning, of course, that I don’t want to talk about it. It wasn’t that the military way of doing things and I were at odds (we were); it was that I did my bit for Uncle Sam and that was that. I’m O-U-T.

Of course, times change. None of us could’ve foretold that an illegal Muslim immigrant plant (Obama) would take over our country, trash the Constitution, put the fear of God into every politician who would speak the truth about ineligibility, buy off the Joint Chiefs of Staff, and have an army of Obots following illegal orders. Never had our country been represented by such incompetent nitwits, starting with Hillary and ending with Holder.

I wasn’t drafted. I joined up, offered my services, volunteered. And as thousands before and after me, I did my service with at least enough honor to be awarded a Good Conduct medal and an Honorable Discharge. This I will tell you: I’d rather be alone in my foxhole than share it with the likes of any of the possible contenders for the office of president in 2016, and that includes Jeb Bush. He can take his “love” for the illegal immigrants and explain it all to the parents of the children who were murdered by an illegal drunk driver or just murdered outright by an illegal.

No, I’d rather rely on myself to watch my “6” than to be fooled to let my guard down and get stabbed in the back. No Hillary or anyone else on the horizon, and that includes Jeb Bush.