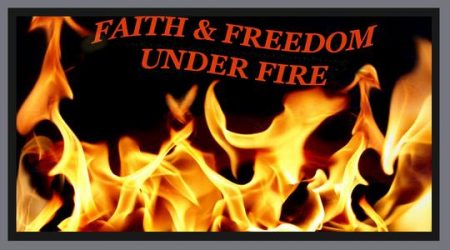 (Apr. 4, 2015) — The assaults against the Judeo/Christian faith in the United States have been increasing at an alarming rate in nearly all aspects of our daily lives.  The decline has been championed by social liberals who have used laws that were meant to protect our liberty of conscience as weapons against the moral majority. These attacks span the realms of education, where our children are eroticized and indoctrinated; in government, where coercion hides behind the labels of hate speech and tolerance; in our professional lives, where businesses are coerced into participating in practices that insult their belief systems; and in the world of entertainment, where somehow what is immoral is portrayed as normal and acceptable. When considering that a mere decade ago, George W. Bush won his presidential bid primarily due to his campaign promise to pass a federal Defense of Marriage Act, the decline is more than astounding.

This begs an answer to the question:  how did the country digress to such levels in such a short period of time? The answer is obvious to many but not to all.  The church, which always stood in the gap regarding morality, has been silent but its militant opponents have not.  To be sure, there are many criticisms that are valid regarding the impotence of today’s church but perhaps the most effective muzzle has been the 1954 Johnson Amendment. This Amendment that was tacked onto IRS legislation by then Senator Lyndon B. Johnson effectively placed a gag order on the church’s political voice by creating an IRS 501(c)3 restriction prohibiting the political speech of non-profit corporations. The repercussions of this amendment have manifested themselves in a culture that is more concerned with political correctness than biblical morality. As a result, churches in America have failed their congregants by not loving them enough to tell them the truth. They have also failed God in respecting the laws of man above the laws of God – making the church subservient to the state.

Consequently, the church that becomes an individual once it is created by the incorporation of the 501(c)3 must submit the church’s sovereignty (and voice) to the state, through required compliance with state and federal laws. This holds true in every state except Virginia that in 1802 prohibited the incorporation of churches, believing it to be a violation of the First Amendment. It is highly unlikely that the American churches have thought through the conundrum they have created by pledging allegiance to both God and the government.  It is common practice to file for non-profit status when organizing a church.  In so doing, the churches have agreed to become a second class citizen that has forfeited its First Amendment rights in exchange for a tax-exempt status.  The irony is more astounding when considering the fact that prior to applying for a tax-exempt status, all churches enjoyed tax free statuses.

The most recent manifestation of the compromised church is evident in Indiana where Gov. Mike Pence found himself smack dab in the middle of the intolerant left when he signed Indiana’s Religious Freedom Restoration Act. Pence and the Indiana legislators believed this would protect the religious liberties in the state the same as the national Religious Freedom Restoration Act (RFRA) protects against the federal government from imposing burdens on the exercise of religion.

Last year the need for such legislation became evident when a florist in the state of Washington and bakers in Arizona and Colorado faced legal challenges arising from their refusal to service same sex marriages based on their religious convictions. These cases resulted in the closing down of their businesses.  Indiana’s legislation, along with other states, attempted to circumvent this problem by passing RFRA legislation.  Pence asked on ABC’s This Week with George Stephanopoulous, “…is tolerance a two-way street or not?”  The answer to this question is a loud and reverberating NO!

Another good example of how the liberals are flexing their (im)moral muscles occurred last November when lesbian Mayor Annise Parker of Houston had her city council issue subpoenas to five area pastors.  The subpoenas demanded 17 forms of communication in retaliation of the Mayor receiving 30,000 petitions to put her special rights ordinance on the ballot.  The militant move backfired and resulted in the Family Research Council launching an explosive I Stand Sunday where the pastors were supported by over 7,000 at the event’s location.  Multitudes more attended through simulcasts throughout the nation.  Dr. Ronnie Floyd, President of the Southern Baptist Convention was one of the speakers.  Dr. Floyd stated:

“Our greatest problem is not in the White House, but God’s house!

If you’re wondering why things like this are happening in cities like Houston, Fayetteville, and San Antonio, look in the mirror. The blame for this doesn’t rest with Annise Parker or the city — but every Christian, who has quietly stepped into the shadows on tough truths.

It’s because a lot of people in our churches have said, ‘I just don’t want to get involved.”

Unfortunately, the answer to the problem may not be as simple as “getting involved.”  Although many people of faith long for their church leaders to take a strong stand and defy the Johnson Amendment, the churches remain silent.  The consequences are not as straight forward as one might think.  For the most part, many patriotic believers understand that the First Amendment protects our right to worship and speak freely.  And others also understand that any law that violates the Constitution is no law at all, as stated by Supreme Court Justice Ruth Bader Ginsberg in Bond v. USA, as well as by numerous other judges in other cases.  And of course there is the Hobby Lobby decision that protected the free speech and religious rights of corporations, interpreting them to be the same as citizen individuals.

However, the small print that is seldom read in the 501(c)3 application changes the personhood status of the non-profit 501(c)3 corporation in a way that is nothing short of diabolical.  If it did not, the Hobby Lobby decision would protect churches’ rights the same as it does other corporations’ rights.  And any violation of any church’s First Amendment Rights would also be a violation of the 14th Amendment that ensures equal treatment under the law. Churches that have willingly organized in this manner have contractually surrendered their constitutional rights in exchange for monetary benefits. And worse, should they realize the implications of their actions and seek to dissolve their church corporation, they are legally bound to donate all of their assets to another 501(c)3, or the government has the right to come in and confiscate everything they own, as they did with the Indianapolis Baptist Temple.

The good news is that the Johnson Amendment, which is an administrative law and not a constitutional one, has no legitimacy in the American jurisprudence system, since any law that violates the US Constitution is no law at all.  Furthermore, it complies with neither the philosophies of positivism that demand laws must conform to written rules and regulations – such as our Constitution, nor does it conform to naturalism that maintains that a law must reflect the eternal principles of justice and morality that exist independent of government – which in this case would be reflected in our founding documents.  The gag order we know as the Johnson Amendment therefore must be repealed, since its unequal treatment violates not only the 1st Amendment by restricting both the freedom of speech and freedom to worship by segments of the population; and by doing this, it also violates the equal treatment protected in 14th Amendment, which also was adopted to suppress the mischief and wrongdoings that may be perpetrated by the states; and lastly, it violates the due process protection afforded to us in the 5th Amendment through the institution of an administrative law and not a constitutional one.

To support the above comments, in Heller & McDonald, the Supreme Court held that constitutional rights are enshrined with the scope they were understood to have when the people adopted them. This decision also supports the repeal of the Johnson Amendment, since the administrative law that it created infringes upon the original intention of the First Amendment to protect any religious activity from state intervention, as well as the other Amendments mentioned.  Additionally, in Bond v. United States, the Supreme Court held that any individual has the constitutional right to stop the administrative enforcement actions of any state or governmental agency to put a halt to the continual loss of their “rights and freedoms.” In these cases, the courts recognized that state administrative laws are nothing more than an abuse of power, and in most cases “illegitimate” as well as unconstitutional.

In conclusion, those who are of the opinion that the future of America depends on the revival of her citizens and churches should seriously consider what action they can take to start the repeal of the insidious Johnson Amendment.  And additionally, those who are contemplating the organization of a church entity should consider Pastor Chuck Baldwin’s Liberty Church Project that exists to resurrect the patriotic-pulpit by establishing independent, unincorporated, unorganized, non-501(c)3 churches and fellowships.

If where the Spirit of the Lord is, there is liberty, the liberty of our faith-based voices must sing louder than those who seek to silence them.  The churches may have faltered in the way they have organized but churches are more than organizations; the real church resides in the heart of every believer – and that reigns as freely today as it did in the Garden of Eden.

May the Spirit of the Lord continue to reside in America and may the liberty the Spirit provides endure for the generations that follow.

One Response to "Faith & Freedom Under Fire"