“WE ARE FORCED TO ADDRESS THESE ISSUES” 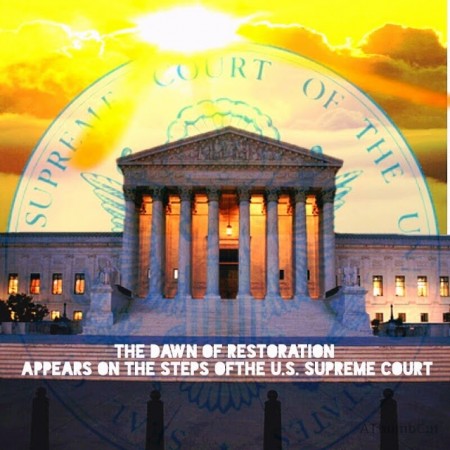 (Apr. 1, 2015) — Yesterday this blog featured “PARTY TO PRINCIPLE- Birth of the Nation – Announcing U.S. Supreme Court Appeal on Cruz’N Obama Ineligibility” and today we wanted to focus just a little bit more on the key elements of why being a Party to Principle is so important and why a Restoration is indeed necessary for a stabilization of our Nation. We hope to begin again with the appeal of Judy v. Obama 14-4136 to the U.S. Supreme Court in a Writ of Certiorari.

Our Nation was Born, and it has grown in leaps and bounds, into a young teenager who is gangly, rebellious, and inherently clumsy. It is a natural course. It takes teenagers a good 10 to 15 years to look back and say, “You know, Mom and Dad, I want to thank you for teaching me what you did, because I now see the value in it.” Stapling this point to the board, we need only look around at just how many of us no longer see the U.S. Constitution as preciously valuable.

Our Writ of Certiorari goes into this a little noticing a correlating anthem that is somewhat flat from respected academia. It is very easy for someone who can sing very well to hit some flat notes. All that has to happen is for the voice not to be heard for an instant, which scores the great importance of hearing and listening. Amazing is the voice that is in tune, and awful is the one that is just a little off. Of course we have honest mistakes that we can bear, but when the voice begins to nauseate our stomach we must stop and find out how to best correct it.

We all have weaknesses and we all have strengths. My strength might not be, let me correct that, is not spelling. It’s unfortunate good spelling is considered such an important detail in communication because I feel often like I am in a constant state of apology for misspelling and grammatical errors which seem to come so easily to others I admire. I have and constantly work hard to improve my weaknesses and make them stronger. We are celebrating this week going over 500 posts on this blog and 200,000 views, and as you roll back the blog I believe you can see improvement. My point in this is academic professors all, though schooled and trained in certain aspects of detail and having great strength in some areas, can also be infants in others.

We all know President-Elect Barack Obama (U.S.C. Amend. XX Sect. 3 ‘if the President elect shall have failed to qualify’) and Sen. Ted Cruz were once Professors of Constitutional Law and both attended Harvard. In the political arena you’d have to be a recluse to not see the two former Solicitors General who have had their commentary – “On the Meaning of “Natural Born Citizen” published in the Harvard Law Review MAR 11, 2015 128 Harv. L. Rev. F. 161, Neal Katyal & Paul Clement, of which Obama was elected as President at one time. An opposing view of the article from notable Mario Apuzzo is here.

I might add here that there may or may not have been a Twenty Million Dollar grant and for sure there was major influence from Saudi Arabia at about the same time.

This brings me to another academically respected professor teaching at the Columbus School of Law of Catholic University of America, Sarah Helene Duggin. She is well-noticed of late because of her research as a professor who was published Oct. 28th 2013, specifically: Is Sen. Ted Cruz a natural born Citizen eligible to serve as president. Constitution Daily’s theme is ‘Smart conversation from the National Constitution Center‘ and is “the first and only institution in America established by Congress to disseminate information about the United States Constitution on a non-partisan basis in order to increase the awareness and understanding of the Constitution among the American people.”

Now in this article she specifically states that “There are no more Princes wanting to infiltrate America’s Presidency,” which Obama’s financed education and adoption is a walking, talking repudiation of. She says: “Finally, the natural born citizenship clause is both an anomaly and an anachronism. The way in which the clause differentiates among United States citizens is contrary to the overall spirit of the Constitution; the risk that foreign nobility will infiltrate our government is long past; and place of birth is a poor surrogate for loyalty to one’s homeland in our increasingly mobile society and our ever more interconnected world. The best solution would be to amend the Constitution, as many legislators on both sides of the aisle have proposed over the years. In the absence of an amendment, the clause should be narrowly interpreted.”

While admitting “Foreign Influence” was the historical scope of future Supreme Court Chief John Jay’s Letter to George Washington as the check and motive for ‘natural born Citizen‘ in the qualifications for Office of President, she cites the Naturalization Act of 1790 – The Naturalization Act of 1790 probably constitutes the most significant evidence available. Congress enacted this legislation just three years after the drafting of the Constitution, and many of those who voted on it had participated in the Constitutional Convention. The act provided that “children of citizens of the United States, that may be born beyond the sea, or out of the limits of the United States, shall be considered as natural-born citizens.”- but does not mention the specific detailed repeal in 1795 of “natural born Citizen” words replaced with “Citizen.”

While recognizing the problems with getting a presidential candidate with standing to repudiate an infringement clear to the U.S. Supreme Court, she argues Sen. McCain’s case with no mention of Judy v. McCain or past U.S.S.C. case Judy v. Obama as if these records were unknown to her enlightenment and research. To her credit, she admits the subject is not decided and is in need of U.S. Supreme Court Review, but advises until then that the Constitutional Key of the Office of the President in qualifications be run over or ‘narrowly interpreted’, assuming the great difficulty that I indeed face in getting to the U.S. Supreme Court properly, and representing a bi-partisan effort, is never going to happen.

The United States Naturalization Act of January 29, 1795 (1 Stat. 414) repealed and replaced the Naturalization Act of 1790. The 1795 Act differed from the 1790 Act by increasing the period of required residence from two to five years in the United States, by introducing the Declaration of Intention requirement, or “first papers,” which created a two-step naturalization process, and by conferring the status of citizen and not natural born citizen. The Act specified that naturalized citizenship was reserved only for “free white person[s].” It also changed the requirement in the 1790 Act of “good character” to read “good moral character.”

How interesting that the Act of 1795, as well as changing the absolute conundrum of naturalization with natural law in Citizen and natural born Citizen, made the distinction of “good character” and “good moral character.” While maintaining as professors ‘good character’ in their esteemed and respected positions of scholastic reputation, a morality of the Constitution is certainly lost as the integrity of boundaries is breached in their assertions that ‘time’ and ‘place’ in the term ‘natural born Citizen’ – born in the U.S. to Citizen Parents – is worth being narrowly interpreted. Now is it benign or malicious?

What would we as Americans say to someone who says, “The time of the Convention on Monday, September 17th, 1787 never happened”? This nation was never born and the United States of America has no boundaries or place attributing anything considered as opposing that view as ‘contrary to the overall spirit of the Constitution’? Wouldn’t you say that person is really stupid or is acting as a domestic enemy of the United States?

We are forced to address these issues in the Writ of Certiorari because of the respect our own U.S. Supreme Court Justices indeed have for these men and women. I don’t like to have to make it a public record, but they obviously have no hesitation in making theirs public, and without argument it can indeed become policy. Way down the road it may seem like an obvious mistake which was regretted and would need to be changed, just as that Naturalization Act of 1790 which lasted 5 years and was regretted.