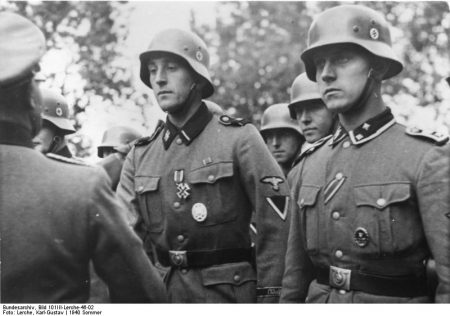 (Mar. 22, 2015) — They wore jack-boots and leather trench coats. They wore the Death’s Head insignia. They were the worst of the worst. They were the most feared troops of World War II. They were the Waffen-SS, shock troops who held no compunction about killing everything in sight: men, women, children, animals, crops and poisoning wells.

The Waffen-SS possessed no empathy whatsoever. They owed total allegiance to their Fuhrer. Follow any order to the letter; never question. Unthinking-robotic-killing-machines. These are the troops that ran the trains, all across Europe, day and night, that fed the Nazi concentration camps during World War II. Thy unloaded the cargo and gassed them until dead, then cremated the corpses and hid the evidence in mass graves made up of millions of bones.

Mass psychosis is a result of the uneducated trying to believe they are somehow being productive. Chairman’s Mao’s death squads roving China during the Cultural Revolution in 1966 murdered anyone who was “educated” or had knowledge of the world outside of China. The same is true of Pol Pot’s Khmer Rouge.

Today’s world also has its “Purveyors of Death” in the death cult that is known as ISIS. Due to worldwide communications and travel opportunities, ISIS is unique in that it crosses borders and oceans. Nevertheless, the adherents of ISIS could be substituted for the Khmer Rouge, believers in Mao’s “Little Red Book,” or the Waffen-SS. These are people, irrespective of which century they find themselves in, who are the “Purveyors of Death.” Each individual of each group shares the same mental makeup, the same world outlook:  “I have zero self-esteem, so fear me. I belong to a brotherhood of like-minded crazed individuals.”

As they say, they are in every state and just about every town. They are in the White House. Obots support this terror cult. Payments have been made, from the death of Americans to millions of dollars, to this cult.  Obama gave them Libya and tried to give them Egypt. Obama is giving them Syria, Iraq and trying his best to throw Israel under the bus.

Today, America’s eye is on the Sweet 16 NCAA playoffs while ISIS has its sights on our way of life. The Purveyors of Death are out there, ready to pounce. Will we be ready for them?