WILL HISTORY REPEAT ITSELF? 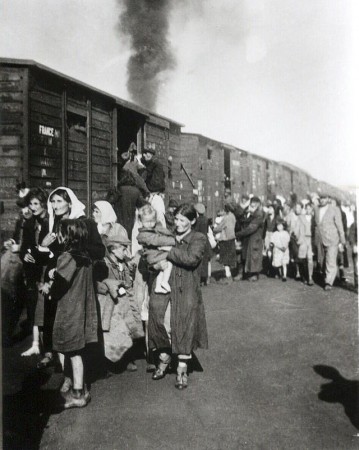 The curtain rises on a desolate prison yard scene. The backdrop is of fences and guard towers going off into infinity: far-off rolling hills, denuded of trees. Center stage is a statue of Hillary Clinton, dressed in an ankle-length tunic. The statue is of dark bronze and 12 feet tall. Stage left is a gate.

Enter the Counselor (Commandant of the Camp), reminiscent of “The Bridge on the River Kwai movie.

Large speakers, hanging from the guard towers, begin to play a scratchy, tinny and poorly-executed rendition of  Sousa’s “The Stars and Stripes Forever” as we hear the sounds of buses arrive, brakes hissing and doors opening.

A group of people begin to enter through the gate as a recording of Hillary’s voice comes out of the statue.

Hillary: “Welcome, one and all to ‘Camp Fun.’ We have many activities planned for you, and the sooner you get through the program, the sooner you can go back and share the ‘Good Tidings’ with your neighbors. Please follow the instructions that the camp ‘counselor’ will give you. Thank you for your dedication to the New World Order, thanks to our Federal Reserve system of fractured banking practices.”

Counselor: (Music subsides.) “Attention. Your attention, please. I am Counselor. You may not address me. You first ask a guard, a Junior Counselor, about any problem you imagine you have.

“Women, please line up over there. Men, you line up over here. No talking! Leave bags; they will be delivered to your dormitory building by your neighbors about to be let out and return home to spread the ‘Good Tidings’ of their success.

“You no talk to them! They may say things meant to trick you! You not listen to whatever they may say!

“Wives and husbands will be reunited when you leave Camp Fun. You will now march to infirmary where you will disrobe and get nice tunic like Hillary wear.

“After haircut and medical exam, you go to nice cafeteria where you eat big bowl of Jello, packed-full of good stuff to make you sleep until morning. Need plenty rest after harrowing ride to camp. For those of you who refuse to eat all Jello, you get to go back to nice doctor and nurse and get good vitamins via a syringe.

“Okay! Now, all happy. You here for fun. Now march off to the separate buildings. Waving, this one time, permitted, but don’t overdo it. One wave. One wave only!

The sounds of “The Stars and Stripes Forever” begin again, as does Hillary’s welcoming speech, as the inmates (campers) march off the stage and up the aisles in the theater and out into the lobby.

Curtain is lowered as the music and Hillary’s voice fade.

End of ACT I

Curtain rises with the stage divided in half: left side is the women’s dorm, right side is the men’s that could be mistaken for a scene from the Treblinka Nazi death camp, right down to the striped pajamas and many-tiered wooden bunks.

On either side there are the same number of men and women sitting on wooden chairs around a Ben Franklin stove.

The one hanging bulb on the men’s side goes out as the curtain reaches its zenith.

Edith: “I’m so worried about my husband. He had medicines that were in my suitcase.”

Mary: “But you said you told one of the counselors that he needed those pills. I saw you give them to him.”

Edith: “But what if they never got to Stan?”

Nancy: “Well, there’s nothing you can do about it now. I wish we would’ve hid out in our cabin, is what.”

Edith: “You’re right, of course. Nothing I can do. And as far as you hiding out, they’d find you sooner or later.”

Mary: “I’ve heard that when they find a cabin in the woods, they bring the bulldozers or set it on fire.”

June: “I’ve heard that, too. Also they barricade the old roads; all the logging trails make them impassable.

“We worked 20 years on our cabin, every vacation, up in northern Wisconsin. This last year was the first year we didn’t bust our guts on it so when we retired it would be finished, and paid off, too. Ready for the government to burn it all down, is what we did.” She starts to cry.

The other women gather around her and we hear murmurs of “At least you’re alive” and “You still have the land.”

Light above the women dims as the light on the men’s side brightens.

Steve: “What you say, Stan? Ready to get out of here?”

Stan: “Are you kidding. I‘m telling you, one more day, one more day to sit through another stupid class about how it’s in our favor that we’re not on the gold standard and I’ll scream.”

Mike: “Don’t talk too loud. There’s all kinds of little Obot snitches around. If they think you haven’t bought into all their made-up hype, they’ll just keep you and your wife here until you do. So watch it.”

Steve: “Well, it’s been everything but fun. If anything, this stupid ‘Camp Fun’ is going to get me to the voting booth so idiot ideas like this never get off the drawing board.”

Choruses of “You got that right” echo throughout the barracks.

Curtain rises on a cutaway of a bus. We see the men and women that we saw in the barracks, but this time dressed as they arrived at the camp.

Mary: “Golly, weeks of nothing but ‘fun.’ If I ever say I want any more fun like that then send me to a gulag. ‘Camp Fun?’ More like some set of a horror film. ‘Reeducation camp’ is more like it. God, I hate that place!”

Steve: “Look, let’s get serious here. It would be stupid to underestimate these jerks. We had to be on camera every minute we were in that madhouse, hearing that Hillary statue give speeches constantly. Reminded me of the stories about Castro talking for hours and hours, on and on, boring and boring. There’s just got to be more than meets the eye.”

June: “Remember that first day? We had to eat that horrible Jello and then we slept for, like, 15 straight hours? Okay, they drugged us, but not before they did some kind of medical stuff to us.”

Edith: “I had the exact same thought. An implant or something, you think?”

Mike: “Could very well be. Trust this government? Not a chance. We didn’t have any fun. All we learned was that the Fed is our best friend and not to wish for our money to really be worth anything, like backed by gold. ‘Thou shall not question the Federal Reserve.’ I’d say that about sums it up.”

Steve: “Edith may very well have the answer, but my question is what kind of device. For all we know it could be a poison gizmo, so that if we say anything bad about Hillary or any Obot they send a signal and we keel over dead, maybe die of a heart attack.”

Stan: “I remember, just after Obama got elected, that some cop didn’t want people filming from the sidewalk. Someone said that the sidewalk was public property and the Supreme Court ruled that anyone could film anything they wanted to. The cop said, ‘No you can’t. This ain’t America no more.’”

Chorus of “You got that right” is heard.

Then someone says, out of the blue, “Good Tidings, Comrade,” and that phrase is repeated as the curtain starts to lower. The sound of distant thunder can also be heard and increases in volume as the curtain is closed.