THE MAKINGS OF A “COMPUTER-GENERATED FORGERY”

(Mar. 7, 2015) — In September 2011, Maricopa County, AZ Sheriff Joe Arpaio commissioned his Cold Case Posse to conduct an investigation into the image posted on the White House website on April 27 of that year, released in an apparent effort to convince the public that Obama was born in the U.S. and was therefore eligible to serve as president.

Article II, Section 1, clause 5 of the U.S. Constitution requires the president and commander-in-chief to be a “natural born Citizen,” which history shows meant “born in the country to citizen parents.”  However, modern interpretation is believed to mean a simple birth on U.S. soil without regard to the parents’ citizenship.

Earlier in 2011, business mogul Donald Trump publicly called for Obama to release his “long-form” birth certificate in the wake of a dearth of documentation on America’s first black president and among credible reports that he was born in Kenya or Indonesia.

In June 2008, a short-form Certification of Live Birth had appeared on The Daily KOS website from an undisclosed source.  Later, the same image appeared to have been published on Obama’s campaign website, FigththeSmears, which is now offline and cannot be accessed through the Wayback Machine as discovered by The Post & Email several months ago.

The “Certification” image was denounced as a forgery by many, including experts, and the Hawaii Department of Health refused to confirm its authenticity.

On March 1, 2012, Cold Case Posse lead investigator Mike Zullo and Arpaio announced at a press conference that the long-form birth certificate image and Obama’s Selective Service registration form were found to be “computer-generated forgeries.”  The mainstream press failed to investigate or report the findings other than on the internet, and in November 2012, Obama was reportedly re-elected by a relatively uninformed electorate in regard to the forgeries. 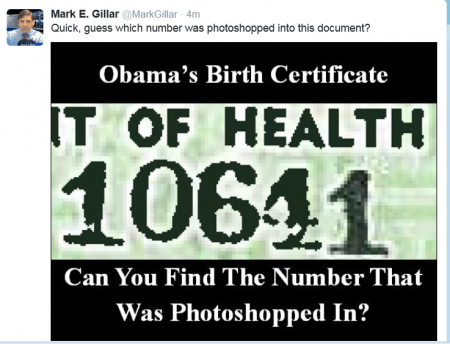 to which The Post & Email immediately replied, “The second ‘1’?”

Gillar did not immediately respond to our answer on Twitter but responded by email a few minutes after we sent him a message.

In December 2013, Gillar produced and released a video about the investigation stating that “prosecutions are coming” and “witnesses will testify.”  A brief addition to the video appeared to identify suspects in the forgery of Obama’s documents as “HDOH,” “USPS,” “SSS,” “Obots,” and a question mark on Obama’s silhouette.

The video was posted on December 9, two days before the alleged death of then-Hawaii Health Department Director Loretta J. Fuddy, whose small aircraft reportedly was forced to make a water landing after its engine failed.

In late 2013, Zullo stated that a press conference on further findings gleaned from a second investigation opened by Arpaio would be held, most likely in March 2014, but new discoveries presented a new path of inquiry and a delay in the release of any new information.

In recent months, Zullo has not spoken publicly.  In late January, radio host Carl Gallups, who, like Gillar, has been close to the investigation, stated that “legal hurdles” were in the process of “being overcome” by investigators prior to any announcement being made.

As of press time, no other Twitter response to Gillar’s question was apparent to this writer.

The Post & Email is awaiting Gillar’s permission to publish or request to withhold his response to our answer regarding the “photoshopped number.”