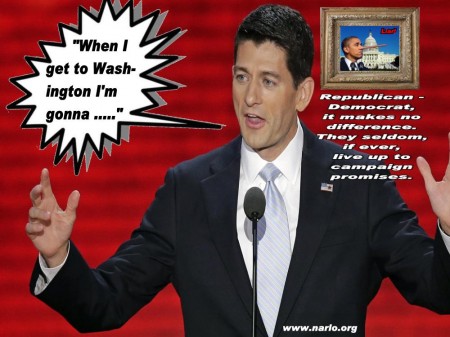 We’ve all heard them on the campaign trail when the political candidate says; “When I get to Washington I’m going to do this, this and this.”  They might even mean it at the time, but when they do get to Washington, they are sat down in a closed-door session with the party elite and the “system” is explained to them, in no uncertain terms.  The new, idealist politician is told to either toe the party line or lose any chance at committee assignments, or more importantly, money for their re-election.  So like good little boys and girls who are addicted to the elixir of power, they toe the line.  Mavericks, idealists, or those guided by principle don’t last long in the “system,” no matter which party.

If they aren’t addicted to the elixir of power, they soon become addicted to the elixir of money.  Part of “toeing the line” is working with the lobbyists. Since 1998 the amount of money spent on lobbying in Washington, DC has more than doubled from $1.45 Billion in 1998 to $3.21 Billion in 2014.  That’s billions, folks.  The number of actual paid lobbyists in Washington, DC, although the number has decreased in recent years, was as high as 14,489 in 2006.   The natural question to ask is, where does all that money go? (Source: https://www.opensecrets.org/lobby/

Being addicted to anything can lead to more addiction, crime, corruption, graft, bribery, payoffs and collusion and can even lead to infidelity, mistresses, illicit sex and divorce, or $90,000 in cash salted away in a politician’s freezer.  Being addicted to political power and money only magnifies the addictive behavior.  In Washington, DC it is a highly communicable disease with no cure.  Once the politician, judge, or bureaucrat arrives in the nation’s capital, they are infected.  Only those with the greatest willpower can resist the pressure put on politicians to forsake principle for power and money.  Sadly, those with the greatest willpower to resist power and money very seldom have long futures in politics.

Unfortunately, it gets worse when the fourth estate (news media), whose constitutional duty it is to expose corruption in politics, joins the corruption.  To give you an idea of the collusion and incestuous relationships between the fourth estate and politicians, one only needs to see who is running the show at the major media outlets.  Here is a sample:

As a case in point about the Internet, how many of you have received the email with a 19-second video clip by President Obama, allegedly at the Bilderberg meeting in Brussels in May of 2014, calling for a new world order and that the people are not informed enough for self-government?  In effect,  Obama says in the clip that the people must bow to the world elite.  It turns out that this video was a masterful bit of dubbing, cutting and pasting.  It looks real, but it is a hoax.  Nevertheless, we still hold Obama in contempt. Learn more about the hoax at this link. http://fellowshipoftheminds.com/2014/06/28/did-obama-really-declare-a-nwo-at-bilderberg/

Even the much-touted Fox News is guilty of misinformation and intentional bias.  O’Reilly’s “The O’Reilly Factor” is so full of his own arrogance and his brow-beating of guests as a result, hardly deserves the accolade of the “No Spin Zone.”  Arrogance is his name and spin is his game.  But then O’Reilly isn’t alone in the news media spin game.  Have you watched the other cable news channels such as MSNBC or CNN, or the Mainstream ABC, NBC or CBS?  Talk about spin and bias!  It’s rampant.

This political corruption and collusion is not limited to just federal politics.  It goes down to the state and the local level as well.  Many people say that there is no difference between Democrats and Republicans, and they are probably right.  We have an example that proves that point in spades right here in Washington State.  They don’t call us the “Left” Coast for nothing.

The Washington State legislature is currently debating a massive $15 Billion transportation bill that includes a 12-cent-per-gallon increase (actually 11.7 cents) in the gas tax for roads, bridges and other infrastructure.  Now keep in mind that the legislature already passed a 9.5-cent per gallon increase in the gas tax for the same reason in 2005.

The bill is being debated in the Transportation Committee, chaired by a Republican Senator, one Curtis King of Yakima, WA, a sanctuary city and county for tens of thousands of illegal aliens.  So Senator King, in the usual political arrogance, appeared on a local radio show and in an ala-Harvard-Professor-Gruber moment, called the voters and his constituents little children who had to be guided by his infinite wisdom. (see: https://soundcloud.com/law-and-liberty-radio/senator-curtis-king-on-taxpayers-as-children)

So this Republican, who professes to be one, is all for a giant tax increase, along with all the Democrats who never found a tax they didn’t like.

We responded to the “good” Senator with:

As a national author on freedom, liberty and property rights issues, I never resort to expletives, except maybe for an occasional Hell or Damn.  But your comments about the voters and your constituents being children left me with nothing but expletives streaming from my mind and my mouth.

How dare you elevate your self as superior over the people you are supposed to represent.  You sound like Professor Gruber from Harvard saying the people are stupid when it comes to health care and the only way to get Health Care passed was to dupe them …. BECAUSE THEY ARE STUPID, as he says.  How are you any different than Prof. Gruber?

I’ll pit my mind and knowledge of the issues against your mind any day of the week.  Now I don’t know about your constituents in Yakima, who are probably mostly ignorant illegal alien peasants who get driver’s licenses and vote, but the rest of us in Washington State are a hell of a lot smarter about the issues facing the State than you are, because you see Senator King, we have to pay the damn bills you run up in the legislature.

In 2005 you convinced us in Washington State that the state had to raise the gas tax by 9.5 cents per gallon to pay for roads, bridges and other infrastructure.

WHAT HAPPENED TO THE 9.5 CENTS SENATOR KING?

IT’S STILL THERE.  WHAT IS IT PAYING FOR?  THAT 9.5 CENTS WAS LOADED WITH ENVIRONMENTAL CRAP THAT IF IN PLACE AT THE TIME WE BUILT THE U. S. FREEWAY SYSTEM, THE FREEWAYS WOULD HAVE NEVER BEEN BUILT.

WHY ON EARTH DO YOU NEED 12 CENTS MORE?  PROBABLY FOR MORE ENVIRONMENTAL CRAP.

You call yourself a Republican, which should mean you believe in limited government and less taxes.  If not, then you are just a RINO, or a Democrat in Republican garb.  Since you are an apparent fraud, I call on you to resign.

But you won’t resign because you are a fraud, you are arrogant, and you certainly don’t represent the Republicans in Washington State, much less in the 14th Legislative District.

You are just another reason why Republicans are no different than Democrats and all you want is more of our tax money to pay for more and more social services and mega projects with huge cost overruns to buy off voters or business for their votes.

Who gets bought off with the 12 cents Senator King?

You, and all others like you, spit in the eye of every hard working citizen of this state who are robbed blind to pay for your corruption.  This isn’t America.   It is a racket, engaged in racketeering.

Our message was also sent to the local news media, the entire Washington State Legislature, the State GOP, a couple of local talk show hosts and a large list of local voters.

And there is more.  Right now, the Republicans in the U.S. Senate, even with a significant majority, can’t seem to override the power of Harry Reid’s Democrats in getting conservative legislation passed.  When the Democrats were in the majority, they had no trouble pulling dirty tricks to stop the Republicans.  Are Republicans just too nice to win in the game of dirty politics, OR are they just like Democrats?

So we stick by our charge of most politicians being worthless, toothless, spineless and without honor and not just because of the Washington State Republican Senator we took to task.  He is just one politician.  The problem is, his actions are parroted by thousands of other local, state and federal politicians, Republican or Democrat.

And corruption doesn’t stop at the door of politicians.  Judges are illegally legislating from the bench.  Our court system does not dispense justice; it is a legal system run amok where the “system” is king and justice is a possible side effect.  Bureaucrats are passing rule after rule, in violation of Article I, Section 1 of the U.S. Constitution.  No one in government is following the constitution, including the judicial branch.  No one is held accountable and all are essentially immune from prosecution ….. by law.  After being caught doing something wrong they either get large bonuses from your tax money, or they are promoted, or they retire with a huge pension.

Ladies and gentlemen, if we cannot “kill” the corruption in politicians, judges and bureaucrats, we cannot save America.  It’s that simple.  We are trying to expose this corruption by going after it at the county level, all across America, through our organization known as the “Exclosers“.  If you really want to do something about reversing the suicidal course that America is on, click on the link “HERE.”

Once again, we are trying to assess the interest in our weekly column.If you LIKE this specific column, click on this link:

mailto:info@narlo.org?subject=honorless-a.  After clicking on the link then hit SEND.

One Response to "Politicians – Worthless, Toothless, Spineless and Honorless"