“AN OSTRICH WITH ITS HEAD IN THE SAND” 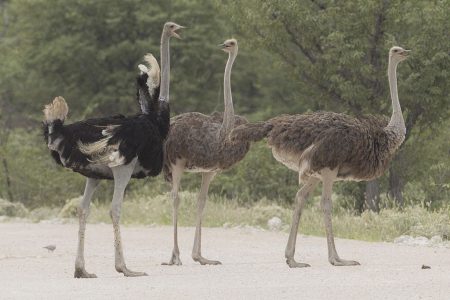 (Feb. 10, 2015) — In the early 1930’s, the Department of State wished to portray a certain image, so they had a contest: name an object that best portrays the lofty goals of State, was how the question read. Please submit your suggestion to your department head.

Thousands of entries were submitted, and since the general consensus was that “whatever happens over there doesn’t affect us over here,” many pictures of large and imposing castles and fortresses were offered. From the animal kingdom, photos of bears hibernating and baby kangaroos poking out from their mother’s pouch were sent in. But the overwhelming majority of the entries were of an Ostrich with its head in the sand, and that’s the one that was chosen to represent the “Philosophy of Containment.”

Remember, this was the time of “isolation” and “not our problem.”  America’s goal during World War I was to just put out the fire and come home, which is what we did. Trouble was, thanks to mustard gas, many Veterans came home in really bad shape and lingered for years before they died. This was a time when the government didn’t hide wounded warriors from the public eye, so every street corner in every big city had a Vet without various limbs and/or coughing with a cup held out.

France and the rest of the Allies really put the screws to Germany after World War I, so much so that the way was paved for a maniac such as Hitler to rise from the ashes and take over Germany, which was pretty easy since this was a time of hyper-inflation, thanks to, mainly, France.

But that’s water over the dam. So when Hitler started to rattle his sabers and bomb London, our State Department’s goal was to keep the war over there over there. The mob, the Cosa Nostra, also has a similar outlook on the realities of life. No, they don’t use the word “containment;” they use “protection,” as in “You do whatever I tell you to do and you pay me for that privilege, that honor.”

Getting back to Organized Crime, if a client, a stockholder, if you will, doesn’t make the payoff (maybe it just slipped their mind; maybe they forgot; maybe they didn’t have the money), the soldiers of the mob enforce the rules, as in immediately. NOW, not later. Not tomorrow but now.

And therein lies the problem: “containment” hasn’t worked, it’s never worked. The Muslim immigration problem is so severe that Europe has been overrun. England is so far gone that they’re lost, perhaps forever. And here in America, the Muslim immigration problem is so overwhelming that, because State couldn’t handle the load, a whole new government agency had to be created (Homeland Security) to help the Muslim immigrants get relocated to their terrorist training camps or to specific locations around our country.

Specific school districts have been canvassed by DHS to place Muslim children in every class. Colleges and universities have also been targeted. The result is that, ever so slowly but ever so inexorably, subtle changes in calendar dates, school curriculum, and dress codes have been taking place before our very eyes. Grocery stores have made unnoticeable changes, as have television commercials and movies from Hollywood. All this is done in advancing the Muslim agenda.

State’s logo, that of an Ostrich with its head in the sand, never did cut it, and it still doesn’t work for us, and throw in the TSA and the DHS, not to mention the DOJ, and we’re in real trouble. The mob has a rule of war: by the time you even think of a reprisal, we’re doing the same (or worse) to you now. In other words, do unto others before they would do the same unto you.

These Muslims in our country must be deported. Now, if these burnings and beheadings aren’t enough for you; if you still don’t get it; if you still consider Islam as a misunderstood “religion,” read about what happened to the school children in Beslan, Russian Federation, 2004. You’ll never say “peaceful” in referring to Islam again.

“Containment” works only if you’re willing to follow through with immediate reprisals, something that’ll get their attention and be remembered. It all starts with America’s foreign policy and the willingness to back it up. Get a mob Godfather to be our Secretary of State and see how long it takes to put us back on the right track.

The Philosophy of Containment added on Tuesday, February 10, 2015

One Response to "The Philosophy of Containment"