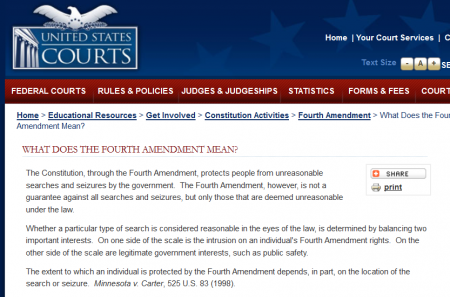 Just two weeks into this year’s legislative season, and with many legislatures not even in session yet, legislators in four states have already introduced bills to ban material support or resources to any federal agency engaged in warrantless spying.

These bills not only support efforts to turn off NSA’s water in Utah, but would also have practical effects on federal surveillance programs if passed.

Legislators in South Carolina, Missouri, Alaska and Indiana have all filed versions of the Fourth Amendment Protection Act, and representatives in eight other states have committed to introduce similar bills this year. Sources close to OffNow suggest even more bills will get introduced before the legislative season ends in spring.

“To have four bills already filed, and commitments from eight more legislators – on top of having a bill in Utah set to move forward that would set the stage to turn off the water at the Bluffdale data center – this is really beyond our expectations this early in the session,” OffNow executive director Mike Maharrey said. “I think Americans are sick of being spied on, and they are sick of empty reform talk by D.C. politicians. I think this movement at the state level is indicative of the American people saying, ‘Fine! If you can’t get things fixed in Washington, we’ll fix it through our states.’”

Following model language drafted by OffNow, the Fourth Amendment Protection Act legislation supports actions in Utah and would have a practical effect in any state that passes it.

The original definition of “material support or resources” included providing tangible support such as money, goods, and materials and also less concrete support, such as “personnel” and “training.” Section 805 of the PATRIOT ACT expanded the definition to include “expert advice or assistance.”

Practically-speaking, the legislation would almost certainly stop the NSA from ever setting up a new facility in a state with this law.

But the legislation isn’t just meant to keep the NSA out. It have practical ramifications in the here and now.

The bill includes a prohibition on participation in the illegal collection and use of electronic data and metadata by the state. That would stop the practical effect of what former NSA Chief Technical Director William Binney called the country’s “greatest threat since the Civil War.”

Reuters revealed the extent of NSA data sharing with state and local law enforcement in an August 2013 article. According to documents obtained by the news agency, the NSA passes information to police through a formerly secret DEA unit known Special Operations Divisions and the cases “rarely involve national security issues.” Almost all of the information involves regular criminal investigations, not terror-related investigations.

In other words, not only does the NSA collect and store this data. using it to  build profiles, the agency  encourages state and local law enforcement to violate the Fourth Amendment by making use of this information in their day-to-day investigations.

This is “the most threatening situation to our constitutional republic since the Civil War,” Binney said.

The bill would ban the state from obtaining or making use of electronic data or metadata obtained by the NSA without a warrant, and make such information inadmissible in state court proceedings.

These bills would also set the stage to end partnerships between the NSA and state universities.

The legislation rests on a well-established legal principle known as the anti-commandeering doctrine. The Supreme Court consistently held that the federal government cannot force states to assist or provide assets for the implementation or enforcement of federal acts or programs.

Maharrey said he was thrilled with the early momentum and extremely excited about the future of the movement.

“Forty years ago, U.S. Sen. Frank Church warned us about the NSA, saying that the surveillance state had the potential for imposing ‘total tyranny.’ This was before cell phones, before the proliferation of email and before widespread use of the Internet. If the NSA was dangerous in 1975, imagine what it is today,” Maharrey said. “In 40 years, Congress has done nothing to rein in the NSA. In fact, it has just made it stronger. We can’t count on D.C. to fix a problem it created. That’s why this action at the state level is so important and exciting.”

The OffNow Project is an organization committed to stopping unconstitutional NSA spying and reining in the surveillance-state through state and local activism.

Four and Counting: States Consider Bill to Turn Off Resources to the NSA pb added on Tuesday, January 20, 2015

One Response to "Four and Counting: States Consider Bill to Turn Off Resources to the NSA pb"