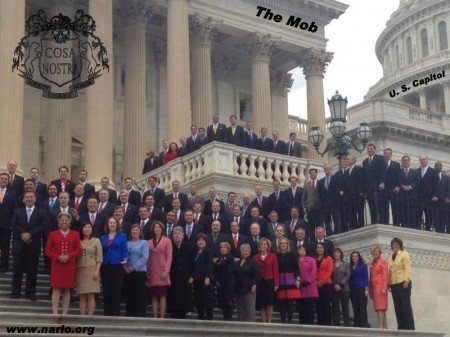 (Jan. 4, 2015) — A long, torturous human history has proven that without discipline, accountability and oversight, a child, an adult, a group of adults, or an institutional entity will slowly increase or exert his, her, or its power over time, even if there are laws or rules that restrict that power.  Such is the case in America today.  Government, especially the federal government, has far exceeded its constitutional limits. In a long vacuum of accountability and oversight, the federal government has evolved into increasing malfeasance, misfeasance, misappropriation of funds, graft, cronyism, nepotism, corruption, racketeering, double-dealing, collusion and improper or illicit personal behavior.  It is not a case of what limits government.  It has now become a case of whatever government wants to do without limits.   No limits on power are the ingredients for corruption, racketeering and eventually a dictatorship.

CORRUPTION DEFINED:  Wrongdoing on the part of an authority or powerful party through means that are illegitimate, immoral, or incompatible with ethical standards.  Corruption often results from patronage and is associated with bribery.  It is also defined as abuse of public office for private gain.  Corruption manifests itself in the form of bribes, extortion, graft, patronage, nepotism, cronyism, theft, embezzlement and diversion of public or private revenues or assets.  It exists in all cultures, countries, religions and institutions in different degrees of severity.  Corruption is, in fact, a negative human characteristic that is only offset by individual and societal honor, integrity and morality.

Ladies and gentlemen, whenever you hear a politician say “My Fellow Americans,” the hair should rise up on the back of your neck and you should check your wallet to see if there is any money left in it.  The politician is not your “fellow” American.  He is a member of the privileged class and the only time he really cares about you is at election time.

Leading up to the election he will lie through his teeth to get you to vote for him ….. or her.  He will vigorously run down his opponent as being corrupt, inexperienced and unworthy.  Once in office, he will aid and abet the waste, fraud and abuse of your money.  In direct violation of his oath of office to preserve, protect and defend the U.S. Constitution, HE WILL NOT oversee and hold the federal bureaucracy accountable (Article 1, Section 1).  He can easily be bought by wealthy special interest groups and will grant favors to his relatives, friends and business associates.  He will vote for the passage of laws that he never reads.  He will add his vote to a law to which billions of taxpayer dollars are attached when he knows full well America is broke and deep in debt.  In the spirit of compromise, he will trash his principles, if he has any.  The examples are almost endless.

He likes the federal bureaucracy because the special interests that influence the bureaucracies send him campaign donations for the same reason.  He especially likes the IRS because it assures him the aggressive collection of the money he wants and needs to continue his socialist and radical environmental agenda and opulent lifestyle.

What is even more infuriating is that very few of these politicians, judges, or bureaucrats have been impeached, fined, censured, excoriated, or gone to jail as punishment for their crimes, corrupt behavior and racketeering.  This activity in government and even in private business has become so commonplace that the perpetrators believe what they are doing is perfectly moral and legal.  In contrast, most of the people just don’t care.

Government oversight of itself is a joke, and those in government who are watching each other are the proverbial fox guarding the hen house.  As a result, most of America’s institutions are corrupt as well, and they have been growing more corrupt since the early 1900s.  Corruption is embedded throughout the fabric of all government, local, state, or federal.

The $1.1 Trillion, 1,600-page Omnibus Bill, just passed by the House and Senate in December and signed by the President is a prime example.  Just like Obama’s almost $1 Trillion Stimulus Bill passed by the Democrats in 2010, the 2014 Omnibus Bill is so full of pork and special favors for special interests, it is a stiff poke in the eye for every American and a raid on their wallets and constitutional rights.  Additionally, it is estimated that government wastes as much as 20% of its budget (your taxpayer dollars) to fraud and abuse.  In the current Omnibus Bill, that amounts to $220,000,000,000.  $220 Billion Dollars ….. WASTED, AND THEY HAVE TO BORROW THE MONEY TO PAY IT!  Why isn’t every American seething with anger?!

By passing the Omnibus Bill with the Democrats, the Republicans rolled over to the President’s lawlessness on immigration and other illegal actions he has taken.  The Omnibus Bill hardly represented what the people voted for in November 2014 when they gave the Senate back to the Republicans.  But then, as many of us know, it is business as usual in the racketeering capital of America, no matter on which side of the aisle this privileged class hangs their hats.

One hundred plus years of giving the federal government its head and not resisting each grab of power reserved unto the states and the people in the Tenth Amendment to the U.S. Constitution has led to a central government with almost virtual absolute power over the people.  A totally unchecked fourth branch of government, now existing in the ever-expanding federal bureaucracies, has turned the Bill of Rights into just so much meaningless mush.    Just try using your alleged constitutional property rights in defense against punitive actions levied by the EPA or your local land use department.

This institutionalized corruption has become systemic at every level of government where graft, payoffs, bribes, nepotism, cronyism, legislating from the bench and unconstitutional lawmaking are the rule rather than the exception.  Businesses are corrupt, unions are corrupt and our entire public education system is corrupt, including all of our liberal colleges.  Our judicial system of judges and attorneys is so corrupt it makes justice more than just blind; it makes it a fraud and a domain  that only the rich can afford.  Wealthy special interest groups have more power to influence legislation than the average citizen.  This all leads to collusion and racketeering between the parties that are in bed with government.

RACKETEERING: Traditionally, racketeering is defined as obtaining or extorting money illegally or carrying on illegal business activities, usually by Organized Crime.  It is a pattern of illegal activity carried out as part of an enterprise that is owned or controlled by those who are engaged in the illegal activity.  The latter definition derives from the federal Racketeer Influenced and Corruption Organizations Act (RICO), a set of laws (18 U.S.C.A. § 1961 et seq. [1970]) specifically designed to punish racketeering by business enterprises.

Isn’t it interesting that the government passed a law against racketeering in business but didn’t include punishments for the same type of illegal activities in government?  Sure, there are federal laws on the books that call what they are doing illegal, but the only people who have enforcement authority for those laws are the very same people breaking the laws.  Has anyone heard of Rangel, Frank, Traficant, Cunningham, or Barack Hussein Obama?

Social Security, Medicare and Medicaid are in fact under-funded, government-sponsored Ponzi schemes destined for bankruptcy, a fraud and a racket by any definition.  The IRS has become nothing more than a protection racket to extort money illegally from the hapless, brainwashed taxpayer to pay for the Ponzi schemes and the interest profits of the Federal Reserve.

What is hard for most people to understand is that it is always about power.  In a democracy, votes are the power.  Throughout history, socialists or dictators in every country found that they could remain in power by exploiting the weakness in man by giving him something for free in exchange for his or her vote.  That’s the epitome of graft and corruption.  It goes all the way back to the Romans and maybe further.  The people have been falling for this ploy for the last 3,000 years in country after country and century after century, to their own detriment, starvation and death.  And now this corruption and racketeering have infected America in the 20th and 21st centuries.

The political liar can’t be successful if the people will expose the lies.  Socialism is the biggest lie of all.  Socialism is the manifestation of a corrupt government that engages in racketeering for its own power and gain.   It exists in a dark world of unintended consequences and the law of diminishing returns.  Eventually, the socialists run out of other people’s money to distribute.  Then the riots begin, as in Greece and other socialist countries.  Hitler, Stalin and Mao all knew this, and when they couldn’t keep their promises, they started viciously intimidating the people at the point of a gun or starving and murdering them ….. by the millions.

In the end, after putting all the “isms” and parties aside, it is all about power over the masses by the elite few, overwhelming the masses in unpayable debt, making them debt slaves and conning them into paying for (with their taxes) unfunded, give-away Ponzi schemes for their votes, all hidden in the shadowy world of corruption and racketeering.

Without honor in government and in the people, a free society cannot exist.

So, ladies and gentlemen, how much would you give in money and time if you knew there was an effective, sure-fire way to peacefully break this cycle of corruption and racketeering in government and eventually in business?   Because, if the cycle can’t be broken peacefully, Americans face two choices: 1) capitulate to rising government power and become unwitting slaves, or, 2) revolt in open violence.  For those who know history and can impute the future from the past and current trends, the choice should be an easy one.  As a wise man once said, “If you open your eyes, you can’t be taken by surprise.“

For those whose eyes are open and would like to open them a little wider, we have a tremendous amount of information on our website (NARLO) about protecting yourself against a corrupt government.  It includes information about Agenda 21, relevant articles, a link to a list of weapons manuals, how to fight government without hiring a lawyer and other useful tools.  Don’t miss it.

The Federal Government is a Racket, Engaged in Racketeering added on Sunday, January 4, 2015

3 Responses to "The Federal Government is a Racket, Engaged in Racketeering"