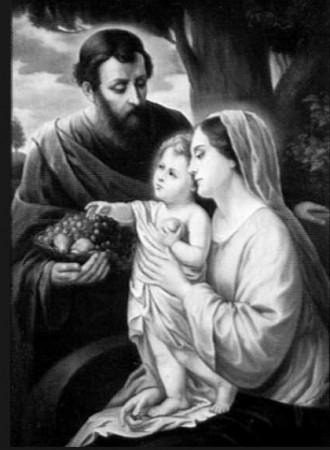 (Dec. 16, 2014) — The story of the birth of Jesus and His conception has been told for two millennia. Most Christian churches dedicate the entire month of December to singing Christmas carols, quoting Messianic prophecies, and other such traditional festivities that we associate with this very special time of year.  There have been songs and television movies written about the three Wise Men/Kings that bring gifts to the baby Jesus and even the fictitious little drummer boy. But one of the more interesting and admirable characters is given little attention. Joseph, God’s choice to father His son, is pictured standing next to Mary in nativity scenes around the world but his role is little more than decorative – right up there with the shepherds, the sheep, and the other manger animals. However, the life of Joseph and his faithfulness to God and his family is something that can be more than inspiring in this culture where fatherhood and manhood is grossly misunderstood and diminished.

To be sure, Mary’s role in history is unique and greatly to be respected and venerated.  She was chosen by God to not only birth but to raise and nurture the Messiah.  Joseph’s story, however, is usually shadowed by Mary’s Immaculate Conception.  So, let us take a few moments to appreciate the incredible man that Joseph was and the role he played in raising and nurturing the Christ child.

Joseph achieved what many devout believers today have trouble even conceptualizing.  He was a man who listened to God – even when the message would be unbelievable to most.  He displayed mercy instead of revenge when he was publicly humiliated, and he left his country to protect a child that did not carry his DNA. As a father he displayed the epitome of sacrificial love, and without hesitation always opted to protect and provide for his family.

His role in the Christmas story begins when he was betrothed to Mary, before they engaged in any intimacy. Everyone knew that they had not engaged in physical intimacy and then Mary turns up pregnant. In trying to appreciate Joseph, it is critical to understand that he was publicly humiliated as well as heartbroken over her betrayal.   Not only was Mary subject to harsh punishment for becoming pregnant out of wedlock, but Joseph became the laughing stock of the entire community.  Under the law and according to the customs of that time, he could have easily had Mary stoned to death.  But Joseph did no such thing.  In the midst of his humiliation and heartache, he was concerned for Mary – the very person that betrayed him and humiliated him before the entire town.  He knew the penalties for her betrayal and sought to have her sent away quietly and her life spared rather than take his justifiable revenge.  Justice was his for the taking but he opted for mercy instead.   This decision tells us something about the character and nature of the man.

There is more to understanding the uniqueness and righteousness of Joseph.  While he is thinking about how to resolve this situation without hurting Mary, an angel appears to him with an incredible message. The angel tells Joseph that Mary’s child was conceived by the Holy Spirit and is the fulfillment of Messianic prophecies.  Joseph never questions the unusualness of this message and reacts with total obedience. But he goes farther. Not only does he marry Mary but he refrains from having sexual relations with her until after the child is born.  Here we see a man that is obedient to God without questioning and who also respects his wife and the child she is carry to the point of depriving himself of the physical pleasures he is entitled to for their benefit.

Joseph chooses mercy over justice, self-control over self-indulgence and obedience over logic. He also demonstrates the ability to regard others more highly than himself, which is the ultimate in humility.

There is still more.
The drama and danger escalates when King Herod realizes that the Messiah’s birth is imminent and that it is prophesized that He will be born in Bethlehem.  As it so happens, Caesar had ordered a census be taken at this exact time, which required that all families return and be counted in the town of their ancestors.  This gave Herod a diabolic opportunity which he took by ordering the murder of all male children born in Bethlehem under the age of two.  Of course God was well aware of Herod’s plan and sent another angel to Joseph.  This angel warned Joseph in a dream and told him to take Mary and Jesus to live in Egypt until further notice.  Once again, Joseph obeys without hesitation.  But what did it cost Joseph?  He immediately packed up his new family and takes them to a foreign country.  It is easy to overlook the full implications of this move.  Joseph, without planning or any preparation, packs up his family and moves them – not to any foreign land – but to a land where Jews are not exactly welcomed.  He leaves his country, his family, his friends, and any strides he may have made in establishing his career – all to obey a God that told him the most incredible things and to protect a woman who had a child that did not physically belong to him.

There is still more.
The Bible tells us that Jesus is known as the son of Joseph, the carpenter’s son.  Again, the implications of this can be easily overlooked.  However, these notations tell us that Jesus was regarded solely as Joseph’s son, meaning Joseph became his father totally and completely – including teaching him the carpenter’s trade.  Joseph not only put aside his humiliation and protected Mary and the Christ child from being stoned, as well as being killed by Herod and giving up his homeland for them, but he took the role of father seriously.  Joseph was truly a remarkable man.  His humility and ability to take on responsibility that he could have easily avoided, and to sacrifice for his family against all odds is truly noteworthy and inspirational – especially in a day and age when young men abandon their own flesh and blood at an alarming rate and know nothing of self-sacrifice or placing the welfare of others before themselves.

It is true.
God knew what He was doing when He chose Mary to be the mother of Jesus but He also knew what He was doing when He chose Joseph to be the foster father to the Christ child.  The Bible is full of ordinary men and women doing extraordinary things, but Joseph should rate high on the list.  He was a man of great compassion and mercy, as well as obedience and self-sacrifice who always put his family first – regardless of the personal cost.  He is a man to be respected and a man to be emulated, and one we should be teaching our children about. Never since the beginning of world has there ever been a man like Joseph, the man God chose to raise His only begotten son.